In this page you can download PNG image - Dog food PNG. 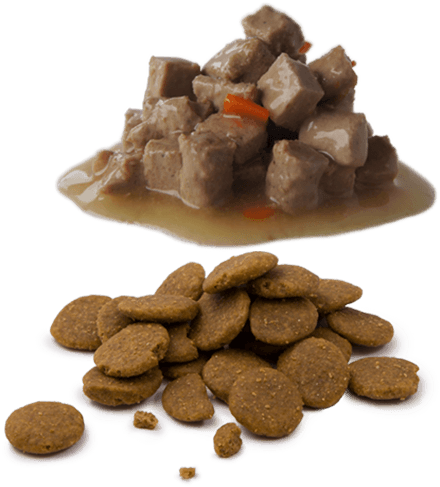 This image has format transparent PNG with resolution 440x487.
You can download this image in best resolution from this page and use it for design and web design.

Dog food is food specifically formulated and intended for consumption by dogs and other related canines. Dogs are considered to be omnivores with a carnivorous bias. They have the sharp, pointed teeth and shorter gastrointestinal tracts of carnivores, better suited for the consumption of meat than of vegetable substances, yet also have 10 genes that are responsible for starch and glucose digestion, as well as the ability to produce amylase, an enzyme that functions to break down carbohydrates into simple sugars - something that carnivores lack. Dogs have managed to adapt over thousands of years to survive on the meat and non-meat scraps and leftovers of human existence and thrive on a variety of foods, with studies suggesting dogs' ability to digest carbohydrates easily may be a key difference between dogs and wolves.

In the United States alone, the dog food market is expected to reach $23.3 billion by 2022.

Dry dog food usually consists of bagged kibble that contains 3-11% water. It makes up the vast majority of pet foods.

Dry food is both convenient and typically inexpensive, with over $8 billion worth being sold in 2010 – a 50% increase over just seven years earlier.

Dry food processing is popular in the pet food industry, as it is an efficient way to supply continuous production of feed in many varieties. It is energy efficient, allows for large amounts of feed to be used, and is cost effective.

To make dog kibble, a process known as extrusion is done. A simple extruder consists of a barrel, helical screws, and a die (tool to cut and shape food). Feed ingredients are solid at room temperature; therefore, the extrusion process of these ingredients requires a temperature above 100 degrees Celsius, achieved by the use of steam, hot water, or other heat sources in order to soften or melt the mixture and allow for fluidity through the barrel. During the extrusion process, the high amounts of pressure applied to the mixture forces it to enter through the die before exiting the extruder completely, where it is cut to its desired size by a rotating fly knife.

Unfortunately, the extrusion process actually denatures some of nutritional elements of the food. Taurine deficiency has been found in dogs and cats fed extruded commercial diets. Not usually considered an essential nutrient for dogs, taurine is plentiful in most whole meats, whether raw or cooked, but is reduced in extruded diets. Taurine deficiency could also be due to the use of rendered, highly processed meat sources that are low in taurine. Regardless of the cause, taurine is now artificially supplemented back into the diet after processing in the production of most commercial pet food.

Wet or canned dog food usually is packaged in a solid or soft-sided container. Wet food contains roughly 60-78% water, which is significantly higher in moisture than dry or semi-moist food. Canned food is commercially sterile (cooked during canning); other wet foods may not be sterile. Sterilizing is done through the process of retorting, which involves steam sterilization at 121 degrees Celsius. A given wet food will often be higher in protein or fat compared to a similar kibble on a dry matter basis (a measure which ignores moisture); given the canned food's high moisture content, however, a larger amount of canned food must be fed in order to meet the dog's required energy needs. Grain gluten and other protein gels may be used in wet dog food to create artificial meaty chunks, which look like real meat.