In this page you can download PNG image - Yuri Gagarin PNG. 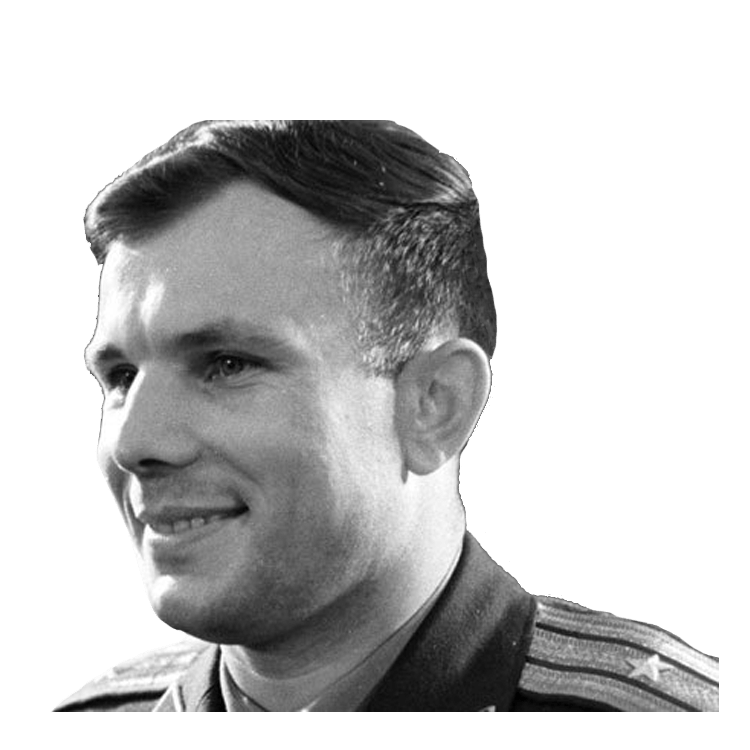 This image has format transparent PNG with resolution 750x750.
You can download this image in best resolution from this page and use it for design and web design.

Yuri Alekseyevich Gagarin (9 March 1934 – 27 March 1968) was a Soviet pilot and cosmonaut. He was the first human to journey into outer space when his Vostok spacecraft completed an orbit of the Earth on 12 April 1961.

Gagarin became an international celebrity and was awarded many medals and titles, including Hero of the Soviet Union, the nation's highest honour. Vostok 1 marked his only spaceflight, but he served as backup crew to the Soyuz 1 mission (which ended in a fatal crash). Gagarin later became deputy training director of the Cosmonaut Training Centre outside Moscow, which was later named after him. Gagarin died in 1968 when the MiG-15 training jet he was piloting crashed. The F?d?ration A?ronautique Internationale awards the Yuri A. Gagarin Gold Medal in his honor.

Yuri Gagarin was born 9 March 1934 in the village of Klushino, near Gzhatsk (renamed Gagarin in 1968 after his death). His parents worked on a collective farm: Alexey Ivanovich Gagarin as a carpenter and bricklayer, and Anna Timofeyevna Gagarina as a milkmaid. Yuri was the third of four children: older brother Valentin, older sister Zoya, and younger brother Boris.

Like millions of people in the Soviet Union, the Gagarin family suffered during Nazi occupation in World War II. Klushino was occupied in November 1941 during the German advance on Moscow, and an officer took over the Gagarin residence. The family was allowed to build a mud hut, approximately 3 by 3 metres (10 by 10 ft) inside, on the land behind their house, where they spent a year and nine months until the end of the occupation. His two older siblings were deported by the Germans to Poland for slave labour in 1943, and did not return until after the war in 1945. In 1946, the family moved to Gzhatsk, where Gagarin continued his secondary education.

In 1950, Gagarin entered into an apprenticeship at age 16 as a foundryman at the Lyubertsy Steel Plant near Moscow, and also enrolled at a local "young workers" school for seventh grade evening classes. After graduating in 1951 from both the seventh grade and the vocational school with honours in moldmaking and foundry work, he was selected for further training at the Saratov Industrial Technical School, where he studied tractors. While in Saratov, Gagarin volunteered for weekend training as a Soviet air cadet at a local flying club, where he learned to fly — at first in a biplane and later in a Yak-18 trainer. He also earned extra money as a part-time dock laborer on the Volga River.

On 27 March 1968, while on a routine training flight from Chkalovsky Air Base, he and flight instructor Vladimir Seryogin died in a MiG-15UTI crash near the town of Kirzhach. The bodies of Gagarin and Seryogin were cremated and the ashes were buried in the walls of the Kremlin on Red Square.

Gagarin was survived by his wife Valentina, a graduate of the Orenburg medical school; and two daughters, Yelena (born 1959) and Galina (born 1961).