In this page you can download PNG image - Award trophy cup. 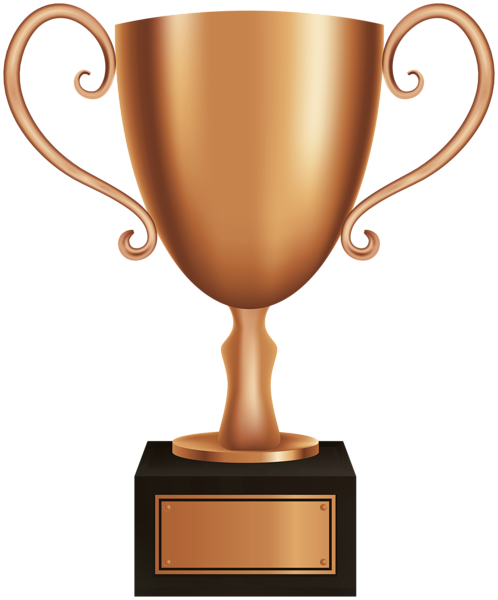 This image has format transparent PNG with resolution 498x600.
You can download this image in best resolution from this page and use it for design and web design.

A trophy is a tangible, durable reminder of a specific achievement, and serves as recognition or evidence of merit. Trophies are often awarded for sporting events, from youth sports to professional level athletics. In many sports medals (or, in North America, rings) are often given out either as the trophy or along with more traditional trophies.

Originally the word trophy, derived from the Greek tropaion, referred to arms, standards, other property, or human captives and body parts (e.g., headhunting) captured in battle. These war trophies commemorated the military victories of a state, army or individual combatant. In modern warfare trophy taking is discouraged, but this sense of the word is reflected in hunting trophies and human trophy collecting by serial killers.

In ancient Greece, the winners of the Olympic games initially received no trophies except laurel wreaths. Later the winner also received an amphora with sacred olive oil. In local games, the winners received different trophies, such as a tripod vase, a bronze shield or a silver cup.

In ancient Rome, money usually was given to winners instead of trophies.

Chalices were given to winners of sporting events at least as early as the very late 1600s in the New World. For example, the Kyp Cup (made by silversmith Jesse Kyp), a small, two-handled, sterling cup in the Henry Ford Museum, was given to the winner of a horse race between two towns in New England in about 1699. Chalices, particularly, are associated with sporting events, and were traditionally made in silver. Winners of horse races, and later boating and early automobile races, were the typical recipients of these trophies. The Davis Cup, Stanley Cup, America's Cup and numerous World Cups are all now famous cup-shaped trophies given to sports winners.

Today, the most common trophies are much less expensive, and thus much more pervasive, thanks to mass-produced plastic/resin trophies.

Contemporary trophies often depict an aspect of the event commemorated, for example in basketball tournaments, the trophy takes the shape of a basketball player, or a basketball. Trophies have been in the past objects of use such as two-handled cups, bowls, or mugs (all usually engraved); or representations such as statues of people, animals, and architecture while displaying words, numbers or images. While trophies traditionally have been made with metal figures, wood columns, and wood bases, in recent years they have been made with plastic figures and marble bases. This is to retain the weight traditionally associated with a quality award and make them more affordable to use as recognition items. Trophies increasingly have used resin depictions.

The Academy Awards Oscar is a trophy with a stylized human; the Hugo Award for science fiction is a space ship; and the Wimbledon awards for its singles champions are a large loving cup for men and a large silver plate for women.

A loving-cup trophy is a common variety of trophy; it is a cup shape, usually on a pedestal, with two or more handles, and is often made from silver or silver plate.