In this page you can download PNG image - Bank vault PNG. 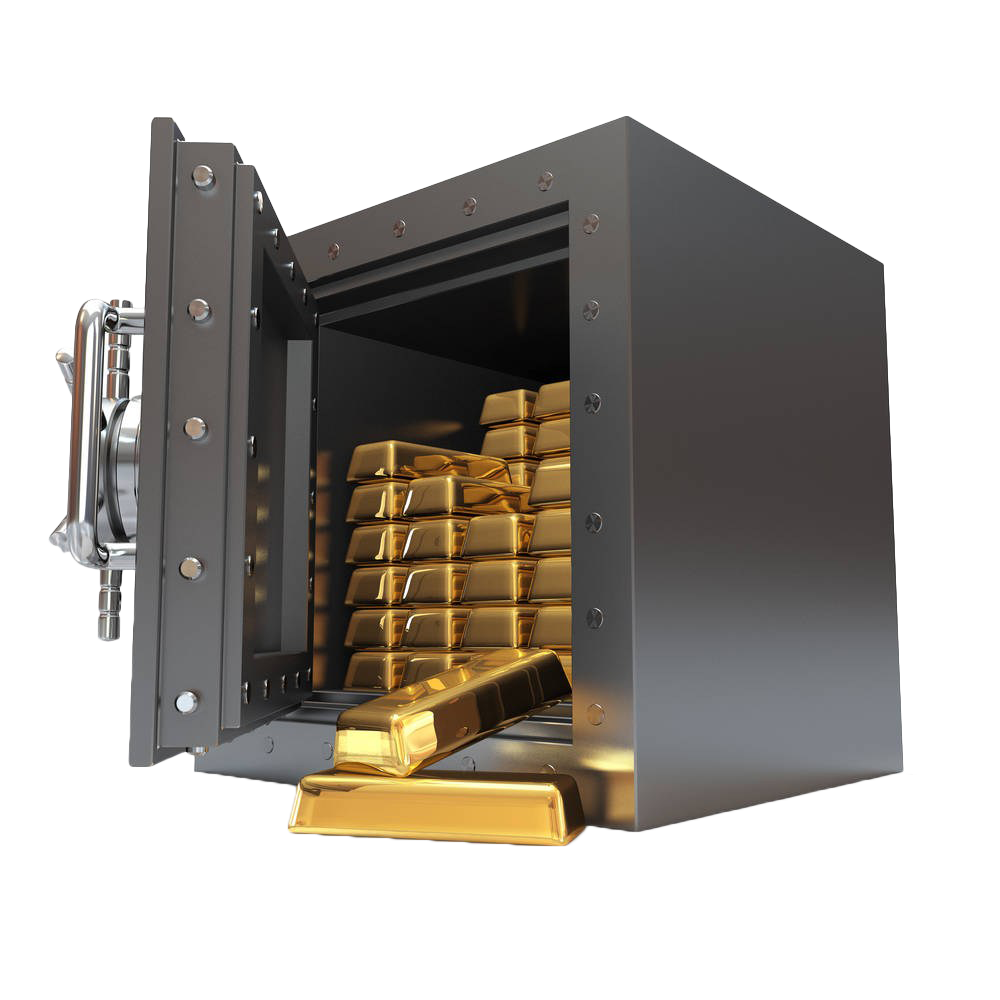 A bank vault is a secure space where money, valuables, records, and documents are stored. It is intended to protect their contents from theft, unauthorized use, fire, natural disasters, and other threats, much like a safe. Unlike safes, vaults are an integral part of the building within which they are built, using armored walls and a tightly fashioned door closed with a complex lock.

Historically, strongrooms were built in the basement of a bank where the ceilings were vaulted, hence the name. Modern bank vaults typically contain many safe deposit boxes, as well as places for teller cash drawers, and other valuable assets of the bank or its customers. They are also common in other buildings where valuables are kept such as post offices, grand hotels, rare book libraries and certain government ministries.

Vault technology developed in a type of arms race with bank robbers. As burglars came up with new ways to break into vaults, vault makers found new ways to foil them. Modern vaults may be armed with a wide array of alarms and anti-theft devices. Some 19th and early 20th century vaults were built so well that today they are difficult to destroy. These older vaults were typically made with steel-reinforced concrete. The walls were usually at least 1 ft (0.3 m) thick, and the door itself was typically 3.5 ft (1.1 m) thick. Total weight ran into the hundreds of tons (see the Federal Reserve Bank of Cleveland). Today vaults are made with thinner, lighter materials that, while still secure, are easier to dismantle than their earlier counterparts.

The need for secure storage stretches far back in time. The earliest known locks were made by the Egyptians. Ancient Romans used a more sophisticated locking system, called warded locks. Warded locks had special notches and grooves that made picking them more difficult. Lock technology advanced independently in ancient India, Russia, and China, where the combination lock is thought to have originated. In the United States, most banks relied on small iron safes fitted with a key lock up until the middle of the nineteenth century. After the Gold Rush of 1849, unsuccessful prospectors turned to robbing banks. The prospectors would often break into the bank using a pickaxe and hammer. The safe was usually small enough that the thief could get it out a window, and take it to a secluded spot to break it open.

Banks demanded more protection and safe makers responded by designing larger, heavier safes. Safes with a key lock were still vulnerable through the key hole, and bank robbers soon learned to blast off the door by pouring explosives in this opening. In 1861, inventor Linus Yale Jr. introduced the modern combination lock. Bankers quickly adopted Yale's lock for their safes, but bank robbers came up with several ways to get past the new invention. It was possible to use force to punch the combination lock through the door. Other experienced burglars learned to drill holes into the lock case and use mirrors to view the slots in the combination wheels inside the mechanism. A more direct approach was to simply kidnap the bank manager and force him to reveal the combination.

After the inventions of the combination lock, James Sargent—an employee of Yale—developed the "theft proof lock." This was a combination lock that worked on a timer. The vault or safe door could only be opened after a set number of hours had passed, thus a kidnapped bank employee could not open the lock in the middle of the night even under force. Time locks became widespread at banks in the 1870s. This reduced the kidnappings, but set bank robbers to work again at prying or blasting open vaults. Thieves developed tools for forcing open a tiny crack between the vault door and frame. As the crack widened, the thieves levered the door open or poured in gunpowder and blasted it off. Vault makers responded with a series of stair-stepped grooves in the door frame so the door could not be levered open. But these grooves proved ideal for a new weapon: liquid nitroglycerin. Professional bank robbers learned to boil dynamite in a kettle of water and skim the nitroglycerin off the top. They could drip this volatile liquid into the door grooves and destroy the door. Vault makers subsequently redesigned their doors so they closed with a thick, smooth, tapered plug. The plug fit so tightly that there was no room for the nitroglycerin.

By the 1920s, most banks avoided using safes and instead turned to gigantic, heavy vaults with walls and doors several feet thick. These were meant to withstand not only robbers but also angry mobs and natural disasters. Despite the new security measures, these vaults were still vulnerable to yet another new invention, the cutting torch. Burning oxygen and acetylene gas at about 6,000 °F (3,300 °C), the torch could easily cut through steel. It was in use as early as 1907, but became widespread with World War I. Robbers used cutting torches in over 200 bank robberies in 1924 alone. Manufacturers learned to sandwich a copper alloy into vault doors. If heated, the high thermal conductivity of copper dissipates the heat to prevent melting or burning. After this design improvement, bank burglaries fell off and were far less common at the end of the 1920s than at the beginning of the decade.

Technology continues in the race with bank robbers, coming up with new devices such as heat sensors, motion detectors, and alarms. Bank robbers have in turn developed even more technological tools to find ways around these systems. Although the number of bank robberies has been cut dramatically, they are still attempted.

Materials used in vaults and vault doors have changed as well. The earlier vaults had steel doors, but because these could easily be cut by torches, different materials were tried. Massive cast iron doors had more resistance to acetylene torches than steel. The modern preferred vault door material is the same concrete as used in the vault wall panels. It is usually clad in steel for cosmetic reasons.

Bank vaults are built as custom orders. The vault is usually the first aspect of a new bank building to be designed and built. The manufacturing process begins with the design of the vault, and the rest of the bank is built around it. The vault manufacturer consults with the customer to determine factors such as the total vault size, desired shape, and location of the door. After the customer signs off on the design, the manufacturer configures the equipment to make the vault panels and door. The customer usually orders the vault to be delivered and installed. That is, the vault manufacturer not only makes the vault parts, but brings the parts to the construction site and puts them together.

Bank vaults are typically made with steel-reinforced concrete. This material was not substantially different from that used in construction work. It relied on its immense thickness for strength. An ordinary vault from the middle of the 20th century might have been 18 in (45.72 cm) thick and was quite heavy and difficult to remove or remodel around. Modern bank vaults are now typically made of modular concrete panels using a special proprietary blend of concrete and additives for extreme strength. The concrete has been engineered for maximum crush resistance. A panel of this material, though only 3 in (7.62 cm) thick, may be up to 10 times as strong as an 18 in-thick (45.72-cm) panel of regular formula concrete.

There are at least two public examples of vaults withstanding a nuclear blast. The most famous is the Teikoku Bank in Hiroshima whose two Mosler Safe Company vaults survived the atomic blast with all contents intact. The bank manager wrote a congratulatory note to Mosler. A second is a vault at the Nevada National Security Site (formerly the Nevada Test Site) in which an above ground Mosler vault was one of many structures specifically constructed to be exposed to an atomic blast.

The vault door is also molded of special concrete used to make the panels, but it can be made in several ways. The door mold differs from the panel molds because there is a hole for the lock and the door will be clad in stainless steel. Some manufacturers use the steel cladding as the mold and pour the concrete directly into it. Other manufacturers use a regular mold and screw the steel on after the panel is dry.

Round vault doors were popular in the early 20th century and are iconic images for a bank's high security. They fell out of favor due to manufacturing complexities, maintenance issues (door sag due to weight) and cost, but a few examples are still available.

A day gate is a second door inside the main vault door frame used for limited vault protection while the main door is open. It is often made of open metal mesh or glass and is intended to keep a casual visitor out rather than to provide true security.