In this page you can download PNG image - Balaclava, mask PNG. 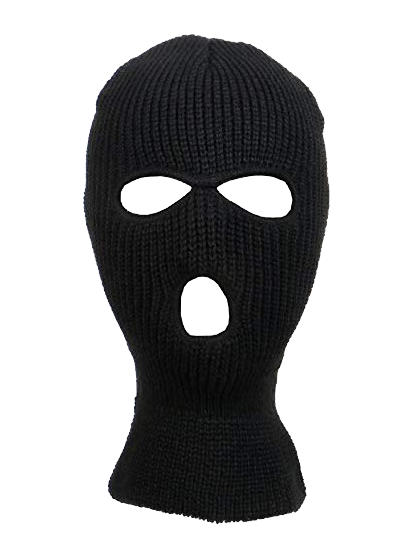 This image has format transparent PNG with resolution 413x549.
You can download this image in best resolution from this page and use it for design and web design.

A balaclava, also known as a balaclava helmet or ski mask, is a form of cloth headgear designed to expose only part of the face. Depending on style and how it is worn, only the eyes, mouth and nose, or just the front of the face are unprotected. Versions with a full face opening may be rolled into a hat to cover the crown of the head or folded down as a collar around the neck.

The name comes from their use at the Battle of Balaclava during the Crimean War, referring to the town near Sevastopol in the Crimea. British troops there wore knitted headgear, to keep warm.

Traditional balaclavas were knitted from wool. Modern versions are also made from silk, cotton, polypropylene, neoprene, acrylic, or polar fleece.

This type of headgear was known in the 19th century as an Uhlan cap or a Templar cap.

During the Crimean War in 1854, handmade balaclavas were sent over to the British troops to help protect them from the bitter cold weather. British troops required this aid, as their own supplies (warm clothing, weatherproof quarters, and food) never arrived in time. According to Richard Rutt in his History of Handknitting, the name "balaclava helmet" was not used during the war but appears much later, in 1881.