In this page you can download PNG image - Terminator PNG. 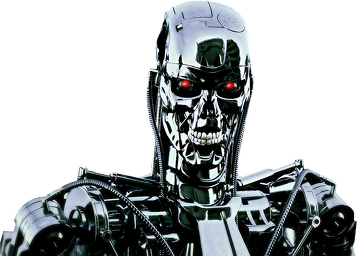 This image has format transparent PNG with resolution 357x256.
You can download this image in best resolution from this page and use it for design and web design.

The Terminator is a 1984 American science-fiction action film directed by James Cameron. It stars Arnold Schwarzenegger as the Terminator, a cyborg assassin sent back in time from 2029 to 1984 to kill Sarah Connor (Linda Hamilton), whose son will one day become a savior against machines in a post-apocalyptic future. Michael Biehn plays Kyle Reese, a soldier from the future sent back in time to protect Connor. The screenplay is credited to Cameron, along with producer Gale Anne Hurd. Executive producers John Daly and Derek Gibson of Hemdale Film Corporation were instrumental in the film's financing and production.

The Terminator topped the US box office for two weeks and helped launch Cameron's film career and solidify Schwarzenegger's. It received critical acclaim, with many praising its pacing, action scenes and Schwarzenegger's performance. Its success led to a franchise consisting of four sequels (Terminator 2: Judgment Day, Terminator 3: Rise of the Machines, Terminator Salvation and Terminator Genisys), a television series, comic books, novels and video games. In 2008, The Terminator was selected by the Library of Congress for preservation in the National Film Registry, being deemed "culturally, historically, or aesthetically significant".

In 1984 Los Angeles, a cyborg assassin known as a Terminator arrives from 2029 and steals guns and clothes. Shortly afterward, Kyle Reese, a human soldier from 2029, arrives. He steals clothes and evades the police. The Terminator begins systematically killing women named Sarah Connor, whose addresses he finds in the telephone directory. He tracks the third Sarah Connor to a nightclub, but Kyle rescues her. The two steal a car and escape with the Terminator pursuing them in a police car.

As they hide in a parking lot, Kyle explains to Sarah that an artificial intelligence defense network, known as Skynet, will become self-aware in the near future and initiate a nuclear holocaust. Sarah's future son John will rally the survivors and lead a resistance movement against Skynet and its army of machines. With the Resistance on the verge of victory, Skynet sent a Terminator back in time to kill Sarah before John is born, to prevent the formation of the Resistance. The Terminator is an efficient killing machine with a powerful metal endoskeleton and an external layer of living tissue that makes it appear human.

Kyle and Sarah are apprehended by the police after another encounter with the Terminator. Criminal psychologist Dr. Silberman concludes that Kyle is paranoid and delusional. The Terminator repairs his body and attacks the police station, killing many police officers in his attempt to locate Sarah. Kyle and Sarah escape, steal another car and take refuge in a motel, where they assemble pipe bombs and plan their next move. Kyle admits that he has been in love with Sarah since John gave him a photograph of her, and they have sex.

The Terminator kills Sarah's mother and impersonates her when Sarah, unaware of the Terminator's ability to mimic victims, attempts to contact her via telephone. When they realize he has reacquired them, they escape in a pickup truck. In the ensuing chase, Kyle is wounded by gunfire while throwing pipe bombs at the Terminator. Enraged‚ Sarah knocks the Terminator off his motorcycle but loses control of the truck, which flips over. The Terminator hijacks a tank truck and attempts to run down Sarah, but Kyle slides a pipe bomb onto the tanker, causing an explosion that burns the flesh from the Terminator's endoskeleton. It pursues them to a factory, where Kyle activates machinery to confuse the Terminator. He jams his final pipe bomb into the Terminator's abdomen, blowing the Terminator apart, injuring Sarah, and killing Kyle. The damaged Terminator reactivates and grabs Sarah. She breaks free and lures it into a hydraulic press, crushing it.

Months later, a pregnant Sarah is traveling through Mexico, recording audio tapes to pass on to her unborn son, John. She debates whether to tell him that Kyle is his father. At a gas station, a boy takes a Polaroid photograph of her which she purchases—the same photograph that John will eventually give to Kyle.

In this page you can download free PNG images: Terminator PNG images