In this page you can download PNG image - Hippo PNG. 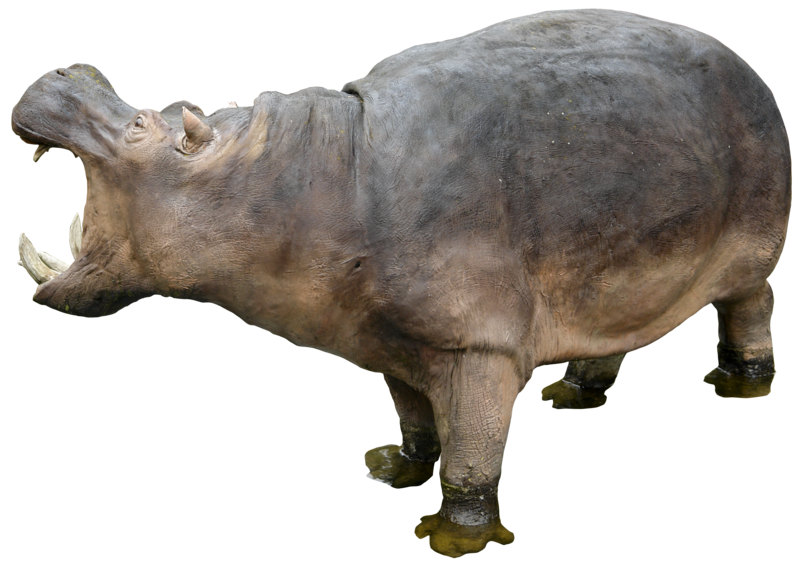 This image has format transparent PNG with resolution 800x562.
You can download this image in best resolution from this page and use it for design and web design.

The common hippopotamus (Hippopotamus amphibius), or hippo, is a large, mostly herbivorous mammal in sub-Saharan Africa, and one of only two extant species in the family Hippopotamidae, the other being the pygmy hippopotamus (Choeropsis liberiensis or Hexaprotodon liberiensis). The name comes from the ancient Greek for "river horse". After the elephant and rhinoceros, the common hippopotamus is the third-largest type of land mammal and the heaviest extant artiodactyl. Despite their physical resemblance to pigs and other terrestrial even-toed ungulates, the closest living relatives of the Hippopotamidae are cetaceans (whales, porpoises, etc.) from which they diverged about 55 million years ago. The common ancestor of whales and hippos split from other even-toed ungulates around 60 million years ago. The earliest known hippopotamus fossils, belonging to the genus Kenyapotamus in Africa, date to around 16 million years ago.

Common hippos are recognisable by their barrel-shaped torsos, wide-opening mouths revealing large canine tusks, nearly hairless bodies, columnar-like legs and large size; adults average 1,500 kg (3,300 lb) and 1,300 kg (2,900 lb) for males and females respectively, making them the largest species of land mammal after the three species of elephants and the white and Indian rhinoceros. Despite its stocky shape and short legs, it is capable of running 30 km/h (19 mph) over short distances. The hippopotamus is a highly aggressive and unpredictable animal and is ranked among the most dangerous animals in Africa. Nevertheless, they are still threatened by habitat loss and poaching for their meat and ivory canine teeth.

The common hippopotamus is semiaquatic, inhabiting rivers, lakes and mangrove swamps, where territorial bulls preside over a stretch of river and groups of five to thirty females and young. During the day, they remain cool by staying in the water or mud; reproduction and childbirth both occur in water. They emerge at dusk to graze on grasses. While hippopotamuses rest near each other in the water, grazing is a solitary activity and hippos are not territorial on land.