In this page you can download PNG image - Excavator PNG. 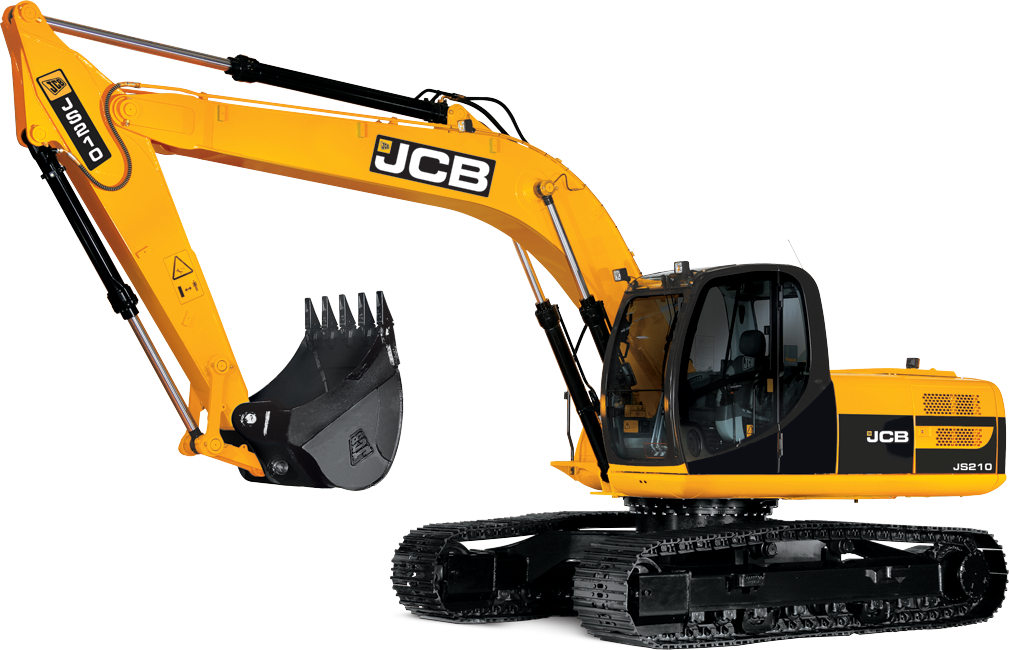 This image has format transparent PNG with resolution 1009x650.
You can download this image in best resolution from this page and use it for design and web design.

Excavators are heavy construction equipment consisting of a boom, dipper (or stick), bucket and cab on a rotating platform known as the "house". The house sits atop an undercarriage with tracks or wheels. They are a natural progression from the steam shovels and often mistakenly called power shovels. All movement and functions of a hydraulic excavator are accomplished through the use of hydraulic fluid, with hydraulic cylinders and hydraulic motors. Due to the linear actuation of hydraulic cylinders, their mode of operation is fundamentally different from cable-operated excavators which use winches and steel ropes to accomplish the movements.

Modern hydraulic excavators come in a wide variety of sizes. The smaller ones are called mini or compact excavators. For example, Caterpillar's smallest mini-excavator weighs 2,060 pounds (930 kg) and has 13 hp; their largest model is the largest excavator available (developed and produced by the Orenstein & Koppel, Germany, until the takeover 2011 by Caterpillar, named »RH400«), the CAT 6090, which weighs in excess of 2,160,510 pounds (979,990 kg), has 4500 hp, and a bucket as large as 52.0 m³.

Hydraulic excavators usually couple engine power to (commonly) three hydraulic pumps rather than to mechanical drivetrains. The two main pumps supply oil at high pressure (up to 5000 psi, 345 bar) for the arms, swing motor, track motors and accessories while the third is a lower pressure (~700 psi, 48 bar) pump for pilot control of the spool valves; this third circuit allows for reduced physical effort when operating the controls. Generally, the 3 pumps used in excavators consist of 2 variable displacement piston pumps and a gear pump. The arrangement of the pumps in the excavator unit changes with different manufacturers using different formats.

The three main sections of an excavator are the undercarriage, the house and the arm (also boom is used). The undercarriage includes tracks, track frame, and final drives, which have a hydraulic motor and gearing providing the drive to the individual tracks. Undercarriage can also have blade similar to that of a bulldozer. The house includes the operator cab, counterweight, engine, fuel and hydraulic oil tanks. The house attaches to the undercarriage by way of a center pin. High-pressure oil is supplied to the tracks' hydraulic motors through a hydraulic swivel at the axis of the pin, allowing the machine to slew 360° unhindered and thus provides the left-and-right movement. The arm provides the up-and-down and closer-and-further (or digging movement) movements. Arm consist typically of boom, stick and bucket with three joints between them and the house.

On the end of the stick is usually a bucket. A wide, large capacity (mud) bucket with a straight cutting edge is used for cleanup and levelling or where the material to be dug is soft, and teeth are not required. A general purpose (GP) bucket is generally smaller, stronger, and has hardened side cutters and teeth used to break through hard ground and rocks. Buckets have numerous shapes and sizes for various applications. There are also many other attachments that are available to be attached to the excavator for boring, ripping, crushing, cutting, lifting, etc. Attachments can be attached with pins similar to other parts of the arm or with some variety of quick coupler. Excavators in Scandinavia often feature a tiltrotator which allows attachments rotate 360 degrees and tilt +/- 45 degrees, in order to increase the flexibility and precision of the excavator.

Before the 1990s, all excavators had a long or conventional counterweight that hung off the rear of the machine to provide more digging force and lifting capacity. This became a nuisance when working in confined areas. In 1993 Yanmar launched the world's first Zero Tail Swing excavator, which allows the counterweight to stay inside the width of the tracks as it slews, thus being safer and more user friendly when used in a confined space. This type of machine is now widely used throughout the world.