In this page you can download PNG image - Email PNG. 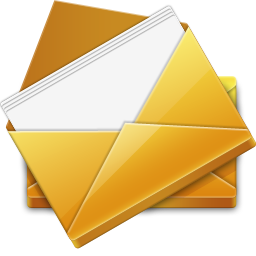 Electronic mail (email or e-mail) is a method of exchanging messages ("mail") between people using electronic devices. Email entered limited use in the 1960s, but users could only send to users of the same computer, and some early email systems required the author and the recipient to both be online simultaneously, similar to instant messaging. Ray Tomlinson is credited as the inventor of email; in 1971, he developed the first system able to send mail between users on different hosts across the ARPANET, using the @ sign to link the user name with a destination server. By the mid-1970s, this was the form recognized as email.

Email operates across computer networks, primarily the Internet. Today's email systems are based on a store-and-forward model. Email servers accept, forward, deliver, and store messages. Neither the users nor their computers are required to be online simultaneously; they need to connect, typically to a mail server or a webmail interface to send or receive messages or download it.

The history of modern Internet email services reaches back to the early ARPANET, with standards for encoding email messages published as early as 1973 (RFC 561). An email message sent in the early 1970s is similar to a basic email sent today.

Computer-based mail and messaging became possible with the advent of time-sharing computers in the early 1960s, and informal methods of using shared files to pass messages were soon expanded into the first mail systems. Most developers of early mainframes and minicomputers developed similar, but generally incompatible, mail applications. Over time, a complex web of gateways and routing systems linked many of them. Many US universities were part of the ARPANET (created in the late 1960s), which aimed at software portability between its systems. In 1971 the first ARPANET network email was sent, introducing the now-familiar address syntax with the '@' symbol designating the user's system address. The Simple Mail Transfer Protocol (SMTP) protocol was introduced in 1981.

For a time in the late 1980s and early 1990s, it seemed likely that either a proprietary commercial system or the X.400 email system, part of the Government Open Systems Interconnection Profile (GOSIP), would predominate. However, once the final restrictions on carrying commercial traffic over the Internet ended in 1995, a combination of factors made the current Internet suite of SMTP, POP3 and IMAP email protocols the standard.