In this page you can download PNG image - Cuckoo PNG. 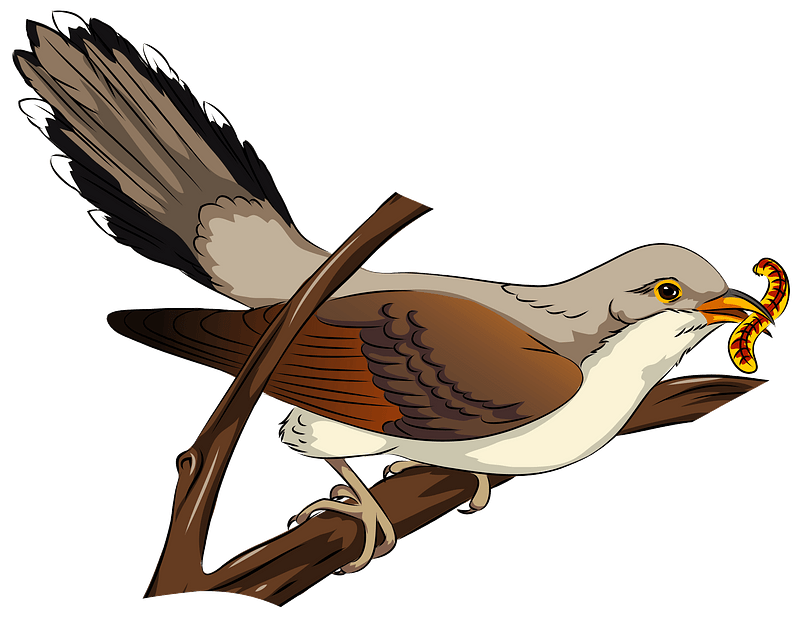 This image has format transparent PNG with resolution 800x617.
You can download this image in best resolution from this page and use it for design and web design.

Cuckoos are birds in the Cuculidae /kjuːˈkjuːlɪdiː/ family, the sole taxon in the order Cuculiformes /kjuːˈkjuːlɪfɔːrmiːz/. The cuckoo family includes the common or European cuckoo, roadrunners, koels, malkohas, couas, coucals and anis. The coucals and anis are sometimes separated as distinct families, the Centropodidae and Crotophagidae respectively. The cuckoo order Cuculiformes is one of three that make up the Otidimorphae, the other two being the turacos and the bustards. The family Cuculidae contains 150 species which are divided into 33 genera.

The cuckoos are generally medium-sized slender birds. Most species live in trees, though a sizeable minority are ground-dwelling. The family has a cosmopolitan distribution; the majority of species are tropical. Some species are migratory. The cuckoos feed on insects, insect larvae and a variety of other animals, as well as fruit. Some species are brood parasites, laying their eggs in the nests of other species and giving rise to the metaphor cuckoo's egg, but the majority of species raise their own young.

Cuckoos have played a role in human culture for thousands of years, appearing in Greek mythology as sacred to the goddess Hera. In Europe, the cuckoo is associated with spring, and with cuckoldry, for example in Shakespeare's Love's Labour's Lost. In India, cuckoos are sacred to Kamadeva, the god of desire and longing, whereas in Japan, the cuckoo symbolises unrequited love.

Cuckoos are medium-sized birds that range in size from the little bronze cuckoo, at 17 g and 15 cm (6 in), to moderately large birds, ranging from 60–80 cm (24–31 in) in length, such as the giant coua of Madagascar, the coral-billed ground-cuckoo of Indochina, the channel-billed cuckoo and various large Indo-Pacific coucals such as the goliath coucal of Halmahera, Timor coucal, buff-headed coucal, ivory-billed coucal, violaceous coucal, and larger forms of the pheasant coucal. The channel-billed cuckoo, at 630 g (1 lb 6 oz) and 63 cm (25 in) is the largest parasitic cuckoo. There is generally little sexual dimorphism in size, but where it exists, it can be either the male or the female that is larger. One of the most important distinguishing features of the family are the feet, which are zygodactyl, meaning that the two inner toes point forward and the two outer backward. There are two basic body forms, arboreal species (like the common cuckoo) which are slender and have short tarsi, and terrestrial species (like the roadrunners) which are more heavy set and have long tarsi. Almost all species have long tails which are used for steering in terrestrial species and as a rudder during flight in the arboreal species. The wing shape also varies with lifestyle, with the more migratory species like the black-billed cuckoo possessing long narrow wings capable of strong direct flight, and the more terrestrial and sedentary cuckoos like the coucals and malkohas having shorter rounded wings and a more laboured gliding flight.

The subfamily Cuculinae are the brood-parasitic cuckoos of the Old World. They tend to conform to the classic shape, with (usually) long tails, short legs, long narrow wings and an arboreal lifestyle. The largest species, the channel-billed cuckoo, also has the most outsized bill in the family, resembling that of a hornbill. The subfamily Phaenicophaeinae are the non-parasitic cuckoos of the Old World, and include the couas, malkohas, and ground-cuckoos. They are more terrestrial cuckoos, with strong and often long legs and short rounded wings. The subfamily typically has brighter plumage and brightly coloured bare skin around the eye. The coucals are another terrestrial Old World subfamily of long tailed long legged and short winged cuckoos. They are large heavyset birds with the largest, the greater black coucal, being around the same size as the channel-billed cuckoo. The subfamily Coccyzinae are arboreal and long tailed as well, with a number of large insular forms. The New World ground cuckoos are similar to the Asian ground-cuckoos in being long legged and terrestrial, and includes the long billed roadrunner, which can reach speeds of 30 km/h when chasing prey. The final subfamily are the atypical anis, which include the small clumsy anis and the larger guira cuckoo. The anis have massive bills and smooth glossy feathers.

The feathers of the cuckoos are generally soft, and often become waterlogged in heavy rain. Cuckoos often sun themselves after rain, and the anis hold their wings open in the manner of a vulture or cormorant while drying. There is considerable variation in the plumage exhibited by the family. Some species, particularly the brood parasites have cryptic plumage, whereas others have bright and elaborate plumage. This is particularly true of the Chrysococcyx or glossy cuckoos, which have iridescent plumage. Some cuckoos have a resemblance to hawks in the genus Accipiter with barring on the underside; this apparently alarms potential hosts, allowing the female to access a host nest. The young of some brood parasites are coloured so as to resemble the young of the host. For example, the Asian koels breeding in India have black offspring to resemble their crow hosts, whereas in the Australian koels the chicks are brown like the honeyeater hosts. Sexual dimorphism in plumage is uncommon in the cuckoos, being most common in the parasitic Old World species. Cuckoos have 10 primary flight feathers and 9–13 secondary flight feathers. All species have 10 tail feathers apart from the anis which have 8.