In this page you can download PNG image - Elon Musk PNG. 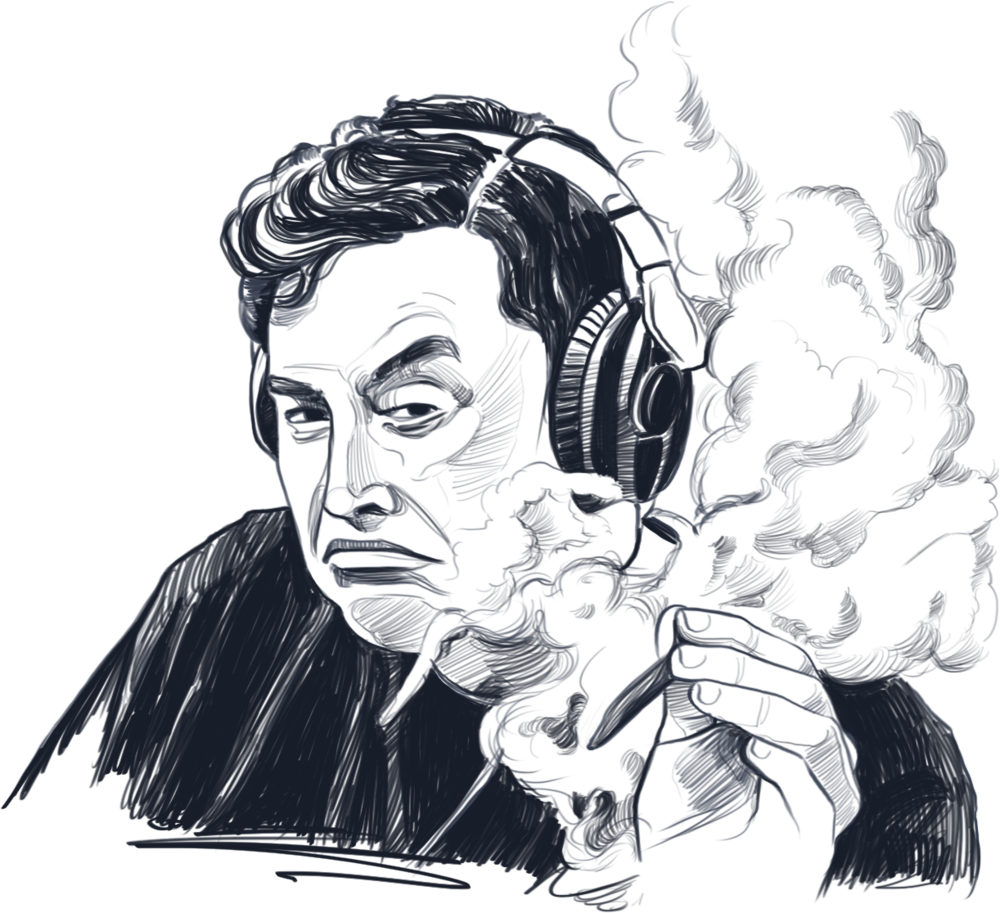 This image has format transparent PNG with resolution 1000x913.
You can download this image in best resolution from this page and use it for design and web design.

Elon Reeve Musk FRS (/ˈiːlɒn/ EE-lon; born June 28, 1971) is a business magnate and investor. He is the founder, CEO and chief engineer of SpaceX; angel investor, CEO and product architect of Tesla, Inc.; founder of The Boring Company; co-founder of Neuralink and OpenAI; president of Musk Foundation; and owner of Twitter, Inc.. With an estimated net worth of around $210 billion as of October 27, 2022,[4] Musk is the wealthiest person in the world according to both the Bloomberg Billionaires Index and Forbes' real-time billionaires list.

Musk was born and grew up in Pretoria, South Africa. He attended the University of Pretoria before moving to Canada at age 17, acquiring citizenship through his Canadian-born mother. Two years later, he matriculated at Queen's University and transferred to the University of Pennsylvania, where he received bachelor's degrees in economics and physics. He moved to California in 1995 to attend Stanford University but decided to instead pursue a business career, co-founding the web software company Zip2 with his brother, Kimbal. The startup was acquired by Compaq for $307 million in 1999. The same year, Musk co-founded the online bank X.com, which merged with Confinity in 2000 to form PayPal. eBay bought PayPal in 2002 for $1.5 billion.

In 2002, Musk founded SpaceX, an aerospace manufacturer and space transport services company, and is its CEO and chief engineer. In 2004, he was an early investor in the electric vehicle manufacturer Tesla Motors, Inc. (now Tesla, Inc.). He became its chairman and product architect, eventually assuming the position of CEO in 2008. In 2006, he helped create SolarCity, a solar energy company that was later acquired by Tesla and became Tesla Energy. In 2015, he co-founded OpenAI, a nonprofit research company promoting friendly artificial intelligence. In 2016, he co-founded Neuralink, a neurotechnology company focused on developing brain–computer interfaces, and he founded The Boring Company, a tunnel construction company. In 2022, Musk purchased Twitter for $44 billion. He has proposed a hyperloop high-speed vactrain transportation system and is the president of the Musk Foundation, which donates to scientific research and education.

Musk has promoted contentious perspectives regarding politics and various technologies, especially on Twitter. He has also been criticized for making unscientific statements, such as spreading COVID-19 misinformation. In 2018, the U.S. Securities and Exchange Commission (SEC) sued Musk for tweeting that he had secured funding for a private takeover of Tesla, which the SEC characterized as false and misleading. He settled with the SEC but did not admit guilt, and he temporarily stepped down from his Tesla chairmanship. In 2019, he won a defamation case brought against him by a British caver who had advised the Tham Luang cave rescue.

Tesla, Inc.—originally Tesla Motors—was incorporated in 2003 by Martin Eberhard and Marc Tarpenning, who financed the company until the Series A round of funding. Both men played active roles in the company's early development prior to Musk's involvement. Musk led the Series A round of investment in February 2004; he invested $6.5 million, became the majority shareholder, and joined Tesla's board of directors as chairman.[106] Musk took an active role within the company and oversaw Roadster product design but was not deeply involved in day-to-day business operations.

Musk expressed interest in buying Twitter as early as 2017. In January 2022, Musk began purchasing Twitter shares, reaching a 5% stake in the company in March; by April, he owned a 9% stake, making him the largest shareholder. He did not file the necessary SEC paperwork within 10 days of his stake passing 5%, a violation of U.S. securities laws. When he did publicly disclose his investment in an SEC 13G filing on April 4, Twitter shares experienced the largest intraday surge since the company's 2013 IPO. The revelation that Musk had acquired a significant stake in Twitter followed Musk's March tweets in which he questioned Twitter's commitment to freedom of speech and floated creating a rival social media site, although the comments were made after he had acquired 7.5% of Twitter's stake.

On April 4, Musk agreed to a deal that would appoint him to Twitter's board of directors and prohibit him from acquiring more than 14.9% of the company. However, on April 13, Musk made a $43 billion offer to buy Twitter, launching a takeover bid to buy 100% of Twitter's stock at $54.20 per share. In response, Twitter's board adopted a shareholder rights plan to make it more expensive for any single investor to own more than 15% of the company without the board's approval. A week later, Musk secured funding worth $46.5 billion, which included $12.5 billion in loans against his Tesla stock and $21 billion in equity financing. Later that day, Musk successfully concluded his bid for approximately $44 billion.

Tesla's stock market value sank by more than $125 billion the next day in reaction to the deal, causing Musk to lose around $30 billion of his net worth. He subsequently tweeted criticism of Twitter executive Vijaya Gadde's policies to his 86 million followers, which led to some of them engaging in sexist and racist harassment against her. Exactly a month after announcing the takeover, Musk stated that the deal was "on hold" following a report that 5 % of Twitter's daily active users were spam accounts, causing Twitter shares to drop more than 10 percent. Although initially he clarified that he remained committed to the acquisition, he sent notification of his termination of the deal in July; Twitter's Board of Directors responded that they were committed to holding him to the transaction. On July 12, 2022, Twitter formally sued Musk in the Chancery Court of Delaware for breaching a legally binding agreement to purchase Twitter. In October 2022, Musk reversed again, offering to purchase Twitter at $54.20 per share. The acquisition was officially completed on October 27, and Musk immediately fired top Twitter executives including CEO Parag Agrawal.