In this page you can download PNG image - HIMARS PNG. 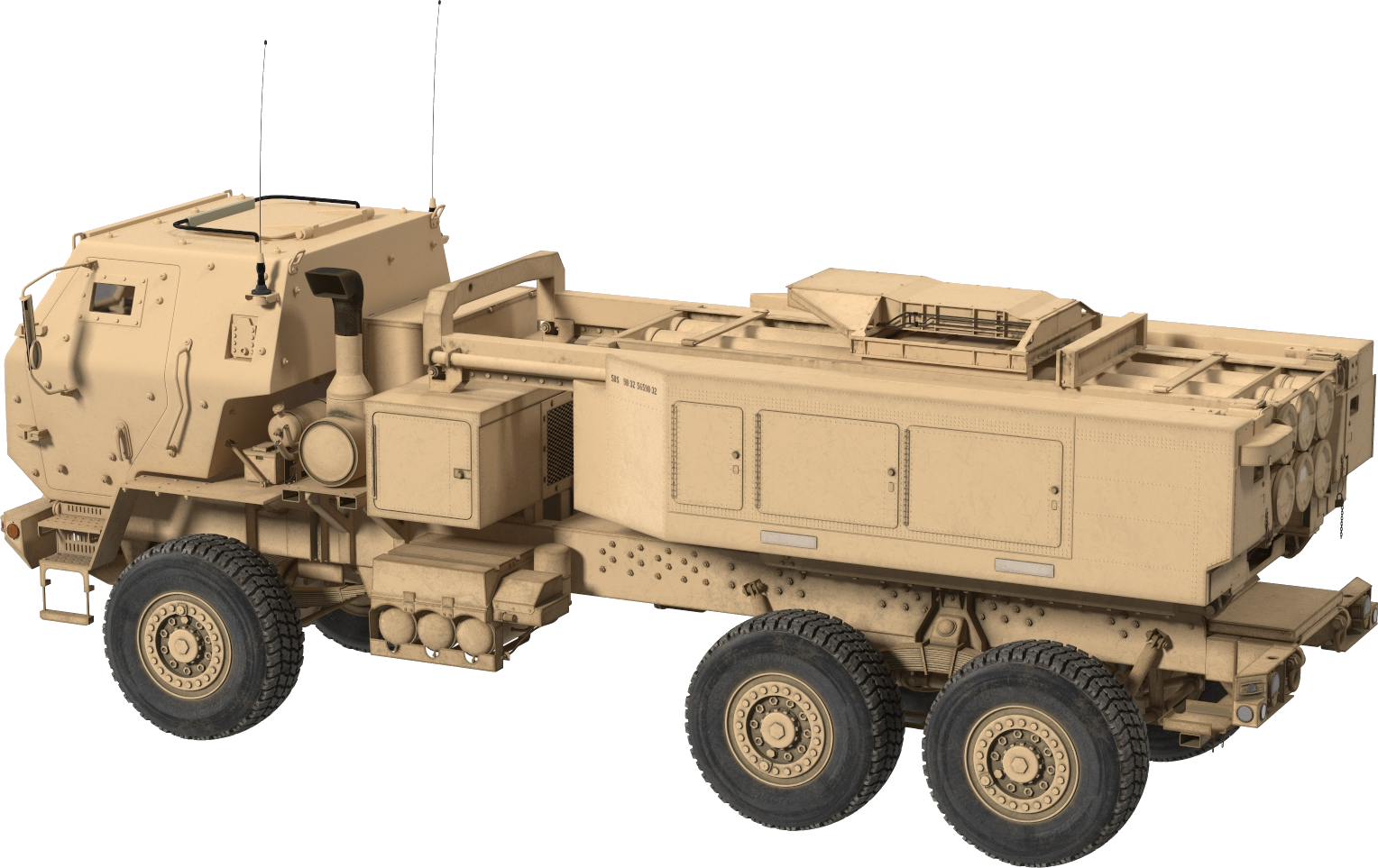 This image has format transparent PNG with resolution 1528x963.
You can download this image in best resolution from this page and use it for design and web design.

The HIMARS carries one pod with either six GMLRS rockets or one ATACMS missile. It is based on the United States Army's FMTV five-ton truck, and is capable of launching all rockets specified in the Multiple Launch Rocket System Family of Munitions (MFOM). HIMARS ammunition pods are interchangeable with the M270 MLRS; however, it is limited to a single pod as opposed to the standard two for the M270 and its variants.

The launcher can be transported by Lockheed C-130 Hercules aircraft. The FMTV truck that transports the HIMARS was initially produced by BAE Systems Mobility & Protection Systems (formerly Armor Holdings Aerospace and Defense Group Tactical Vehicle Systems Division), the original equipment manufacturer of the FMTV. It was produced by the Oshkosh Corporation from 2010 to 2017. Both chassis and launcher system are now produced by Lockheed Martin Missiles & Fire Control in Camden, Arkansas.

The HIMARS is similar in design to the M270 Multiple Launch Rocket System (MLRS), with the main exception being that it is a wheeled vehicle as opposed to tracked vehicle. The HIMARS carries one ordnance pod, which is identical to the pods used by the M270. The windows are made of sheets of sapphire laminated with glass and polycarbonate.

The HIMARS was also tested as a unified launch system for both artillery rockets and the SLAMRAAM surface-launched variant of the AMRAAM anti-aircraft missile.

In October 2017, a Marine Corps HIMARS fired a rocket while at sea against a land target for the first time from the deck of the amphibious transport dock USS Anchorage, demonstrating the system's ability to operate while on ships to deliver precision fire from a standoff range against shore defenses. The vehicle's targeting software was reworked so it can better fire while on a launch platform that is in motion.

On 31 May 2022, the US announced that it would be supplying HIMARS to Ukraine with M31 GMLRS unitary rockets. The next day, it was reported that four units would be sent. Under Secretary of Defense for Policy Colin Kahl said that the US would be able to send more systems as the fighting evolves. On 23 June, the first HIMARS arrived in Ukraine, according to Ukrainian Defense Minister Oleksii Reznikov. On 25 June 2022, Ukraine started deploying the system against Russian forces during the 2022 Russian invasion of Ukraine. According to Ukraine's Chief of General Staff, Valeriy Zaluzhnyi, "Artillerymen of the Armed Forces of Ukraine hit ... military targets of the enemy on our, Ukrainian, territory". The Ukrainian military claimed that this first strike, on a Russian base in Izyum, killed over 40 soldiers. The day before, a second batch of four was announced to be delivered in mid-July.

On 1 July, a US defense official told reporters that Ukraine had been using the system to destroy Russian command posts: "selecting targets and then accurately hitting them ... degrading Russian capability". On 18 July, Zaluzhnyi said: "An important factor contributing to our retention of defensive lines and positions is the timely arrival of M142 HIMARS, which deliver surgical strikes on enemy control posts, ammunition and fuel storage depots."

Another four HIMARS were announced for delivery on 8 July, the delivery spacing driven by the weeks-long process to train Ukrainian troops on how to use the platform. To avoid escalating the conflict, US restricted Ukraine from firing HIMARS rockets into Russian territory. For the same reason, the US has not provided Ukraine with the longer-range ATACMS missile, which could easily engage targets inside of Russia.

A fourth batch of four was announced on 20 July, bringing the total number of HIMARS committed to Ukraine to 16. Ukrainian Defense Minister Reznikov claimed that the country needed "at least 100" of the system and that by that point, eight systems had destroyed 30 command stations and ammunition storage facilities, decreasing the intensity of Russian shelling and slowing their advance. In that announcement, it was revealed that the number delivered had reached 12 launchers. That number had increased to 16 by 1 August.

On 30 August, 2022, The Washington Post reported on Ukrainian claims to have successfully used decoy HIMARS units made out of wood to draw at least 10 Russian 3M-54 Kalibr cruise missiles. One US diplomat was reported to state that Russian sources had claimed more HIMARS destroyed than the US had sent. A Pentagon official had earlier in the month asserted that no HIMARS had been destroyed at that time.

On 8 September, US General Mark Milley, chairman of the Joint Chiefs of Staff, told reporters: "We are seeing real and measurable gains from Ukraine in the use of these systems. For example, the Ukrainians have struck over 400 targets with the HIMARS and they've had devastating effect".

A further 18 HIMARS were announced on 28 September, however it was part of an aid package aimed at meeting Ukraine's mid- and long-term needs, so deliveries would begin in six months at the earliest. Ukraine had previously been provided with only M31 Unitary Warhead missiles, which are "not ideal against targets spread over large areas, as the deadly chunks are not designed to fly far." As of early October they have been granted the M30A1 which uses the Alternative Warhead that can cover up to "half a square mile of land in a single salvo" with nearly 200,000 tungsten ball bearings. The US also announced on 4 October that four more HIMARS launchers would be provided from US military stockpiles, bringing the total to 20 HIMARS in Ukrainian service.

In response to the effects of HIMARS, Russian Defense Minister Sergei Shoigu declared the HIMARS system as a high priority target for Russian troops. Ukrainian officials identified Russia's kamikaze drones as the biggest threat to the HIMARS system.