In this page you can download PNG image - ATV, quad bike PNG. 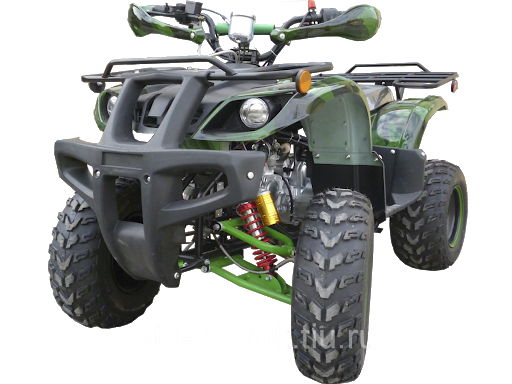 This image has format transparent PNG with resolution 512x384.
You can download this image in best resolution from this page and use it for design and web design.

An all-terrain vehicle (ATV), also known as a quad (cycle), three-wheeler, four-track, four-wheeler, or quadricycle, as defined by the American National Standards Institute (ANSI) is a vehicle that travels on low-pressure tires, with a seat that is straddled by the operator, along with handlebars for steering control. As the name implies, it is designed to handle a wider variety of terrain than most other vehicles. Although it is a street-legal vehicle in some countries, it is not street-legal within most states, territories, and provinces of Australia, the United States, or Canada.

The rider sits on and operates these vehicles like a motorcycle, but the extra wheels give more stability at slower speeds. Although most are equipped with three or four wheels, six-wheel models exist for specialized applications. Engine sizes of ATVs currently for sale in the United States (as of 2008 products) range from 49 to 1,000 cc (0.049 to 1.0 L; 3.0 to 61 cu in).

Safety courses and educational literature has reduced the amount and severity of accidents among ATC and ATV riders. As cornering is more challenging on an ATC than with a four-wheeled machine, properly leaning into the turn is required, to counterbalance the weight and keep the machine stable. Operators may roll over if caution isn't used at high speeds. The lighter front end and smaller footprint of ATC’s present both a flipping and steering hazard under acceleration and on inclines. Lateral rollovers may also occur when traversing steep inclines. However, in most terrain with the proper riding technique and safety gear, this issues can be mitigated. ATC’s require unique techniques to ride properly, and turning lean requires more exaggeration than ATV’s; Throttle steering is another technique commonly used on ATC’s in soft terrain and at high speeds, leaning to the inside of the turn and manipulating the throttle to break traction with the rear tires, resulting in the machines turning on axis while maintaining a forward direction.

Suzuki was a leader in the development of mass production four-wheeled ATVs. It sold the first model, the 1982 QuadRunner LT125, which was a recreational machine for beginners.

Adventure Vehicles of Monroe, Louisiana made the first quad ATV in 1980. They called it the Avenger 400. Prior to that, Adventure Vehicles made 3 wheel ATVs and a dump body utility 3 wheeler using Kohler 8 hp engines and Comet drive systems (Comet centrifugal belt driven clutch and a Comet forward, neutral, reverse transaxle with a rigid rear axle or rear differential option.) The Avenger 400 was a rigid suspension vehicle with a fiberglass body and welded tube construction. It was a rudimentary vehicle reminiscent of the Tote Gote of the 1960s. https://www.youtube.com/watch?v=-hc9EJcgig8

In 1985 Suzuki introduced to the industry the first high-performance four-wheel ATV, the Suzuki LT250R QuadRacer. This machine was in production for the 1985–1992 model years. During its production run it underwent three major engineering makeovers. However, the core features were retained. These were: a sophisticated long-travel suspension, a liquid-cooled two-stroke motor and a fully manual five-speed transmission for 1985–1986 models and a six-speed transmission for the 87–92 models. It was a machine exclusively designed for racing by highly skilled riders.

Honda responded a year later with the FourTrax TRX250R—a machine that has not been replicated until recently. It currently remains a trophy winner and competitor to big-bore ATVs. Kawasaki responded with its Tecate-4 250. The TRX250R was very similar to the ATC250R it eventually replaced, and is often considered one of the greatest sport ATVs ever built.

In 1987, Yamaha Motor Company introduced a different type of high-performance machine, the Banshee 350, which featured a twin-cylinder liquid-cooled two-stroke motor from the RD350LC street motorcycle. Heavier and more difficult to ride in the dirt than the 250s, the Banshee became a popular machine with sand dune riders thanks to its unique power delivery. The Banshee remains popular, but 2006 is the last year it was available in the U.S. (due to EPA emissions regulations); it remained available in Canada until 2008 and in Australia until 2012. The Warrior 350 was introduced in 1987 and went on for years as a light and fast ATV.

Shortly after the introduction of the Banshee in 1987, Suzuki released the LT500R QuadRacer. This unique quad was powered by a 500 cc liquid-cooled two-stroke engine with a five-speed transmission. This ATV earned the nickname "Quadzilla" with its remarkable amount of speed and size. While there are claims of 100+ mph (160 km/h) stock Quadzillas, it was officially recorded by 3&4 Wheel Action magazine as reaching a top speed of over 79 mph (127 km/h) in a high-speed shootout in its 1988 June issue, making it the fastest production four-wheeled ATV ever produced. Suzuki discontinued the production of the LT500R in 1990 after just four years.

At the same time, development of utility ATVs was rapidly escalating. The 1986 Honda FourTrax TRX350 4x4 ushered in the era of four-wheel drive ATVs. Other manufacturers quickly followed suit, and 4x4s have remained the most popular type of ATV ever since. These machines are popular with hunters, farmers, ranchers and workers at construction sites.

Models continue, today, to be divided into the sport and utility markets. Sport models are generally small, light, two-wheel drive vehicles that accelerate quickly, have a manual transmission and run at speeds up to approximately 80 mph (130 km/h). Utility models are generally bigger four-wheel drive vehicles with a maximum speed of up to approximately 70 mph (110 km/h). They have the ability to haul small loads on attached racks or small dump beds. They may also tow small trailers. Due to the different weights, each has advantages on different types of terrain. A popular model is Yamaha's Raptor 700, which features a nearly 700 cc four-stroke engine.

Six-wheel models often have a small dump bed, with an extra set of wheels at the back to increase the payload capacity. They can be either four-wheel drive (back wheels driving only), or six-wheel drive.

In 2011 LandFighter was founded, "the first Dutch/European ATV brand". The largest part of production takes site in Taiwan, to European standards; the ATVs are finally assembled in the Netherlands.

ATVS are mostly treated as a regular automobile in Germany, which means no special-vehicle or motorcycle license is needed. the regular driving license class B (multiple track motorized vehicles up to 3.5 Tons) is sufficient even for LoF registered vehicles. This results in Quads being allowed for people of 18 years or older that have a drivers license. It disallows people under the age of 18 to use, even if they have a 50cc or 125cc bike license, due to the fact they are treated as automobiles instead of motorcycles.

However, since 2013, the class AM was introduced, allowing 16 year olds to drive microcars that do not exceed a speed of 50km/h (such as the infamous Ellenator) a 16 year old owning the AM license is allowed to drive an ATV limited to 50cc and a top speed of 45 km/h