In this page you can download PNG image - Bison PNG. 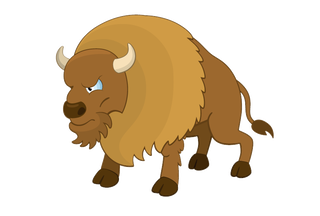 This image has format transparent PNG with resolution 320x216.
You can download this image in best resolution from this page and use it for design and web design.

Bison are large, even-toed ungulates in the genus Bison within the subfamily Bovinae.

Two extant and six extinct species are recognised. Of the six extinct species, five became extinct in the Quaternary extinction event. Bison palaeosinensis evolved in the Early Pleistocene in South Asia, and was the evolutionary ancestor of B. priscus (steppe bison), which was the ancestor of all other Bison species. From 2 million years ago to 6,000 BC, steppe bison ranged across the mammoth steppe, inhabiting Europe and northern Asia with B. schoetensacki (woodland bison), and North America with B. antiquus, B. latifrons, and B. occidentalis. The last species to go extinct, B. occidentalis, was succeeded at 3,000 BC by B. bison.

Of the two surviving species, the American bison, B. bison, found only in North America, is the more numerous. Although commonly known as a buffalo in the United States and Canada, it is only distantly related to the true buffalo. The North American species is composed of two subspecies, the Plains bison, B. b. bison, and the wood bison, B. b. athabascae, which is the namesake of Wood Buffalo National Park in Canada. A third subspecies, the eastern bison (B. b. pennsylvanicus) is no longer considered a valid taxon, being a junior synonym of B. b. bison.[3] References to "woods bison" or "wood bison" from the eastern United States confusingly refer to this subspecies, not B. b. athabascae, which was not found in the region. The European bison, B. bonasus, or wisent, is found in Europe and the Caucasus, reintroduced after being extinct in the wild.

While all bison species are classified in their own genus, they are sometimes bred with domestic cattle (genus Bos) and produce sometimes fertile offspring called beefalo or zubron.