In this page you can download PNG image - UGG boots PNG. 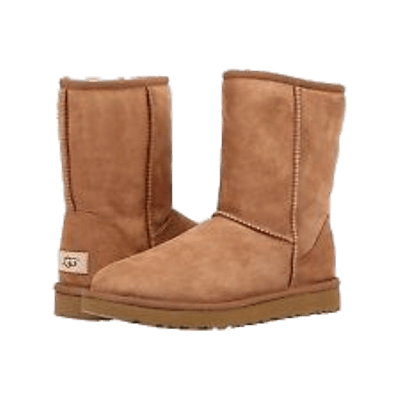 Ugg boots are a unisex style of sheepskin boot originating in Australia and New Zealand. The boots are typically made of twin-faced sheepskin with fleece on the inside, a tanned outer surface and a synthetic sole. The term, ugg boots, originated from Australia, initially for utilitarian footwear worn for warmth, and which were often worn by surfers during the 1960s. In the 1970s, the boots were introduced to the surf culture of the United Kingdom and the United States. Sheepskin boots became a fashion trend in the U.S. in the late 1990s and as a worldwide trend in the mid-2000s. In Australia, they are worn predominantly as slippers and often associated with "daggy" fashion sense and "bogan" culture.

Prior legal disputes between some manufacturers of sheepskin boots arose as to distinguish whether "ugg" is a protected trademark, or a generic term and thus ineligible for trademark protection. There are more than 70 registered trademarks that include the term "ugg" in various logos and designs in Australia and New Zealand, as the term is considered a generic reference to a type of shoe. Outside Australia and New Zealand, UGG is a brand manufactured by the California-based Deckers Outdoor Corporation, with most of its manufacturing based in China and with registered trademarks in over 130 countries worldwide including the US, UK, Canada, all European Union members, and China.