In this page you can download PNG image - Brain PNG. 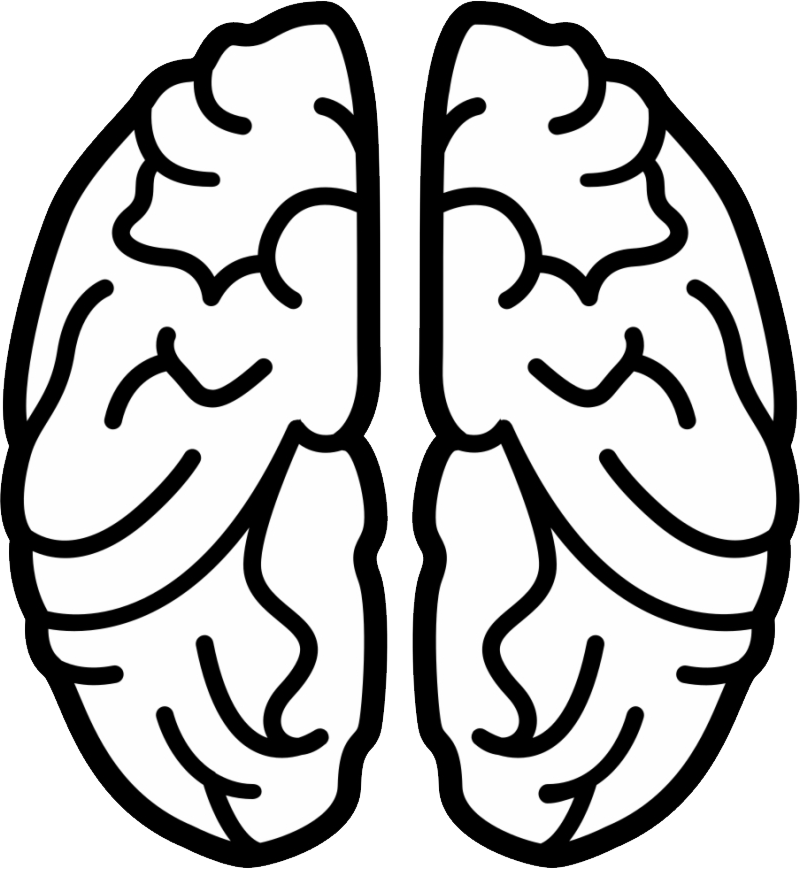 This image has format transparent PNG with resolution 800x869.
You can download this image in best resolution from this page and use it for design and web design.

A brain is an organ that serves as the center of the nervous system in all vertebrate and most invertebrate animals. It is located in the head, usually close to the sensory organs for senses such as vision. It is the most complex organ in a vertebrate's body. In a human, the cerebral cortex contains approximately 14–16 billion neurons, and the estimated number of neurons in the cerebellum is 55–70 billion. Each neuron is connected by synapses to several thousand other neurons. These neurons communicate with one another by means of long protoplasmic fibers called axons, which carry trains of signal pulses called action potentials to distant parts of the brain or body targeting specific recipient cells.

Physiologically, brains exert centralized control over a body's other organs. They act on the rest of the body both by generating patterns of muscle activity and by driving the secretion of chemicals called hormones. This centralized control allows rapid and coordinated responses to changes in the environment. Some basic types of responsiveness such as reflexes can be mediated by the spinal cord or peripheral ganglia, but sophisticated purposeful control of behavior based on complex sensory input requires the information integrating capabilities of a centralized brain.

The operations of individual brain cells are now understood in considerable detail but the way they cooperate in ensembles of millions is yet to be solved. Recent models in modern neuroscience treat the brain as a biological computer, very different in mechanism from an electronic computer, but similar in the sense that it acquires information from the surrounding world, stores it, and processes it in a variety of ways.

The shape and size of the brain varies greatly between species, and identifying common features is often difficult. Nevertheless, there are a number of principles of brain architecture that apply across a wide range of species. Some aspects of brain structure are common to almost the entire range of animal species; others distinguish "advanced" brains from more primitive ones, or distinguish vertebrates from invertebrates.

The simplest way to gain information about brain anatomy is by visual inspection, but many more sophisticated techniques have been developed. Brain tissue in its natural state is too soft to work with, but it can be hardened by immersion in alcohol or other fixatives, and then sliced apart for examination of the interior. Visually, the interior of the brain consists of areas of so-called grey matter, with a dark color, separated by areas of white matter, with a lighter color. Further information can be gained by staining slices of brain tissue with a variety of chemicals that bring out areas where specific types of molecules are present in high concentrations. It is also possible to examine the microstructure of brain tissue using a microscope, and to trace the pattern of connections from one brain area to another.

Information from the sense organs is collected in the brain. There it is used to determine what actions the organism is to take. The brain processes the raw data to extract information about the structure of the environment. Next it combines the processed information with information about the current needs of the animal and with memory of past circumstances. Finally, on the basis of the results, it generates motor response patterns. These signal-processing tasks require intricate interplay between a variety of functional subsystems.

The function of the brain is to provide coherent control over the actions of an animal. A centralized brain allows groups of muscles to be co-activated in complex patterns; it also allows stimuli impinging on one part of the body to evoke responses in other parts, and it can prevent different parts of the body from acting at cross-purposes to each other.