In this page you can download PNG image - Keep Calm PNG. 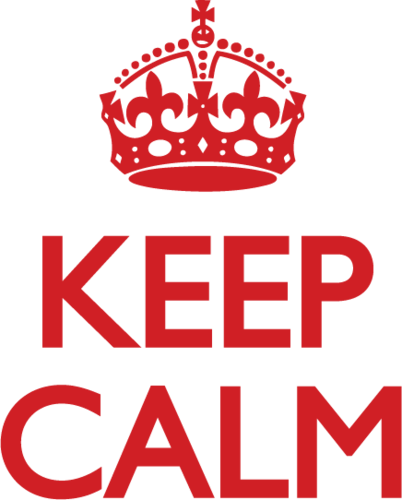 This image has format transparent PNG with resolution 402x500.
You can download this image in best resolution from this page and use it for design and web design.

Keep Calm and Carry On is a motivational poster produced by the British government in 1939 in preparation for World War II. The poster was intended to raise the morale of the British public, threatened with widely predicted mass air attacks on major cities. Although 2.45 million copies were printed, and although the Blitz did in fact take place, the poster was only rarely publicly displayed and was little known until a copy was rediscovered in 2000 at Barter Books, a bookshop in Alnwick. It has since been re-issued by a number of private companies, and has been used as the decorative theme for a range of products.

Evocative of the Victorian belief in British stoicism – the "stiff upper lip", self-discipline, fortitude, and remaining calm in adversity – the poster has become recognised around the world. It was thought that only two original copies survived until a collection of approximately 15 was brought in to the Antiques Roadshow in 2012 by the daughter of an ex-Royal Observer Corps member. A few further examples have come to light since.

The Keep Calm and Carry On poster was designed by the Ministry of Information during the period of 27 June to 6 July 1939. It was produced as part of a series of three "Home Publicity" posters (the others read "Your Courage, Your Cheerfulness, Your Resolution Will Bring Us Victory" and "Freedom Is in Peril / Defend It With All Your Might"). Each poster showed the slogan under a representation of a "Tudor Crown" (a symbol of the state). They were intended to be distributed to strengthen morale in the event of a wartime disaster, such as mass bombing of major cities using high explosives and poison gas, which was widely expected within hours of an outbreak of war.

A career civil servant named A. P. Waterfield came up with "Your Courage" as "a rallying war-cry that will bring out the best in everyone of us and put us in an offensive mood at once". Others involved in the planning of the early posters included: John Hilton, Professor of Industrial Relations at Cambridge University, responsible overall as Director of Home Publicity; William Surrey Dane, managing director at Odhams Press; Gervas Huxley, former head of publicity for the Empire Marketing Board; William Codling, controller of HMSO; Harold Nicolson, MP; W. G. V. Vaughan, who became Director of the General Production Division (GPD); H. V. Rhodes, who later wrote an occasional paper on setting up a new government department; Ivison Macadam; "Mr Cruthley"; and "Mr Francis". Ernest Wallcousins was the artist tasked with creating the poster designs.

Detailed planning for the posters had started in April 1939 and the eventual designs were prepared after meetings between officials from the Ministry of Information and HM Treasury on 26 June 1939 and between officials from the Ministry of Information and HMSO on 27 June 1939. Roughs of the poster were completed on 6 July 1939, and the final designs were agreed by the Home Secretary Samuel Hoare, 1st Viscount Templewood on 4 August 1939. Printing began on 23 August 1939, the day that Nazi Germany and the USSR signed the Molotov–Ribbentrop Pact, and the posters were ready to be placed up within 24 hours of the outbreak of war.

The posters were produced in 11 different sizes, ranging from 15 × 10 inches (38 × 25 cm) up to large 48-sheet versions. The background colour was either red or blue. The lettering was probably hand-drawn by Wallcousins: it is similar, but not identical, to humanist sans-serif typefaces such as Gill Sans and Johnston.

Almost 2,500,000 copies of Keep Calm and Carry On were printed between 23 August and 3 September 1939 but the poster was not sanctioned for immediate public display. It was instead decided that copies should remain in "cold storage" for use after serious air raids (with resources transferred to Your Courage and Freedom is in Peril). Copies of Keep Calm and Carry On were retained until April 1940, but stocks were then pulped as part of the wider Paper Salvage campaign. A very few copies do appear to have been displayed, but such instances were rare and unauthorised: an October 1940 edition of the Yorkshire Post reports the poster hung in a shop in Leeds; while a photograph discovered in 2016 shows it on the wall of a government laboratory in Bedfordshire.

The remainder of the Ministry of Information publicity campaign was cancelled in October 1939 following criticism of its cost and impact. Many people claimed not to have seen the posters; while those who did see them regarded them as patronising and divisive. Design historian Susannah Walker regards the campaign as "a resounding failure" and reflective of a misjudgement by upper-class civil servants of the mood of the people.

In 2000, Stuart Manley, co-owner with his wife Mary of Barter Books Ltd. in Alnwick, Northumberland, was sorting through a box of second-hand books bought at auction when he uncovered one of the original "Keep Calm and Carry On" posters. The couple framed it and hung it up by the cash register; it attracted so much interest that Manley began to produce and sell copies. In late 2005, Guardian journalist Susie Steiner featured the replica posters as a Christmas gift suggestion, raising their profile still further. Other companies followed the Manleys' example, and the design rapidly began to be used as the theme for a wide range of products. Mary Manley later commented, "I didn't want it trivialised; but of course now it's been trivialised beyond belief."

In early 2012, Barter Books debuted an informational short film, The Story of Keep Calm and Carry On, providing visual insight into the modernisation and commercialisation of the design and the phrase.

The poster has become an evocation of British stoicism: the "stiff upper lip", self-discipline, fortitude and remaining calm in adversity. Susannah Walker comments that it is now seen "not only as a distillation of a crucial moment in Britishness, but also as an inspiring message from the past to the present in a time of crisis". She goes on to point out, however, that such an interpretation overlooks the circumstances of its production, and the relative failure of the campaign of which it formed a part.