In this page you can download PNG image - Biathlon PNG. 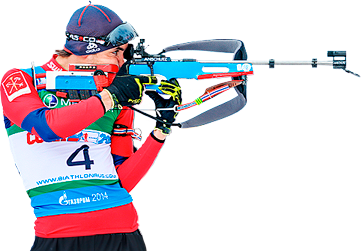 This image has format transparent PNG with resolution 361x251.
You can download this image in best resolution from this page and use it for design and web design.

The biathlon is a winter sport that combines cross-country skiing and rifle shooting. It is treated as a race where the contestant with the shortest total time wins. Depending on the competition, missed shots result in extra distance or time being added to the contestant's total.

According to Encyclopædia Britannica, the biathlon "is rooted in the skiing traditions of Scandinavia, where early inhabitants revered the Norse god Ullr as both the ski god and the hunting god". In modern times, the activity that developed into this sport was an exercise for Norwegian people that was an alternative training for the military. Norwegian skiing regiments organized military skiing contests in the 18th century, divided in four classes: shooting at mark while skiing at top speed, downhill race among trees, downhill race on big hills without falling, and a long race on flat ground while carrying rifle and military pack. In modern terminology these military contests included downhill, slalom, biathlon, and cross-country skiing. One of the world's first known ski clubs, the Trysil Rifle and Ski Club, was formed in Norway in 1861 to promote national defense at the local level. 20th century variants include Forsvarsrennet (the military contest) – a 17 km cross-country race with shooting, and the military cross-country race at 30 km including marksmanship. The modern biathlon is a civilian variant of the old military combined exercise. In Norway, the biathlon was until 1984 a branch of Det frivillige Skyttervesen, an organization set up by the government to promote civilian marksmanship in support of national defense. In Norwegian, the biathlon is called skiskyting (literally ski shooting). In Norway there are still separate contests in skifeltskyting, a cross-country race at 12 km with large-caliber rifle shooting at various targets with unknown range.

Called military patrol, the combination of skiing and shooting was contested at the Winter Olympic Games in 1924, and then demonstrated in 1928, 1936, and 1948, but did not regain Olympic recognition then because the small number of competing countries disagreed on the rules. During the mid-1950s, however, the biathlon was introduced into the Soviet and Swedish winter sport circuits and was widely enjoyed by the public. This newfound popularity aided the effort of having the biathlon gain entry into the Winter Olympics.

The first Biathlon World Championship was held in 1958 in Austria, and in 1960 the sport was finally included in the Olympic Games. At Albertville in 1992, women were first allowed in the Olympic biathlon.

The competitions from 1958 to 1965 used high-power centerfire cartridges, such as the .30-06 Springfield and the 7.62×51mm NATO, before the .22 Long Rifle rimfire cartridge was standardized in 1978. The ammunition was carried in a belt worn around the competitor's waist. The sole event was the men's 20 km individual, encompassing four separate ranges and firing distances of 100 m, 150 m, 200 m, and 250 m. The target distance was reduced to 150 m with the addition of the relay in 1966. The shooting range was further reduced to 50 m in 1978 with the mechanical self-indicating targets making their debut at the 1980 Winter Olympics in Lake Placid. For the 2018/2019 season, fully electronic targets were approved as an alternative to paper or mechanical steel targets for IBU events.

A biathlon competition consists of a race in which contestants ski through a cross-country trail system whose total distance is divided into either two or four shooting rounds, half in prone position, the other half standing. Depending on the shooting performance, extra distance or time is added to the contestant's total skiing distance/time. The contestant with the shortest total time wins.

For each shooting round, the biathlete must hit five targets or receive a penalty for each missed target, which varies according to the competition rules, as follows:

In order to keep track of the contestants' progress and relative standing throughout a race, split times (intermediate times) are taken at several points along the skiing track and upon finishing each shooting round. The large display screens commonly set up at biathlon arenas, as well as the information graphics shown as part of the TV picture, will typically list the split time of the fastest contestant at each intermediate point and the times and time differences to the closest runners-up.

The biathlete carries a small-bore rifle, which must weigh at least 3.5 kg, excluding ammunition and magazines. The rifles use .22 LR ammunition and are bolt action or Fortner (straight-pull bolt) action. Each rifle holds 4 magazines with 5 rounds each. Additional rounds can be kept on the stock of the rifle for a relay race.

The target range shooting distance is 50 m. There are five circular shooting targets to be hit in each shooting round. When shooting in the prone position, the target diameter is 45 mm; when shooting in the standing position, the target diameter is 115 mm. This translates to angular target sizes of about 1 and 2.5 mrad respectively. On all modern biathlon ranges, the targets are self-indicating, in that they flip from black to white when hit, giving the biathlete, as well as the spectators, instant visual feedback for each shot fired.

Ear protection is not required during biathlon shooting as the ammunition used is usually subsonic. An eyecup (blinder) is an optional feature of biathlon rifles.