In this page you can download PNG image - Dachshund PNG. 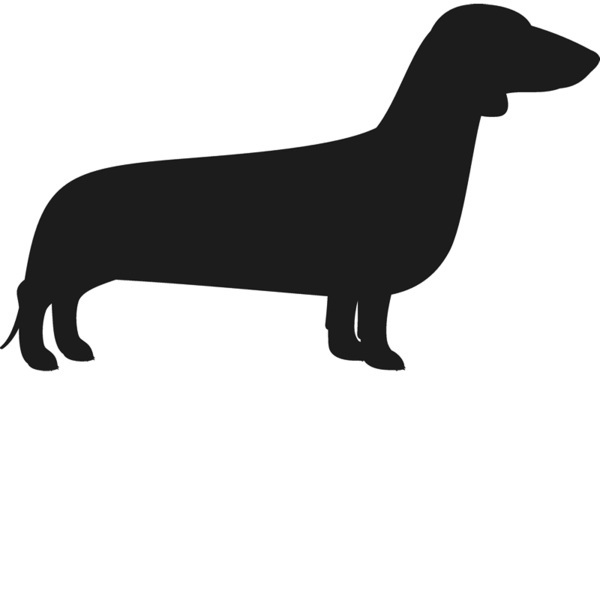 The standard size dachshund was developed to scent, chase, and flush out badgers and other burrow-dwelling animals, while the miniature dachshund was bred to hunt smaller prey such as rabbits. In the United States, they have also been used to track wounded deer and hunt prairie dogs.

Dachshunds also participate in conformation shows, field trials and many other events organized through pure-bred dog organizations such as the American Kennel Club (AKC). According to the AKC, the dachshund is ranked in 13th place in popularity amongst dog breeds in the United States.

While classified in the hound group or scent hound group in the United States and Great Britain, the breed has its own group in the countries which belong to the F?d?ration Cynologique Internationale (World Canine Federation). Many dachshunds, especially the wire-haired subtype, may exhibit behavior and appearance that are similar to that of the terrier group of dogs. An argument can be made for the scent (or hound) group classification because the breed was developed to use scent to trail and hunt animals, and probably descended from the Saint Hubert Hound like many modern scent hound breed such as bloodhounds and Basset Hounds; but with the persistent personality and love for digging that probably developed from the terrier, it can also be argued that they could belong in the terrier, or "earth dog", group.

A typical dachshund is long-bodied and muscular with short stubby legs. Its front paws are disproportionately large, being paddle-shaped and particularly suitable for digging. Its skin is loose enough not to tear while tunneling in tight burrows to chase prey. The dachshund has a deep chest which provides appropriate lung capacity for stamina when hunting. Its snout is long. According to the AKC standards for the breed, "scars from honorable wounds shall not be considered a fault" because the dachshund is a hunting dog.

There are three dachshund coat varieties: smooth coat (short hair), longhaired, and wirehaired. Longhaired dachshunds have a silky coat and short featherings on legs and ears. Wirehaired dachshunds are the least common coat variety in the United States (although it is the most common in Germany) and the most recent coat to appear in breeding standards. Dachshunds have a wide variety of colors and patterns, the most common one being red. Their base coloration can be single-colored (either red or cream), tan pointed (black and tan, chocolate and tan, blue and tan, or isabella and tan), and in wirehaired dogs, a color referred to as wildboar. Patterns such as dapple (merle), sable, brindle and piebald also can occur on any of the base colors. Dachshunds in the same litter may be born in different coat colors depending on the genetic makeup of the parents. The dominant color in the breed is red, followed by black and tan. Tan pointed dogs have tan (or cream) markings over the eyes, ears, paws, and tail. The reds range from coppers to deep rusts, with or without somewhat common black hairs peppered along the back, face and ear edges, lending much character and an almost burnished appearance; this is referred to among breeders and enthusiasts as an "overlay" or "sabling". Sabling should not be confused with a more unusual coat color referred to as sable. At a distance, a sable dachshund looks somewhat like a black and tan dog. Upon closer examination, however, one can observe that along the top of the dog's body, each hair is actually banded with red at the base near the skin transitioning to mostly black along the length of the strand. An additional striking coat marking is the brindle pattern. "Brindle" refers to dark stripes over a solid background—usually red. If a dachshund is brindled on a dark coat and has tan points, it will have brindling on the tan points only. Even one single, lone stripe of brindle is a brindle. If a dachshund has one single spot of dapple, it is a dapple.

The Dachshund Club of America (DCA) and the American Kennel Club (AKC) consider both the piebald pattern and the double dapple (double merle) pattern to be nonstandard. However, both types continue to be shown and sometimes even win in the conformation ring.

Dogs that are double-dappled have the merle pattern of a dapple, but with distinct white patches that occur when the dapple gene expresses itself twice in the same area of the coat. The DCA excluded the wording "double-dapple" from the standard in 2007 and now strictly use the wording "dapple" as the double dapple gene is commonly responsible for blindness and deafness.

Dachshunds come in three sizes: standard, miniature, and kaninchen (German for "rabbit"). Although the standard and miniature sizes are recognized almost universally, the rabbit size is not recognized by clubs in the United States and the United Kingdom. The rabbit size is recognized by the F?d?ration Cynologique Internationale (World Canine Federation) (FCI), which contain kennel clubs from 83 countries all over the world.An increasingly common size for family pets falls between the miniature and the standard size, frequently referred to as "tweenies," not an official classification.

A full-grown standard dachshund averages 16 lb (7.3 kg) to 32 lb (15 kg), while the miniature variety normally weighs less than 12 lb (5.4 kg). The kaninchen weighs 8 lb (3.6 kg) to 11 lb (5.0 kg). According to kennel club standards, the miniature (and kaninchen, where recognized) differs from the full-size only by size and weight, thus offspring from miniature parents must never weigh more than the miniature standard to be considered a miniature as well. While many kennel club size divisions use weight for classification, such as the American Kennel Club, other kennel club standards determine the difference between the miniature and standard by chest circumference; some kennel clubs, such as in Germany, even measure chest circumference in addition to height and weight.

H. L. Mencken said that "A dachshund is a half-dog high and a dog-and-a-half long," although they have been referred to as "two dogs long". This characteristic has led them to be quite a recognizable breed, and they are featured in many a joke and cartoon, particularly The Far Side by Gary Larson.

Dachshunds are playful, but as hunting dogs can be quite stubborn, and are known for their propensity for chasing small animals, birds, and tennis balls with great determination and ferocity. Many dachshunds are stubborn, making them a challenge to train.

Dachshunds can be aggressive to strangers and other dogs. Despite this, they are rated in the intelligence of dogs as an average working dog with a persistent ability to follow trained commands 50% of the time or more. They rank 49th in Stanley Coren's Intelligence of Dogs, being of average working and obedience intelligence. They can have a loud bark. Some bark quite a lot and may need training to stop, while others will not bark much at all. Dachshunds are known for their devotion and loyalty to their owners, though they can be standoffish towards strangers. If left alone too frequently, some dachshunds are prone to separation anxiety and may chew objects in the house to relieve stress.

Dachshunds are burrowers by nature and are likely to burrow in blankets and other items around the house, when bored or tired.

Dachshunds can be difficult to housebreak, and patience and consistency is often needed in this endeavor.

According to the American Kennel Club's breed standards, "the dachshund is clever, lively and courageous to the point of rashness, persevering in above and below ground work, with all the senses well-developed. Any display of shyness is a serious fault." Their temperament and body language give the impression that they do not know or care about their relatively small size. Like many small hunting dogs, they will challenge a larger dog. Indulged dachshunds may become snappy or extremely obstinate.

Many dachshunds do not like unfamiliar people, and many will growl or bark at them. Although the dachshund is generally an energetic dog, some are sedate. This dog's behavior is such that it is not the dog for everyone. A bored, untrained dachshund will become destructive. If raised improperly and not socialized at a young age, dachshunds can become aggressive or fearful. They require a caring, loving owner who understands their need for entertainment and exercise.

Dachshunds may not be the best pets for small children. Like any dog, dachshunds need a proper introduction at a young age. Well trained dachshunds and well-behaved children usually get along fine. Otherwise, they may be aggressive and bite an unfamiliar child, especially one that moves quickly around them or teases them. However, many dachshunds are very tolerant and loyal to children within their family, but these children should be mindful of the vulnerability of the breed's back.

A 2008 University of Pennsylvania study of 6,000 dog owners who were interviewed indicated that dogs of smaller breeds were more likely to be "genetically predisposed towards aggressive behaviour". Dachshunds were rated the most aggressive, with 20% having bitten strangers, as well as high rates of attacks on other dogs and their owners. The study noted that attacks by small dogs were unlikely to cause serious injuries and because of this were probably under-reported.