In this page you can download PNG image - Woodpecker PNG. 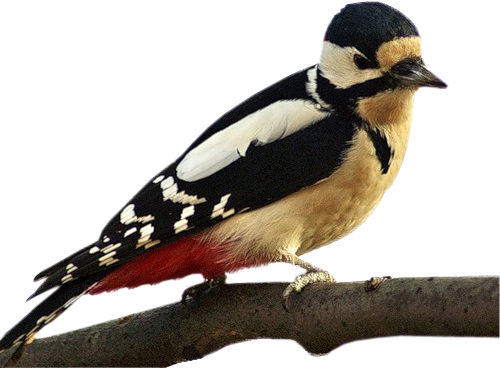 This image has format transparent PNG with resolution 500x368.
You can download this image in best resolution from this page and use it for design and web design.

Woodpeckers are part of the family Picidae, a group of near-passerine birds that also consist of piculets, wrynecks, and sapsuckers. Members of this family are found worldwide, except for Australia, New Guinea, New Zealand, Madagascar, and the extreme polar regions. Most species live in forests or woodland habitats, although a few species are known that live in treeless areas, such as rocky hillsides and deserts, and the Gila woodpecker specialises in exploiting cacti.

Members of this family are chiefly known for their characteristic behaviour. They mostly forage for insect prey on the trunks and branches of trees, and often communicate by drumming with their beak, producing a reverberatory sound that can be heard at some distance. Some species vary their diet with fruits, birds' eggs, small animals, and tree sap. They mostly nest and roost in holes that they excavate in tree trunks, and their abandoned holes are of importance to other cavity-nesting birds. They sometimes come into conflict with humans when they make holes in buildings or feed on fruit crops, but perform a useful service by their removal of insect pests on trees.

The Picidae are one of nine living families in the order Piciformes, the others being barbets (comprising three families), toucans, toucan-barbets, and honeyguides in the clade Pici, and the jacamars and puffbirds in the clade Galbuli. DNA sequencing has confirmed the sister relationships of these two groups. The family Picidae includes about 240 species arranged in 35 genera. Almost 20 species are threatened with extinction due to loss of habitat or habitat fragmentation, with one, the Bermuda flicker, being extinct and a further two probably being so.

Woodpeckers range from tiny piculets measuring no more than 7 cm (2.8 in) in length and weighing 7 g (0.25 oz) to large woodpeckers which can be more than 50 cm (20 in) in length. The largest surviving species is the great slaty woodpecker, which weighs 360–563 g (12.7–19.9 oz), but probably the extinct imperial woodpecker and ivory-billed woodpecker were both larger.

The plumage of woodpeckers varies from drab to conspicuous. The colours of many species are based on olive and brown and some are pied, suggesting a need for camouflage; others are boldly patterned in black, white and red, and many have a crest or tufted feathers on the crown. Woodpeckers tend to be sexually dimorphic, but differences between the sexes are generally small; exceptions to this are Williamson's sapsucker and the orange-backed woodpecker, which differ markedly. The plumage is moulted fully once a year apart from the wrynecks, which have an additional partial moult before breeding.

Woodpeckers, piculets and wrynecks all possess characteristic zygodactyl feet, consisting of four toes, the first (hallux) and the fourth facing backward and the second and third facing forward. This foot arrangement is good for grasping the limbs and trunks of trees. Members of this family can walk vertically up tree trunks, which is beneficial for activities such as foraging for food or nest excavation. In addition to their strong claws and feet, woodpeckers have short, strong legs. This is typical of birds that regularly forage on trunks. Exceptions are the black-backed woodpecker and the American and Eurasian three-toed woodpeckers, which have only three toes on each foot. The tails of all woodpeckers, except the piculets and wrynecks, are stiffened, and when the bird perches on a vertical surface, the tail and feet work together to support it.