In this page you can download PNG image - Hammock PNG. 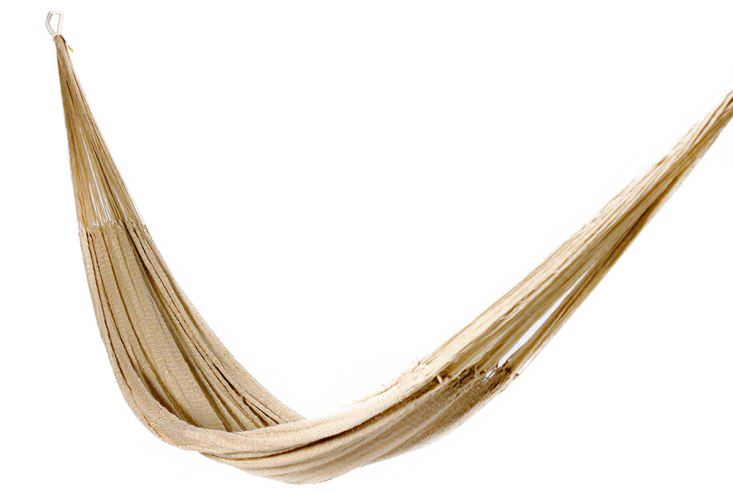 This image has format transparent PNG with resolution 733x493.
You can download this image in best resolution from this page and use it for design and web design.

A hammock (from Spanish hamaca, borrowed from Taino and Arawak hamaka) is a sling made of fabric, rope, or netting, suspended between two or more points, used for swinging, sleeping, or resting. It normally consists of one or more cloth panels, or a woven network of twine or thin rope stretched with ropes between two firm anchor points such as trees or posts. Hammocks were developed by native inhabitants of Central and South America for sleeping. Later, they were used aboard ships by sailors to enable comfort and maximize available space, and by explorers or soldiers travelling in wooded regions. Eventually, in the 1920s, parents throughout North America used fabric hammocks to contain babies just learning to crawl. Today they are popular around the world for relaxation; they are also used as a lightweight bed on camping trips. The hammock is often seen as a symbol of summer, leisure, relaxation and simple, easy living.

Spanish colonists noted the use of the hammock by Native Americans, particularly in the West Indies, at the time of the Spanish conquest.

Columbus, in the narrative of his first voyage, says: “A great many Indians in canoes came to the ship to-day for the purpose of bartering their cotton, and hamacas, or nets, in which they sleep.”

The word comes from a Ta?no culture Arawakan word (Haiti) meaning "stretch of cloth" from the Arawak root -maka.

Early hammocks were woven out of tree bark, and later this material was replaced by sisal fibers because it was more abundant. One of the reasons that hammocks became popular in Central and South America was their ability to provide safety from disease transmission, insect stings, or animal bites. By suspending their beds above ground, inhabitants were better protected from snakes, biting ants, and other harmful creatures.

The origin of the hammock in the Americas is often obscured in English-language sources from the late 18th century onward. Samuel Johnson claimed that the word hammock was of Saxon origin. This etymology was soon debunked, and later 19th-century sources attributed the invention to the Athenian politician Alcibiades. This was inferred from Plutarch, who wrote that Alcibiades had his galley bed hung from ropes, but did not specifically describe it as a net or sling. A few European sources mention the historical use of cloth slings as carriage seats, but not as regular beds.