In this page you can download PNG image - Lemur PNG. 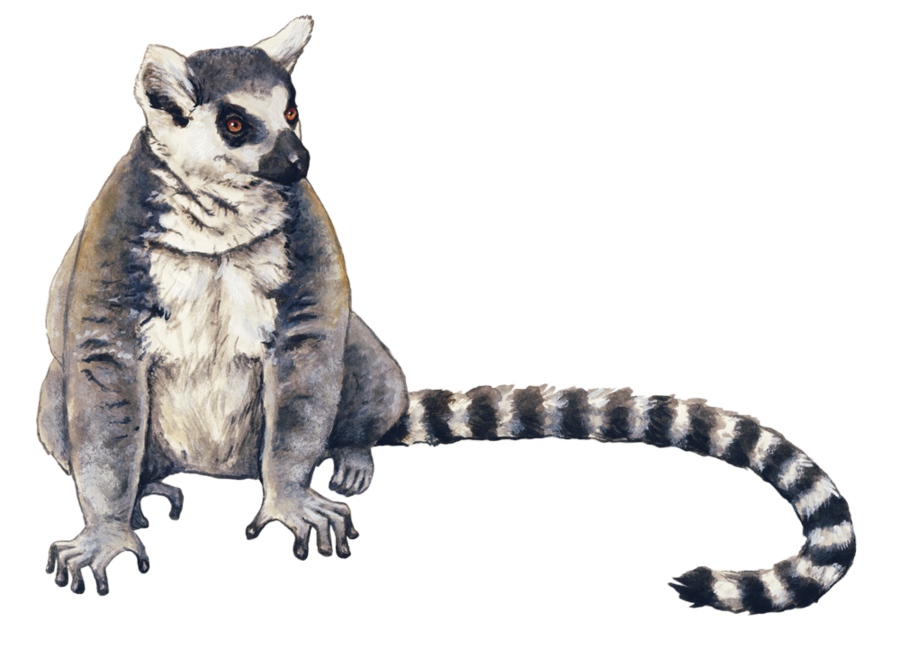 This image has format transparent PNG with resolution 900x658.
You can download this image in best resolution from this page and use it for design and web design.

Lemurs are a clade of strepsirrhine primates endemic to the island of Madagascar. The word lemur derives from the word lemures (ghosts or spirits) from Roman mythology and was first used to describe a slender loris due to its nocturnal habits and slow pace, but was later applied to the primates on Madagascar. As with other strepsirrhine primates, such as lorises, pottos, and galagos (bush babies), lemurs share resemblance with basal primates. In this regard, lemurs are often confused with ancestral primates, when in actuality, lemurs did not give rise to monkeys and apes, but evolved independently.

Due to Madagascar's highly seasonal climate, lemur evolution has produced a level of species diversity rivaling that of any other primate group. Until shortly after humans arrived on the island around 2,000 years ago, there were lemurs as large as a male gorilla. Today, there are nearly 100 species of lemurs, and most of those species have been discovered or promoted to full species status since the 1990s; however, lemur taxonomic classification is controversial and depends on which species concept is used. Even the higher-level taxonomy is disputed, with some experts preferring to place most lemurs within the infraorder Lemuriformes, while others prefer Lemuriformes to contain all living strepsirrhines, placing all lemurs in the superfamily Lemuroidea and all lorises and galagos in the superfamily Lorisoidea.

Ranging in weight from the 30-gram (1.1 oz) mouse lemur to the 9-kilogram (20 lb) indri, lemurs share many common, basal primate traits, such as divergent digits on their hands and feet and nails instead of claws (in most species). However, their brain-to-body size ratio is smaller than that of anthropoid primates, and among many other traits they share with other strepsirrhine primates, they have a "wet nose" (rhinarium). Lemurs are generally the most social of the strepsirrhine primates and communicate more with scents and vocalizations than with visual signals. Many lemur adaptations are in response to Madagascar's highly seasonal environment. Lemurs have relatively low basal metabolic rates and may exhibit seasonal breeding, dormancy (such as hibernation or torpor), or female social dominance. Most eat a wide variety of fruits and leaves, while some are specialists. Although many share similar diets, different species of lemur share the same forests by differentiating niches.

Lemur research during the 18th and 19th centuries focused on taxonomy and specimen collection. Although field observations trickled in from early explorers, modern studies of lemur ecology and behavior did not begin in earnest until the 1950s and 1960s. Initially hindered by political instability and turmoil on Madagascar during the mid-1970s, field studies resumed in the 1980s and have greatly increased the understanding of these primates. Research facilities like the Duke Lemur Center have provided research opportunities under more controlled settings. Lemurs are important for research because their mix of ancestral characteristics and traits shared with anthropoid primates can yield insights on primate and human evolution. However, many lemur species are threatened with extinction due to habitat loss and hunting. Although local traditions generally help protect lemurs and their forests, illegal logging, widespread poverty, and political instability hinder and undermine conservation efforts. Because of these threats and their declining numbers, the International Union for Conservation of Nature (IUCN) considers lemurs to be the world's most endangered mammals, noting that as of 2013 up to 90% of all lemur species face extinction within the next 20 to 25 years.