In this page you can download PNG image - Cowboy hat PNG. 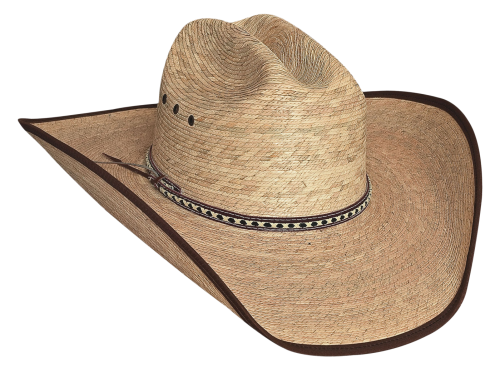 This image has format transparent PNG with resolution 500x373.
You can download this image in best resolution from this page and use it for design and web design.

The cowboy hat is a high-crowned, wide-brimmed hat best known as the defining piece of attire for the North American cowboy. Influenced by 19th century Mexican culture, today it is worn by many people, and is particularly associated with ranch workers in the western and southern United States, western Canada and northern Mexico, with country-western singers and ranchero singers in Mexico, and for participants in the North American rodeo circuit. It is recognized around the world as part of Old West lore. The shape of a cowboy hat's crown and brim are often modified by the wearer for fashion and to protect against weather.

It is an item of apparel that can be worn in any corner of the world, and receive immediate recognition as part of North American cowboy culture.

The first western model was the open-crowned "Boss of the Plains", and after that came the front-creased Carlsbad, destined to become “the” cowboy style. The high-crowned, wide-brimmed, soft-felt western hats that followed are intimately associated with the cowboy image.

Modern cowboy hats are made of fur-based felt, straw or, less often, leather. They are sold with a tall, rounded crown and a wide flat brim. They have a simple sweat band on the inside to stabilize the fit of the head, and usually a small decorative hat band on the outside of the crown. Hats are customized by creasing the crown and rolling the brim. Often a more decorative hat band is added. In some places, "stampede strings" or "wind strings" are also attached. Hats can be manufactured in virtually any color, but are most often seen in shades of beige, brown and black. Beginning in the 1940s, pastel colors were introduced, seen often on hats worn by movie cowboys and rodeo riders. "Today's cowboy hat has remained basically unchanged in construction and design since the first one was created in 1865 by J.B. Stetson."