In this page you can download PNG image - Swimming PNG. 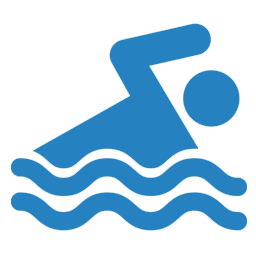 Swimming is the self-propulsion of a person through fresh or salt water, usually for recreation, sport, exercise, or survival. Locomotion is achieved through coordinated movement of the limbs, the body, or both. Humans can hold their breath underwater and undertake rudimentary locomotive swimming within weeks of birth, as an evolutionary response.

Swimming is consistently among top public recreational activities, and in some countries, swimming lessons are a compulsory part of the educational curriculum. As a formalized sport, swimming features in a range of local, national, and international competitions, including every modern Summer Olympics.

Swimming relies on the natural/non natural buoyancy of the human body. On average, the body has a relative density of 0.98 compared to water, which causes the body to float. However, buoyancy varies on the basis of both body composition and the salinity of the water. Higher levels of body fat and saltier water both lower the relative density of the body and increase its buoyancy.

Since the human body is only slightly less dense than water, water supports the weight of the body during swimming. As a result, swimming is “low-impact” compared to land activities such as running. The density and viscosity of water also create resistance for objects moving through the water. Swimming strokes use this resistance to create propulsion, but this same resistance also generates drag on the body.

Hydrodynamics is important to stroke technique for swimming faster, and swimmers who want to swim faster or exhaust less try to reduce the drag of the body's motion through the water. To be more hydrodynamic, swimmers can either increase the power of their strokes or reduce water resistance, though power must increase by a factor of three to achieve the same effect as reducing resistance. Efficient swimming by reducing water resistance involves a horizontal water position, rolling the body to reduce the breadth of the body in the water, and extending the arms as far as possible to reduce wave resistance.

Just before plunging into the pool, swimmers may perform exercises such as squatting. Squatting helps in enhancing a swimmer’s start by warming up the thigh muscles.