In this page you can download PNG image - Nettle PNG. 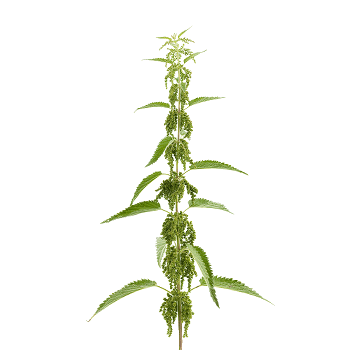 This image has format transparent PNG with resolution 350x350.
You can download this image in best resolution from this page and use it for design and web design.

Common nettle, stinging nettle (although not all plants of this species sting) or nettle leaf, is a herbaceous perennial flowering plant in the family Urticaceae. It is native to Europe, Asia, northern Africa, and North America, and introduced elsewhere. The species is divided into six subspecies, five of which have many hollow stinging hairs called trichomes on the leaves and stems, which act like hypodermic needles, injecting histamine and other chemicals that produce a stinging sensation upon contact ("contact urticaria"). The plant has a long history of use as a source for traditional medicine, food, and tea.

Nettle is a dioecious, herbaceous, perennial plant, 1 to 2 m (3 to 7 ft) tall in the summer and dying down to the ground in winter. It has widely spreading rhizomes and stolons, which are bright yellow, as are the roots. The soft, green leaves are 3 to 15 cm (1 to 6 in) long and are borne oppositely on an erect, wiry, green stem. The leaves have a strongly serrated margin, a cordate base, and an acuminate tip with a terminal leaf tooth longer than adjacent laterals. It bears small, greenish or brownish, numerous flowers in dense axillary inflorescences. The leaves and stems are very hairy with non-stinging hairs, and in most subspecies, also bear many stinging hairs (trichomes or spicules), whose tips come off when touched, transforming the hair into a needle that can inject several chemicals causing a painful sting or paresthesia, giving the species its common names: stinging nettle, burn nettle, burn weed, or burn hazel.