In this page you can download PNG image - Bulletproof vest PNG. 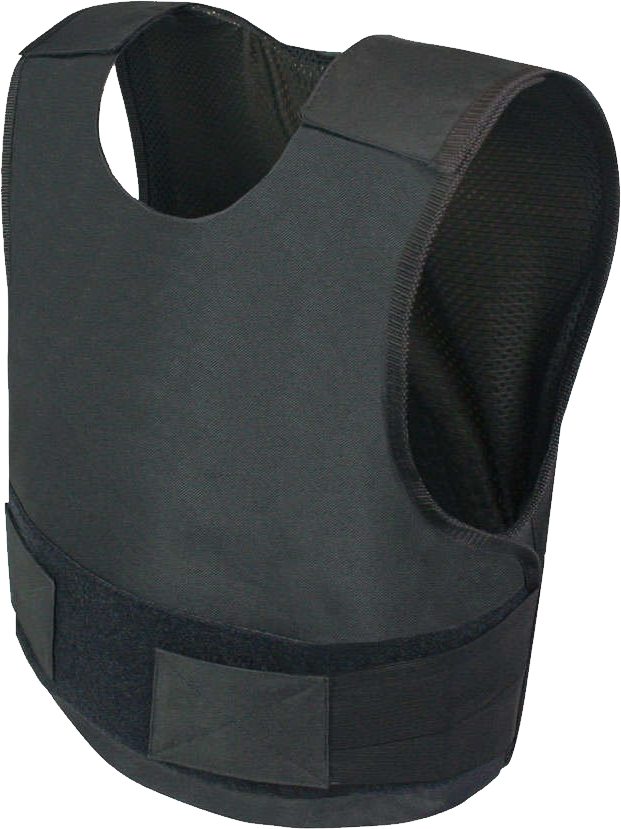 This image has format transparent PNG with resolution 621x829.
You can download this image in best resolution from this page and use it for design and web design.

A ballistic vest or bullet-resistant vest, often called a bulletproof vest, is an item of personal armor that helps absorb the impact and reduce or stop penetration to the body from firearm-fired projectiles- and shrapnel from explosions, and is worn on the torso. Soft vests are made of many layers of woven or laminated fibers and can protect the wearer from small-caliber handgun and shotgun projectiles, and small fragments from explosives such as hand grenades.

These vests often have a ballistic plate inserted into the vest. Metal or ceramic plates can be used with a soft vest, providing additional protection against rifle rounds, and metallic components or tightly woven fiber layers can give soft armour resistance to stab and slash attacks from knives and similar close-quarter weapons. Soft vests are commonly worn by police forces, private citizens who are at risk of being shot (e.g., national leaders), security guards, and bodyguards, whereas hard-plate reinforced vests are mainly worn by combat soldiers, police tactical units, and hostage rescue teams.

Body armor may combine a ballistic vest with other items of protective clothing, such as a combat helmet. Vests intended for police and military use may also include ballistic shoulder and side protection armor components, and bomb disposal officers wear heavy armor and helmets with face visors and spine protection.

Ballistic vests use layers of very strong fibers to "catch" and deform a bullet, mushrooming it into a dish shape, and spreading its force over a larger portion of the vest fiber. The vest absorbs the energy from the deforming bullet, bringing it to a stop before it can completely penetrate the textile matrix. Some layers may be penetrated but as the bullet deforms, the energy is absorbed by a larger and larger fiber area.

While a vest can prevent bullet penetration, the vest and wearer still absorb the bullet's impulse. Even without penetration, heavy bullets deal enough force to cause blunt force trauma under the impact point. Vest specifications will typically include both penetration resistance requirements and limits on the amount of impact force that is delivered to the body.

On the other side, some bullets can penetrate the vest, but still deal low damage to its wearer because of speed loss and/or their small mass/form.

Vests designed for bullets offer little protection against blows from sharp implements, such as knives, arrows or ice picks, or from bullets manufactured of non-deformable materials, e.g., those containing a steel core instead of lead. This is because the impact force of these objects stays concentrated in a relatively small area, allowing them to puncture the fiber layers of most bullet-resistant fabrics.[citation needed] By contrast, stab vests provide better protection against sharp implements, but are generally less effective against bullets.

Textile vests may be augmented with metal (steel or titanium), ceramic or polyethylene plates that provide extra protection to vital areas. These hard armor plates have proven effective against all handgun bullets and a range of rifles. These upgraded ballistic vests have become standard in military use, as soft body armor vests are ineffective against military rifle rounds. Prison guards and police often wear vests which are designed specifically against bladed weapons and sharp objects. These vests may incorporate coated and laminated para-aramid textiles or metallic components.