In this page you can download PNG image - Hyena PNG. 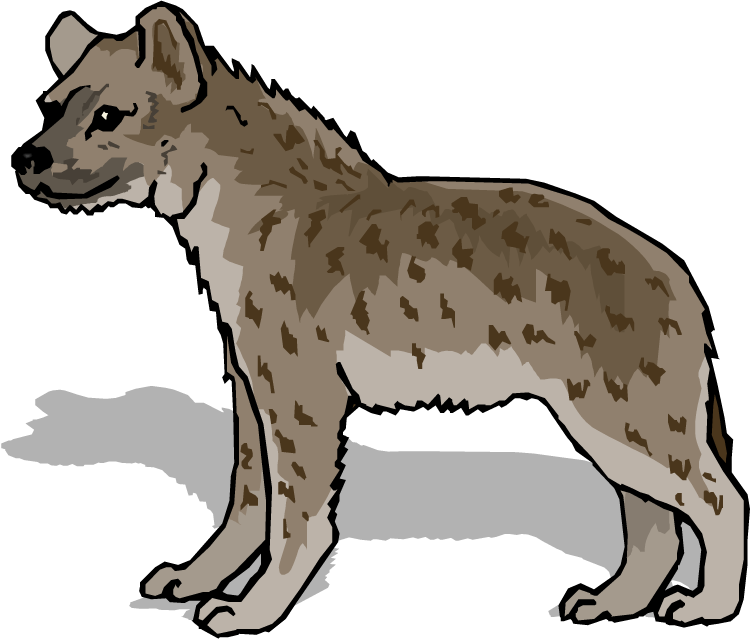 This image has format transparent PNG with resolution 750x640.
You can download this image in best resolution from this page and use it for design and web design.

Hyenas or hyaenas are any feliform carnivoran mammals of the family Hyaenidae. With only four extant species, it is the fifth-smallest biological family in the Carnivora, and one of the smallest in the class Mammalia. Despite their low diversity, hyenas are unique and vital components of most African ecosystems.

Although phylogenetically they are closer to felines and viverrids, hyenas are behaviourally and morphologically similar to canines in several aspects; both hyenas and canines are non-arboreal, cursorial hunters that catch prey with their teeth rather than claws. Both eat food quickly and may store it, and their calloused feet with large, blunt, nonretractable nails are adapted for running and making sharp turns. However, the hyenas' grooming, scent marking, defecating habits, mating, and parental behaviour are consistent with the behaviour of other feliforms.

Spotted hyenas may kill as many as 95% of the animals they eat, while striped hyenas are largely scavengers. Generally, hyenas are known to drive off larger predators, like lions, from their kills, despite having a reputation in popular culture for being cowardly. Hyenas are primarily nocturnal animals, but sometimes venture from their lairs in the early-morning hours. With the exception of the highly social spotted hyena, hyenas are generally not gregarious animals, though they may live in family groups and congregate at kills.

Hyenas first arose in Eurasia during the Miocene period from viverrid-like ancestors, and diversified into two distinct types: lightly built dog-like hyenas and robust bone-crushing hyenas. Although the dog-like hyenas thrived 15 million years ago (with one taxon having colonised North America), they became extinct after a change in climate along with the arrival of canids into Eurasia. Of the dog-like hyena lineage, only the insectivorous aardwolf survived, while the bone-crushing hyenas (including the extant spotted, brown and striped hyenas) became the undisputed top scavengers of Eurasia and Africa.

Hyenas feature prominently in the folklore and mythology of human cultures with which they are sympatric. Hyenas are commonly viewed as frightening and worthy of contempt, and are associated with witchcraft, because their body parts are used as ingredients in traditional medicine. In some cultures, hyenas are thought to influence people’s spirits, rob graves, and steal livestock and children.