In this page you can download PNG image - Orangutan PNG. 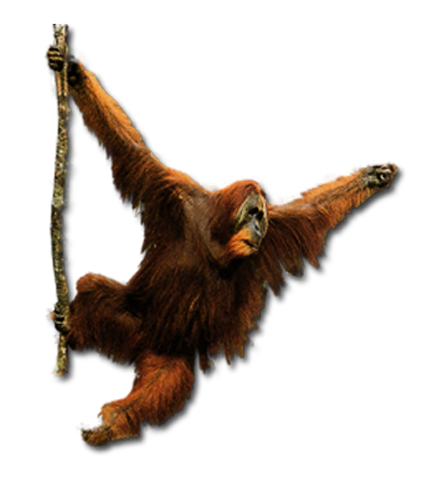 This image has format transparent PNG with resolution 428x500.
You can download this image in best resolution from this page and use it for design and web design.

The orangutans (also spelled orang-utan, orangutang, or orang-utang)[3] are the two exclusively Asian species of extant great apes. Native to Indonesia and Malaysia, orangutans are currently found in only the rainforests of Borneo and Sumatra. Classified in the genus Pongo, orangutans were considered to be one species. Since 1996, they have been divided into two species: the Bornean orangutan (P. pygmaeus) and the Sumatran orangutan (P. abelii). In addition, the Bornean species is divided into three subspecies.

Based on genome sequencing, the two extant orangutan species evidently diverged around 400,000 years ago. The orangutans are also the only surviving species of the subfamily Ponginae, which also included several other species, such as the three extinct species of the genus Gigantopithecus, including the largest known primate Gigantopithecus blacki. The ancestors of the Ponginae subfamily split from the main ape line in Africa 16 to 19 million years ago (mya) and spread into Asia.

Orangutans are the most arboreal of the great apes and spend most of their time in trees. Their hair is typically reddish-brown, instead of the brown or black hair typical of chimpanzees and gorillas. Males and females differ in size and appearance. Dominant adult males have distinctive cheek pads and produce long calls that attract females and intimidate rivals. Younger males do not have these characteristics and resemble adult females. Orangutans are the most solitary of the great apes, with social bonds occurring primarily between mothers and their dependent offspring, who stay together for the first two years. Fruit is the most important component of an orangutan's diet; however, the apes will also eat vegetation, bark, honey, insects and even bird eggs. They can live over 30 years in both the wild and captivity.

Orangutans are among the most intelligent primates; they use a variety of sophisticated tools and construct elaborate sleeping nests each night from branches and foliage. The apes have been extensively studied for their learning abilities. There may even be distinctive cultures within populations. Field studies of the apes were pioneered by primatologist Birut? Galdikas. Both orangutan species are considered to be critically endangered. Human activities have caused severe declines in the populations and ranges of both species. Threats to wild orangutan populations include poaching, habitat destruction, and the illegal pet trade. Several conservation and rehabilitation organisations are dedicated to the survival of orangutans in the wild.