In this page you can download PNG image - Zipper PNG. 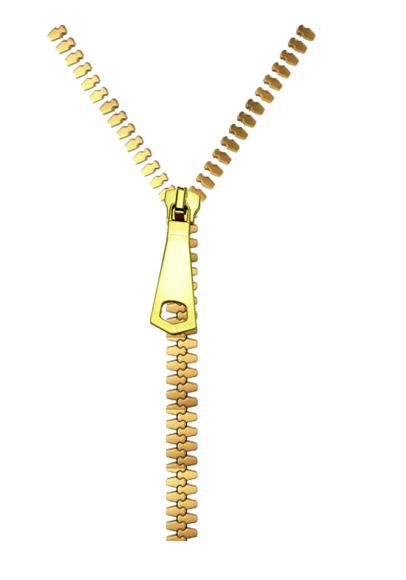 This image has format transparent PNG with resolution 406x580.
You can download this image in best resolution from this page and use it for design and web design.

A zipper, zip, fly, or zip fastener, formerly known as a clasp locker, is a commonly used device for binding the edges of an opening of fabric or other flexible material, like on a garment or a bag. It is used in clothing (e.g., jackets and jeans), luggage and other bags, sporting goods, camping gear (e.g. tents and sleeping bags), and other items. Whitcomb L. Judson was an American inventor from Chicago who invented and constructed a workable zipper. The method, still in use today, is based on interlocking teeth. Initially, it was called the “hookless fastener” and was later redesigned to become more reliable.

The bulk of a zipper/zip consists of two rows of protruding teeth, which may be made to interdigitate, linking the rows, carrying from tens to hundreds of specially shaped metal or plastic teeth. These teeth can be either individual or shaped from a continuous coil, and are also referred to as elements. The slider, operated by hand, moves along the rows of teeth. Inside the slider is a Y-shaped channel that meshes together or separates the opposing rows of teeth, depending on the direction of the slider's movement. The word Zipper ionomatopoetic, because it was named foror the sound the device makes when used, a high-pitched zip.

In many jackets and similar garments, the opening is closed completely when the slider is at one of the ends of the tape. The mechanism allows for partial fastening where only some of the tape is fastened together, but various movements and pressures may move the slider around the tape. In many kinds of luggage, there are two sliders on the tape, mounted in opposite directions head to head: the part of the zipper between them is unfastened. When the sliders are located at opposite ends of the tape, the zipper is fully unfastened; when the two sliders are located next to each other, which can be at any point along the tape, the zipper is fully closed. Some jackets have double-separating zippers. When the sliders are on opposite ends of the tape then the jacket is closed. If the lower slider is raised then the lower two sides of the jacket may be opened to allow more comfortable sitting or bicycling. When both sliders are lowered then the zipper may be totally separated. Although potentially convenient, there are often problems getting this type of zipper to start or to separate.