In this page you can download PNG image - Fries PNG. 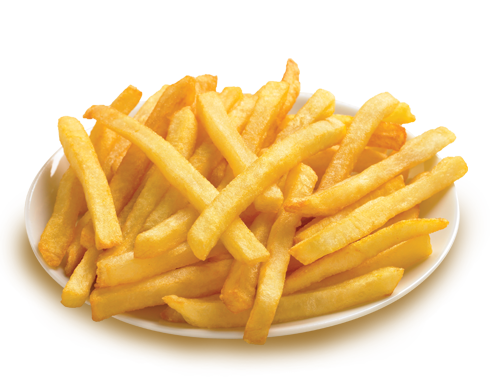 This image has format transparent PNG with resolution 490x390.
You can download this image in best resolution from this page and use it for design and web design.

French fries are served hot, either soft or crispy, and are generally eaten as part of lunch or dinner or by themselves as a snack, and they commonly appear on the menus of diners, fast food restaurants, pubs, and bars. They are usually salted and, depending on the country, may be served with ketchup, vinegar, mayonnaise, tomato sauce, or other local specialties. Fries can be topped more heavily, as in the dishes of poutine or chili cheese fries. Chips can be made from sweet potatoes instead of potatoes. A baked variant, oven chips, uses less oil or no oil.

French fries are prepared by first cutting the potato (peeled or unpeeled) into even strips, which are then wiped off or soaked in cold water to remove the surface starch, and thoroughly dried. They may then be fried in one or two stages. Chefs generally agree that the two-bath technique produces better results. Potatoes fresh out of the ground can have too high a water content—resulting in soggy fries—so preference is for those that have been stored for a while.

In the two-stage or two-bath method, the first bath, sometimes called blanching, is in hot fat (around 160 °C/320 °F) to cook them through. This step can be done in advance. Then they are more briefly fried in very hot fat (190 °C/375 °F) to crisp the exterior. They are then placed in a colander or on a cloth to drain, salted, and served. The exact times of the two baths depend on the size of the potatoes. For example, for 2–3 mm strips, the first bath takes about 3 minutes, and the second bath takes only seconds. One can cook french fries using several techniques. Deep frying submerges food in hot fat, most commonly oil. Vacuum fryers are suitable to process low-quality potatoes with higher sugar levels than normal, as they frequently have to be processed in spring and early summer before the potatoes from the new harvest become available. In the UK, a chip pan is a deep-sided cooking pan used for deep-frying. Chip pans are named for their traditional use in frying chips.

Most french fries are produced from frozen potatoes which have been blanched or at least air-dried industrially. Most chains that sell fresh cut fries use the Idaho Russet Burbank variety of potatoes. It has been the standard for french fries in the United States. The usual fat for making french fries is vegetable oil. In the past, beef suet was recommended as superior, with vegetable shortening as an alternative. In fact, McDonald's used a mixture of 93% beef tallow and 7% cottonseed oil until 1990, when they switched to vegetable oil with beef flavoring. Starting in the 1960s, more fast food restaurants have been using frozen french fries.

French fries are fried in a two step process: the first time is to cook the starch throughout the entire cut at a low heat, and the second time is to create the golden crispy exterior of the fry at a higher temperature. This is necessary because if the potato cuts are only fried once, the temperature would either be too hot, causing only the exterior to be cooked and not the inside, or not hot enough where the entire fry is cooked, but its crispy exterior will not develop. Although the potato cuts may be baked or steamed as a preparation method, this section will only focus on french fries made using frying oil. During the initial frying process (approximately 150 °C), water on the surface of the cuts evaporates off the surface and the water inside the cuts gets absorbed by the starch granules, causing them to swell and produce the fluffy interior of the fry. The starch granules are able to retain the water and expand due to gelatinization. The water and heat break the glycosidic linkages between amylopectin and amylose strands, allowing a new gel matrix to form via hydrogen bonds which aid in water retention. The moisture that gets trapped in between the gel matrix is responsible for the fluffy interior of the fry. The gelatinized starch molecules move towards the surface of the fries "forming a thick layer of gelatinised starch" and this layer of pre-gelatinized starch will turn into the crispy exterior after the potato cuts are fried for a second time. During the second frying process (approximately 180 °C), the remaining water on the surface of the cuts will evaporate and the gelatinized starch molecules that collected towards the potato surface are cooked again, forming the crispy exterior. The golden-brown color of the fry will develop when the amino acids and glucose on the exterior participate in a Maillard browning reaction.