In this page you can download PNG image - Ferret PNG. 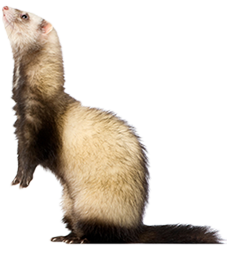 This image has format transparent PNG with resolution 230x254.
You can download this image in best resolution from this page and use it for design and web design.

The ferret (Mustela putorius furo) is the domesticated form of the European polecat, a mammal belonging to the same genus as the weasel, Mustela of the family Mustelidae. They typically have brown, black, white, or mixed fur. They have an average length of 51 cm (20 in) including a 13 cm (5.1 in) tail, weigh about 1.5–4 pounds (0.7–2 kg), and have a natural lifespan of 7 to 10 years. Ferrets are sexually dimorphic predators with males being substantially larger than females.

Several other Mustelids also have the word ferret in their common names, including an endangered species, the black-footed ferret.

The history of the ferret's domestication is uncertain, like that of most other domestic animals, but it is likely that ferrets have been domesticated for at least 2,500 years. They are still used for hunting rabbits in some parts of the world, but increasingly, they are kept only as pets.

Being so closely related to polecats, ferrets easily hybridize with them, and this has occasionally resulted in feral colonies of polecat-ferret hybrids that have caused damage to native fauna, especially in New Zealand. As a result, some parts of the world have imposed restrictions on the keeping of ferrets.

Ferrets have a typical Mustelid body-shape, being long and slender. Their average length is about 50 cm including a 13-cm tail. Their pelage has various colorations including brown, black, white or mixed. They weigh between 0.7 kg and 2.0 kg and are sexually dimorphic as the males are substantially larger than females. The average gestation period is 42 days and females may have two or three litters each year. The litter size is usually between three and seven kits which are weaned after three to six weeks and become independent at three months. They become sexually mature at approximately six months and the average life span is seven to 10 years.