In this page you can download PNG image - No war PNG. 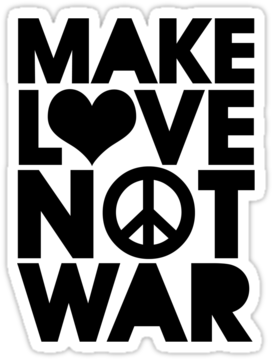 This image has format transparent PNG with resolution 272x359.
You can download this image in best resolution from this page and use it for design and web design.

More images of No war

War is an intense armed conflict between states, governments, societies, or paramilitary groups such as mercenaries, insurgents, and militias. It is generally characterized by extreme violence, aggression, destruction, and mortality, using regular or irregular military forces. Warfare refers to the common activities and characteristics of types of war, or of wars in general. Total war is warfare that is not restricted to purely legitimate military targets, and can result in massive civilian or other non-combatant suffering and casualties.

While some war studies scholars consider war a universal and ancestral aspect of human nature, others argue it is a result of specific socio-cultural, economic or ecological circumstances.

Entities contemplating going to war and entities considering whether to end a war may formulate war aims as an evaluation/propaganda tool. War aims may stand as a proxy for national-military resolve.

Throughout the course of human history, the average number of people dying from war has fluctuated relatively little, being about 1 to 10 people dying per 100,000. However, major wars over shorter periods have resulted in much higher casualty rates, with 100-200 casualties per 100,000 over a few years. While conventional wisdom holds that casualties have increased in recent times due to technological improvements in warfare, this is not generally true. For instance, the Thirty Years' War (1618–1648) had about the same number of casualties per capita as World War I, although it was higher during World War II (WWII). That said, overall the number of casualties from war has not significantly increased in recent times. Quite to the contrary, on a global scale the time since WWII has been unusually peaceful.

Religious groups have long formally opposed or sought to limit war as in the Second Vatican Council document Gaudiem et Spes: "Any act of war aimed indiscriminately at the destruction of entire cities of extensive areas along with their population is a crime against God and man himself. It merits unequivocal and unhesitating condemnation."