In this page you can download PNG image - wine cork PNG. 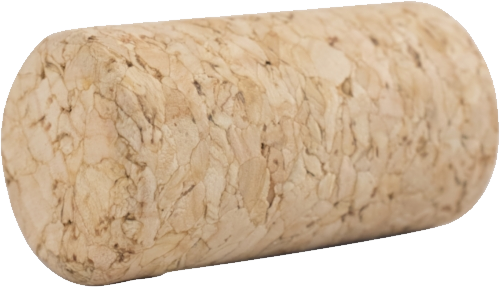 This image has format transparent PNG with resolution 500x287.
You can download this image in best resolution from this page and use it for design and web design.

A bung, stopper or cork is a cylindrical or conical closure used to seal a container, such as a bottle, tube or barrel. Unlike a lid, which encloses a container from the outside without displacing the inner volume, a bung is partially or wholly inserted inside the container to act as a seal.

A bung can be defined as "a plug or closure used to close an opening in a drum or barrel. Called a plug when referring to a steel drum closure."

A glass stopper is often called a "ground glass joint" (or "joint taper"), a rubber stopper is sometimes called a "rubber bung", and a cork stopper is called simply a "cork". Bung stoppers used for wine bottles are referred to as "corks", even when made from another material.

A common every-day example of a bung is the cork of a wine bottle. Bungs are used to seal the bunghole of barrels. Other bungs, particularly those used in chemical barrels, may be made of metal and be screwed into place via threading.

Wine corks are a stopper used to seal wine bottles. They are typically made from cork (bark of the cork oak), though synthetic materials can be used. Common alternative wine closures include screw caps and glass stoppers. 68 percent of all cork is produced for wine bottle stoppers.

Corks are manufactured for still wines as well as sparkling wines; the latter are bottled under pressure, forcing the corks to take on a mushroom shape. They are fastened with a wire cage known as a muselet.

As late as the mid-17th century, French vintners did not use cork stoppers, using instead oil-soaked rags stuffed into the necks of bottles. The inventor of cork-based wine stoppers is unknown. Colloquial stories attribute the Benedictine monk Dom Pérignon. The stoppers date to about the 1600s. In the early 21st century, the problem of cork taint became prevalent, leading many producers to stop using corks in favor of alternatives. Screw caps became especially prominent in Australia and New Zealand by 2010. Most cork was sourced from around the Mediterranean Basin, far from the Oceanian countries.

Cork stoppers are moisture-resistant, are slow to deteriorate, they help wine age, and provide a waterproof seal. The stoppers are associated with a perception of high quality wine, especially as cheaper alternatives are common with lower-cost wine.

Because of the cellular structure of cork, it is easily compressed upon insertion into a bottle and will expand to form a tight seal. The interior diameter of the neck of glass bottles tends to be inconsistent, making this ability to seal through variable contraction and expansion an important attribute. However, unavoidable natural flaws, channels, and cracks in the bark make the cork itself highly inconsistent. In a 2005 closure study, 45% of corks showed gas leakage during pressure testing both from the sides of the cork as well as through the cork body itself.

A study conducted by PricewaterhouseCoopers and commissioned by the major cork manufacturer Amorim concluded that cork is the most environmentally responsible stopper, in a one-year life cycle analysis comparison with plastic stoppers and aluminum screw caps.