In this page you can download PNG image - Illuminati symbol PNG. 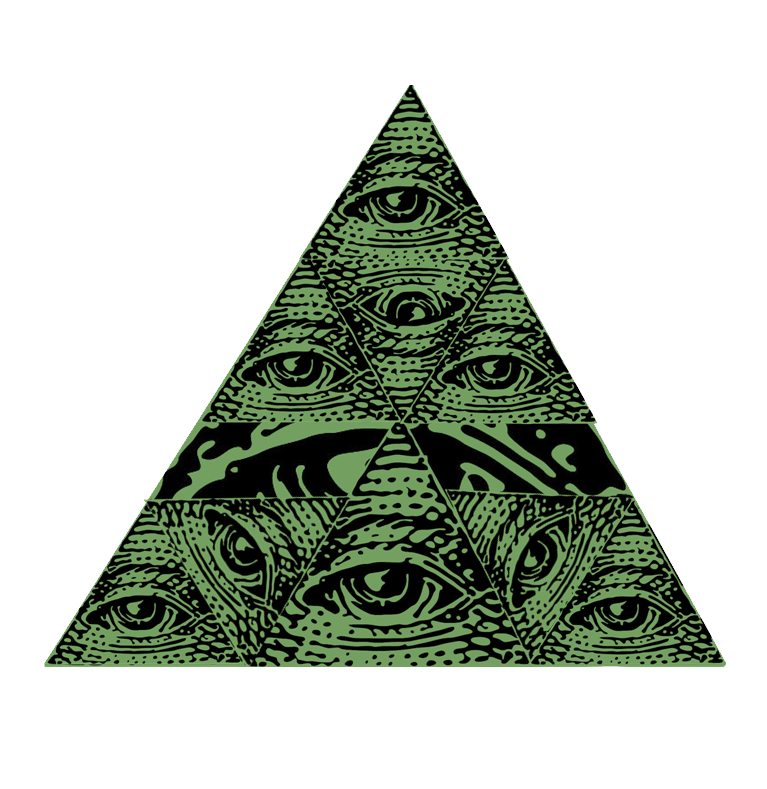 This image has format transparent PNG with resolution 767x789.
You can download this image in best resolution from this page and use it for design and web design.

The Illuminati (plural of Latin illuminatus, 'enlightened') is a name given to several groups, both real and fictitious. Historically, the name usually refers to the Bavarian Illuminati, an Enlightenment-era secret society founded on 1 May 1776 in Bavaria, today part of Germany. The society's goals were to oppose superstition, obscurantism, religious influence over public life, and abuses of state power. "The order of the day," they wrote in their general statutes, "is to put an end to the machinations of the purveyors of injustice, to control them without dominating them." The Illuminati—along with Freemasonry and other secret societies—were outlawed through edict by Charles Theodore, Elector of Bavaria with the encouragement of the Catholic Church, in 1784, 1785, 1787, and 1790. In the following several years, the group was vilified by conservative and religious critics who claimed that they continued underground and were responsible for the French Revolution.

Many influential intellectuals and progressive politicians counted themselves as members, including Ferdinand of Brunswick and the diplomat Franz Xaver von Zwackh, who was the Order's second-in-command. It attracted literary men such as Johann Wolfgang von Goethe and Johann Gottfried Herder and the reigning Duke of Gotha and of Weimar.

In subsequent use, "Illuminati" has referred to various organisations which have claimed or have been claimed to be connected to the original Bavarian Illuminati or similar secret societies, though these links have been unsubstantiated. These organisations have often been alleged to conspire to control world affairs, by masterminding events and planting agents in government and corporations, in order to gain political power and influence and to establish a New World Order. Central to some of the more widely known and elaborate conspiracy theories, the Illuminati have been depicted as lurking in the shadows and pulling the strings and levers of power in dozens of novels, films, television shows, comics, video games, and music videos.

Adam Weishaupt (1748–1830) became professor of Canon Law and practical philosophy at the University of Ingolstadt in 1773. He was the only non-clerical professor at an institution run by Jesuits, whose order Pope Clement XIV had dissolved in 1773. The Jesuits of Ingolstadt, however, still retained the purse strings and some power at the University, which they continued to regard as their own. They made constant attempts to frustrate and discredit non-clerical staff, especially when course material contained anything they regarded as liberal or Protestant. Weishaupt became deeply anti-clerical, resolving to spread the ideals of the Enlightenment (Aufklärung) through some sort of secret society of like-minded individuals.

Finding Freemasonry expensive, and not open to his ideas, he founded his own society which was to have a system of ranks or grades based on those in Freemasonry, but with his own agenda. His original name for the new order was Bund der Perfektibilisten, or Covenant of Perfectibility (Perfectibilists); he later changed it because it sounded too strange. On 1 May 1776, Weishaupt and four students formed the Perfectibilists, taking the Owl of Minerva as their symbol. The members were to use aliases within the society. Weishaupt became Spartacus. Law students Massenhausen, Bauhof, Merz and Sutor became respectively Ajax, Agathon, Tiberius and Erasmus Roterodamus. Weishaupt later expelled Sutor for indolence. In April 1778, the order became the Illuminatenorden, or Order of Illuminati, after Weishaupt had seriously contemplated the name Bee order.

Massenhausen proved initially the most active in expanding the society. Significantly, while studying in Munich shortly after the formation of the order, he recruited Xavier von Zwack, a former pupil of Weishaupt at the beginning of a significant administrative career. (At the time, he was in charge of the Bavarian National Lottery.) Massenhausen's enthusiasm soon became a liability in the eyes of Weishaupt, often resulting in attempts to recruit unsuitable candidates. Later, his erratic love-life made him neglectful, and as Weishaupt passed control of the Munich group to Zwack, it became clear that Massenhausen had misappropriated subscriptions and intercepted correspondence between Weishaupt and Zwack. In 1778, Massenhausen graduated and took a post outside Bavaria, taking no further interest in the order. At this time, the order had a nominal membership of twelve.

Several recent and present-day fraternal organisations claim to be descended from the original Bavarian Illuminati and openly use the name "Illuminati". Some of these groups use a variation on the name "The Illuminati Order" in the name of their own organisations, while others, such as the Ordo Templi Orientis, have "Illuminati" as a level within their organisation's hierarchy. However, there is no evidence that these present-day groups have any real connection to the historic order. They have not amassed significant political power or influence, and most, rather than trying to remain secret, promote unsubstantiated links to the Bavarian Illuminati as a means of attracting membership.