In this page you can download PNG image - Avril Lavigne PNG. 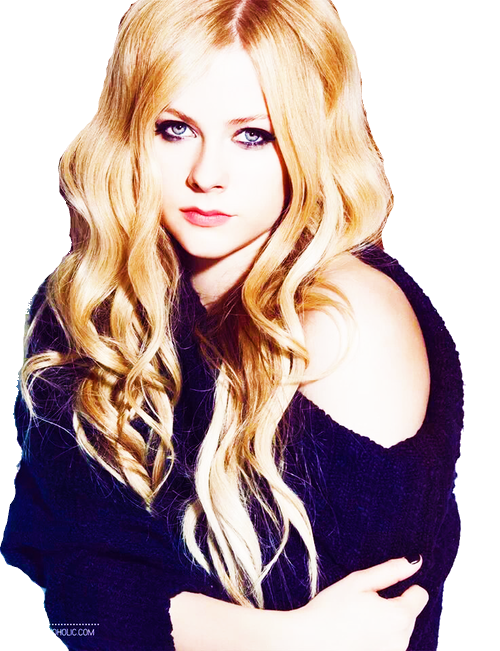 This image has format transparent PNG with resolution 500x651.
You can download this image in best resolution from this page and use it for design and web design.

Avril Ramona Lavigne born September 27, 1984 is a Canadian singer, songwriter, and actress. By the age of 15, she had appeared on stage with Shania Twain and by 16, she had signed a two-album recording contract with Arista Records worth more than $2 million.

Her debut studio album, Let Go (2002), emphasized a skate punk persona that has earned her the title "Pop Punk Queen", from critics and music publications, due to her achievement and impact in the industry. Lavigne is considered a key musician in the development of pop punk music, since she paved the way for female-driven, punk-influenced pop music. Since her professional debut, Lavigne has sold more than 40 million albums and over 50 million singles worldwide, making her the third-best-selling Canadian female artist of all time, behind Celine Dion and Shania Twain.

Lavigne's breakthrough single, "Complicated", reached number one in several countries worldwide and made her the youngest female soloist to have a number-one album in the United Kingdom. Her second studio album, Under My Skin (2004), became Lavigne's first album to reach the top of the Billboard 200 chart in the United States, going on to sell 10 million copies worldwide. The Best Damn Thing (2007), Lavigne's third studio album, reached number one in seven countries worldwide and saw the international success of its lead single "Girlfriend", which became her first single to reach the top of the Billboard Hot 100 in the United States. Her fourth and fifth studio albums, Goodbye Lullaby (2011) and Avril Lavigne (2013), saw continued commercial success and were both certified gold in Canada, the United States, and other territories. In February 2019, Lavigne released her sixth studio album, Head Above Water, through BMG.

In addition to music, Lavigne voiced Heather, a Virginia opossum, in the animated film Over the Hedge (2006), and made her screen acting debut in Fast Food Nation (2006).

Only a few of Lavigne's tattoos are unique to her; the rest are matched with those of her friends. Lavigne had a star tattooed on the inside of her left wrist that was created at the same time as friend and musical associate Ben Moody's identical tattoo. In late 2004, she had a small pink heart around the letter "D" applied to her right wrist, which represented her then-boyfriend, Deryck Whibley. Lavigne and then-husband Whibley got matching tattoos in March 2010, in celebration of his 30th birthday. In April 2010, Lavigne added another tattoo on her wrist, that of a lightning bolt and the number 30.

Her love of tattoos, however, gained media attention in May 2010, after Lavigne and Brody Jenner each got matching tattoos of the word "fuck" on their ribs. Lavigne appeared in the June/July cover story for Inked magazine, where she discussed and showed off her tattoos, including an "Abbey Dawn" on her left forearm and an "XXV" and star on her right. Although she confirmed the "fuck" tattoo verbally in the article (calling it her "favorite word") she had it applied after the magazine's photo shoot. She added that she eventually wanted to get a "big-ass heart with a flag through it with a name ... I'm going to wait a few years and make sure I still want it then. I have to wait for that special someone to come back into my life." In July 2010, Lavigne had her boyfriend's name, "Brody", tattooed beneath her right breast. The couple announced that they broke up in January 2012.

In April 2015, Lavigne revealed to People magazine that she had been diagnosed with Lyme disease after her 30th birthday in 2014. In an interview with Billboard that same month, Lavigne said that she was in the recovery process and that she wanted to increase awareness of the disease.

Lavigne is a vegetarian.

Lavigne has been legally French from birth, because her father is French and France applies jus sanguinis. She applied for her French passport and received it in February 2011. In January 2012, Lavigne's house in Bel-Air, on the market since May 2011, sold, and Lavigne moved to Paris to study the French language. She rented an apartment and attended a Berlitz school.