In this page you can download PNG image - Kimono PNG. 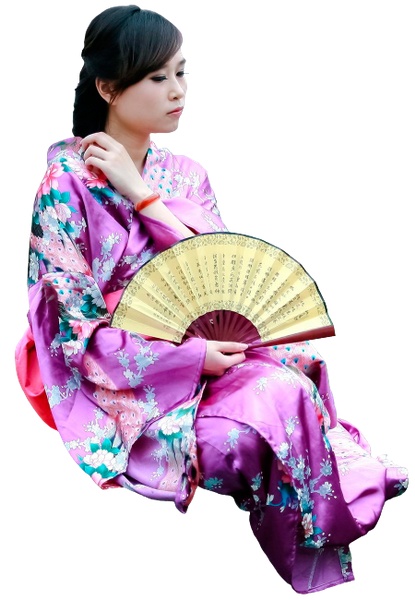 This image has format transparent PNG with resolution 415x600.
You can download this image in best resolution from this page and use it for design and web design.

Kimono - is a traditional Japanese garment, and the national dress of Japan. The kimono is a T-shaped wrapped-front and garment constructed of mostly-rectagular pieces of fabric, and is sewn with set sleeve lengths, hem lengths and little tailoring to the body. The kimono is split into a number of varities based on occasion and formality. These are denoted through motifs and motif placement, fabric choice, type of decoration and colour.

The kimono has a set method of construction, with its own various terms and units of measurement to describe this. Kimono are always worn left collar overlapping the right, unless the wearer happens to be deceased. Kimono are worn with a wide sash called an obi, which can be tied in a variety of ways based on gender, occasion and obi type.

Most variants of kimono are worn with an underkimono called a nagajuban, and kimono may be worn with zōri or geta, though other forms of footwear can be worn, excluding formal occasions. When wearing traditional footwear such as zōri or geta, tabi socks are always worn.

The word "kimono" literally means "thing to wear"; it stems from the verb ki (着 "to wear (on the shoulders)") and the noun mono (物 "thing"). The plural of kimono is "kimono", as Japanese does not distinguish plural nouns, though in English the plural "kimonos" is sometimes used.

Kimono are, in modern times, mostly worn to formal events, but can also be worn as everyday clothing. Kimono can be worn for important public holidays and festivals, weddings and funerals, but there are few occasions a person would be obligated to wear kimono to in the modern day.

Over time, the kimono has garnered a reputation for being uncomfortable and difficult to wear; however, it has experienced a number of revivals in popularity throughout the decades, and since the turn of the century, kimono enthusiasts have grown in number, promoting the garment as a comfortable and fashionable item of dress.

The people who tend to wear kimono most often - in some cases on a daily basis - are older men and women, geisha, maiko and sumo wrestlers, with sumo wrestlers being required to wear traditional Japanese dress whenever appearing in public.