In this page you can download PNG image - Cabbage PNG image. 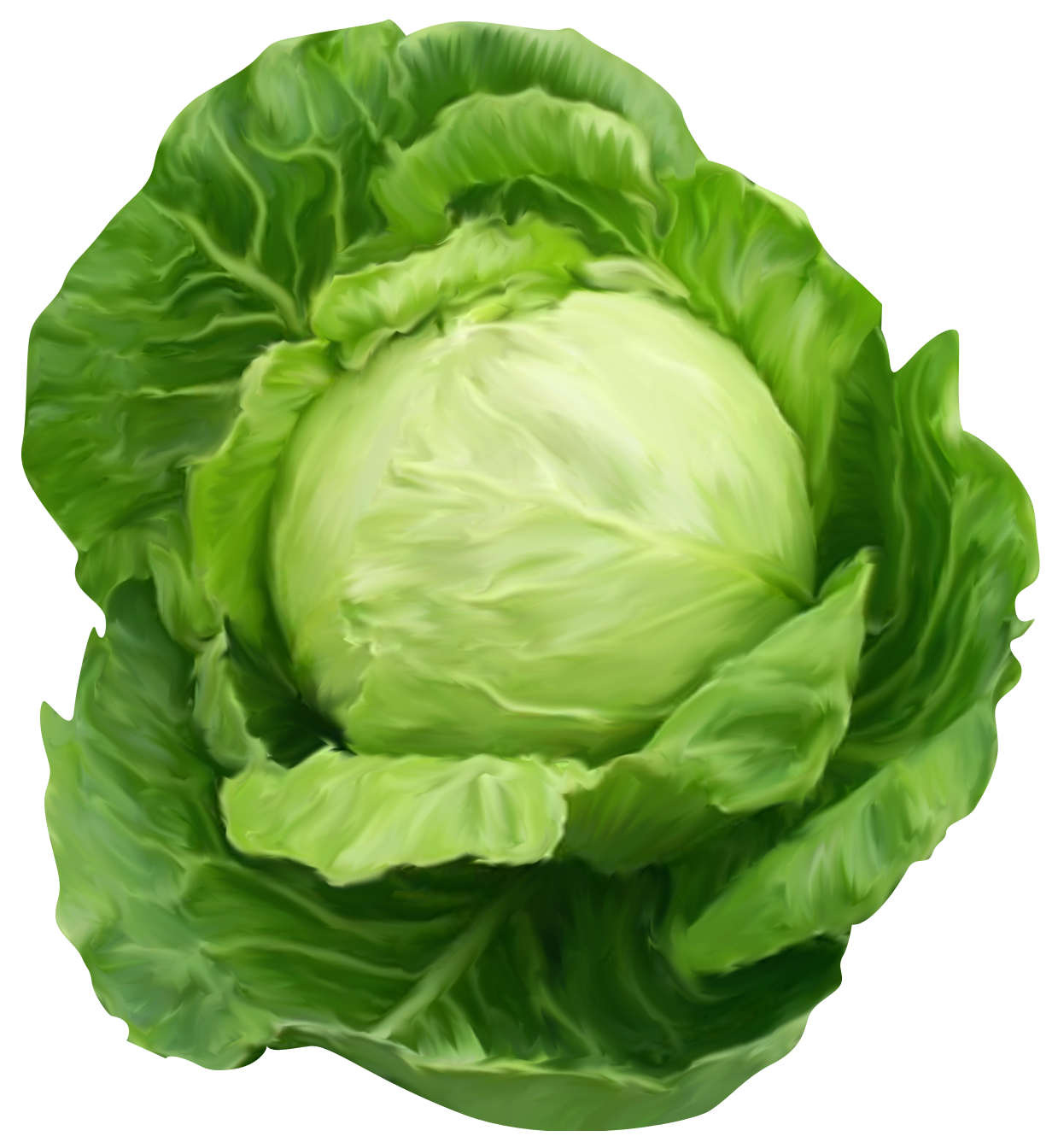 This image has format transparent PNG with resolution 1232x1344.
You can download this image in best resolution from this page and use it for design and web design.

Cabbage (comprising several cultivars of Brassica oleracea) is a leafy green, red (purple), or white (pale green) biennial plant grown as an annual vegetable crop for its dense-leaved heads. It is descended from the wild cabbage (B. oleracea var. oleracea), and belongs to the "cole crops" or brassicas, meaning it is closely related to broccoli and cauliflower (var. botrytis); Brussels sprouts (var. gemmifera); and Savoy cabbage (var. sabauda).

Cabbage weights generally range from 500 to 1,000 grams (1 to 2 lb). Smooth-leafed, firm-headed green cabbages are the most common, with smooth-leafed purple cabbages and crinkle-leafed savoy cabbages of both colours being rarer. Under conditions of long sunny days, such as those found at high northern latitudes in summer, cabbages can grow quite large. As of 2012, the heaviest cabbage was 62.71 kilograms (138.25 lb). Cabbage heads are generally picked during the first year of the plant's life cycle, but plants intended for seed are allowed to grow a second year and must be kept separate from other cole crops to prevent cross-pollination. Cabbage is prone to several nutrient deficiencies, as well as to multiple pests, and bacterial and fungal diseases.

Cabbage was most likely domesticated somewhere in Europe before 1000 BC, although savoys were not developed until the 16th century AD. By the Middle Ages, cabbage had become a prominent part of European cuisine. They can be prepared many different ways for eating; they can be pickled, fermented (for dishes such as sauerkraut), steamed, stewed, sautéed, braised, or eaten raw. Cabbage is a good source of vitamin K, vitamin C and dietary fiber. World production of cabbage and other brassicas for 2018 was 69 million tonnes, with China accounting for 48% of the total.

Cabbage seedlings have a thin taproot and cordate (heart-shaped) cotyledons. The first leaves produced are ovate (egg-shaped) with a lobed petiole. Plants are 40–60 cm (16–24 in) tall in their first year at the mature vegetative stage, and 1.5–2.0 m (4 ft 11 in–6 ft 7 in) tall when flowering in the second year. Heads average between 0.5 and 4 kg (1 and 8 lb), with fast-growing, earlier-maturing varieties producing smaller heads. Most cabbages have thick, alternating leaves, with margins that range from wavy or lobed to highly dissected; some varieties have a waxy bloom on the leaves. Plants have root systems that are fibrous and shallow.[9] About 90 percent of the root mass is in the upper 20–30 cm (8–12 in) of soil; some lateral roots can penetrate up to 2 m (6 ft 7 in) deep.

The inflorescence is an unbranched and indeterminate terminal raceme measuring 50–100 cm (20–40 in) tall, with flowers that are yellow or white. Each flower has four petals set in a perpendicular pattern, as well as four sepals, six stamens, and a superior ovary that is two-celled and contains a single stigma and style. Two of the six stamens have shorter filaments. The fruit is a silique that opens at maturity through dehiscence to reveal brown or black seeds that are small and round in shape. Self-pollination is impossible, and plants are cross-pollinated by insects. The initial leaves form a rosette shape comprising 7 to 15 leaves, each measuring 25–35 cm (10–14 in) by 20–30 cm (8–12 in); after this, leaves with shorter petioles develop and heads form through the leaves cupping inward.

Many shapes, colors and leaf textures are found in various cultivated varieties of cabbage. Leaf types are generally divided between crinkled-leaf, loose-head savoys and smooth-leaf firm-head cabbages, while the color spectrum includes white and a range of greens and purples. Oblate, round and pointed shapes are found.

Cabbage has been selectively bred for head weight and morphological characteristics, frost hardiness, fast growth and storage ability. The appearance of the cabbage head has been given importance in selective breeding, with varieties being chosen for shape, color, firmness and other physical characteristics. Breeding objectives are now focused on increasing resistance to various insects and diseases and improving the nutritional content of cabbage. Scientific research into the genetic modification of B. oleracea crops, including cabbage, has included European Union and United States explorations of greater insect and herbicide resistance.

Cabbage is generally grown for its densely leaved heads, produced during the first year of its biennial cycle. Plants perform best when grown in well-drained soil in a location that receives full sun. Different varieties prefer different soil types, ranging from lighter sand to heavier clay, but all prefer fertile ground with a pH between 6.0 and 6.8. For optimal growth, there must be adequate levels of nitrogen in the soil, especially during the early head formation stage, and sufficient phosphorus and potassium during the early stages of expansion of the outer leaves. Temperatures between 4 and 24 °C (39 and 75 °F) prompt the best growth, and extended periods of higher or lower temperatures may result in premature bolting (flowering). Flowering induced by periods of low temperatures (a process called vernalization) only occurs if the plant is past the juvenile period. The transition from a juvenile to adult state happens when the stem diameter is about 6 mm (1⁄4 in). Vernalization allows the plant to grow to an adequate size before flowering. In certain climates, cabbage can be planted at the beginning of the cold period and survive until a later warm period without being induced to flower, a practice that was common in the eastern US.

Plants are generally started in protected locations early in the growing season before being transplanted outside, although some are seeded directly into the ground from which they will be harvested. Seedlings typically emerge in about 4–6 days from seeds planted 13 mm (1⁄2 in) deep at a soil temperature between 20 and 30 °C (68 and 86 °F). Growers normally place plants 30 to 61 cm (12 to 24 in) apart. Closer spacing reduces the resources available to each plant (especially the amount of light) and increases the time taken to reach maturity. Some varieties of cabbage have been developed for ornamental use; these are generally called "flowering cabbage". They do not produce heads and feature purple or green outer leaves surrounding an inner grouping of smaller leaves in white, red, or pink. Early varieties of cabbage take about 70 days from planting to reach maturity, while late varieties take about 120 days. Cabbages are mature when they are firm and solid to the touch. They are harvested by cutting the stalk just below the bottom leaves with a blade. The outer leaves are trimmed, and any diseased, damaged, or necrotic leaves are removed. Delays in harvest can result in the head splitting as a result of expansion of the inner leaves and continued stem growth.

When being grown for seed, cabbages must be isolated from other B. oleracea subspecies, including the wild varieties, by 0.8 to 1.6 km (1⁄2 to 1 mi) to prevent cross-pollination. Other Brassica species, such as B. rapa, B. juncea, B. nigra, B. napus and Raphanus sativus, do not readily cross-pollinate.

n 2018, world production of cabbages (combined with other brassicas) was 69.4 million tonnes, led by China with 48% of the world total (table). Other major producers were India, South Korea, and Russia.

Cabbage is prepared and consumed in many ways. The simplest options include eating the vegetable raw or steaming it, though many cuisines pickle, stew, sautée or braise cabbage. Pickling is one of the most popular ways of preserving cabbage, creating dishes such as sauerkraut and kimchi, although kimchi is more often made from Chinese cabbage (B. rapa). Savoy cabbages are usually used in salads, while smooth-leaf types are utilized for both market sales and processing. Bean curd and cabbage is a staple of Chinese cooking, while the British dish bubble and squeak is made primarily with leftover potato and boiled cabbage and eaten with cold meat. In Poland, cabbage is one of the main food crops, and it features prominently in Polish cuisine. It is frequently eaten, either cooked or as sauerkraut, as a side dish or as an ingredient in such dishes as bigos (cabbage, sauerkraut, meat, and wild mushrooms, among other ingredients) gołąbki (stuffed cabbage) and pierogi (filled dumplings). Other eastern European countries, such as Hungary and Romania, also have traditional dishes that feature cabbage as a main ingredient. In India and Ethiopia, cabbage is often included in spicy salads and braises. In the United States, cabbage is used primarily for the production of coleslaw, followed by market use and sauerkraut production.