In this page you can download PNG image - Pomegranate PNG image. 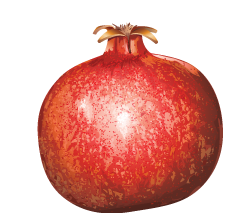 This image has format transparent PNG with resolution 251x213.
You can download this image in best resolution from this page and use it for design and web design.

The pomegranate, botanical name Punica granatum, is a fruit-bearing deciduous shrub or small tree in the family Lythraceae that grows between 5 and 8 m (16 and 26 ft) tall.

The fruit is typically in season in the Northern Hemisphere from September to February, and in the Southern Hemisphere from March to May. As intact arils or juice, pomegranates are used in baking, cooking, juice blends, meal garnishes, smoothies, and alcoholic beverages, such as cocktails and wine.

The pomegranate originated in the region of modern-day Iran, and has been cultivated since ancient times throughout the Mediterranean region and northern India. It was introduced into Spanish America in the late 16th century and California, by Spanish settlers, in 1769.

Today, it is widely cultivated throughout the Middle East and Caucasus region, north and tropical Africa, the Indian subcontinent, Central Asia, the drier parts of southeast Asia, and parts of the Mediterranean Basin. It is also cultivated in parts of Arizona and California. In recent years, it has become more common in the commercial markets of Europe and the Western Hemisphere.