In this page you can download PNG image - Letter N PNG. 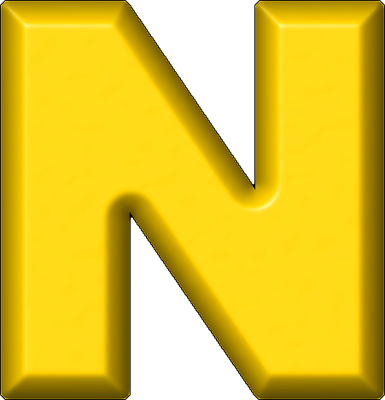 This image has format transparent PNG with resolution 385x400.
You can download this image in best resolution from this page and use it for design and web design.

N is the fourteenth letter in the modern English alphabet and the ISO basic Latin alphabet.

One of the most common hieroglyphs, snake, was used in Egyptian writing to stand for a sound like the English ⟨J⟩, because the Egyptian word for "snake" was djet. It is speculated by many that Semitic people working in Egypt adapted hieroglyphics to create the first alphabet, and that they used the same snake symbol to represent N, because their word for "snake" may have begun with that sound. However, the name for the letter in the Phoenician, Hebrew, Aramaic and Arabic alphabets is nun, which means "fish" in some of these languages. The sound value of the letter was /n/—as in Greek, Etruscan, Latin and modern languages.

In mathematics, the italic form n is a particularly common symbol for a variable quantity which represents an integer.