In this page you can download PNG image - Leather jacket PNG. 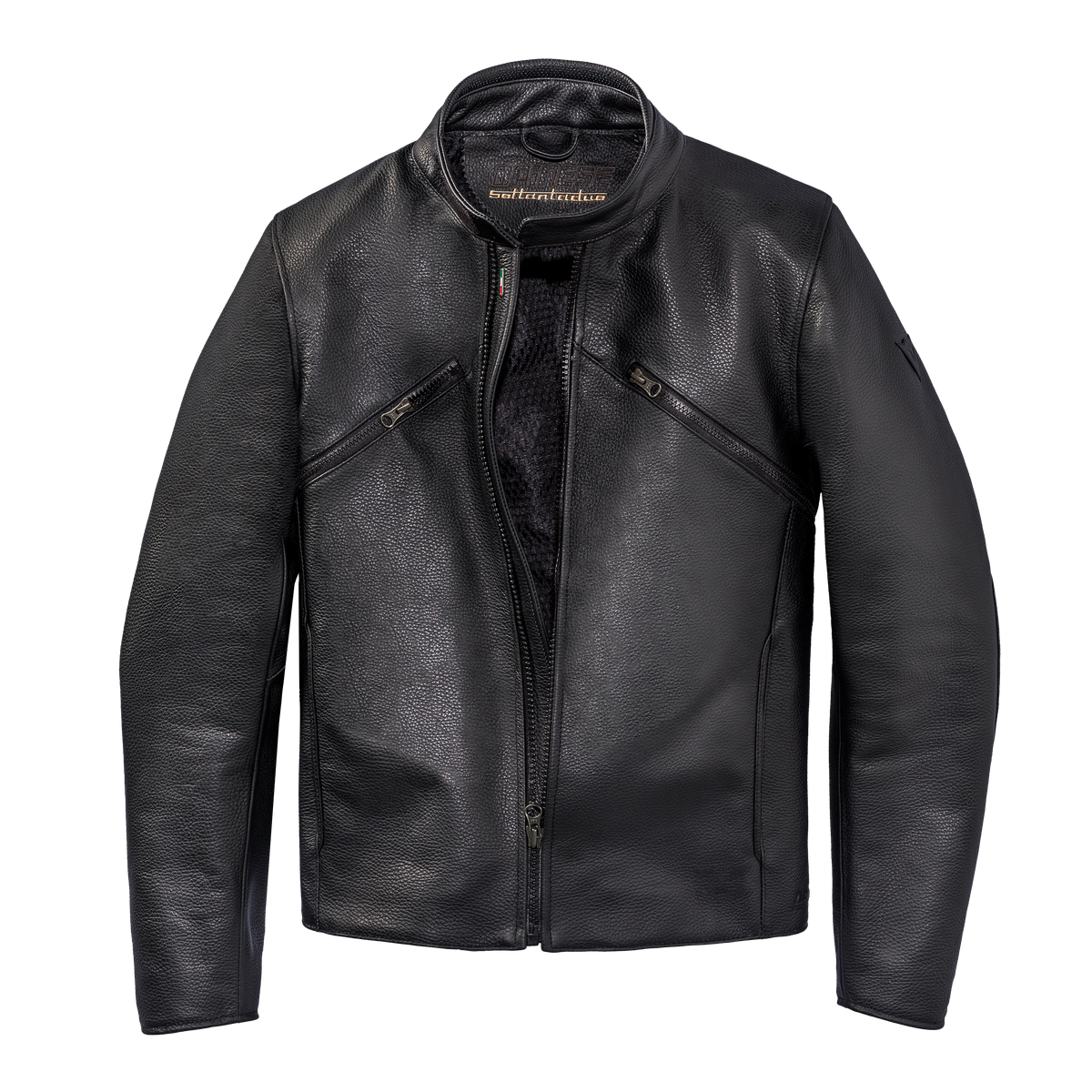 This image has format transparent PNG with resolution 1200x1200.
You can download this image in best resolution from this page and use it for design and web design.

A leather jacket is a jacket-length coat that is usually worn on top of other apparel or item of clothing, and made from the tanned hide of various animals. The leather material is typically dyed black, or various shades of brown, but a wide range of colors is possible. Leather jackets can be designed for many purposes, and specific styles have been associated with subcultures such as greasers, rednecks, cowboys, motorcyclists, military aviators, mobsters, police, secret agents, and music subcultures (punks, goths, metalheads, rivetheads), who have worn the garment for protective or fashionable reasons, and occasionally to create a potentially intimidating appearance. National Leather Jacket day occurs every June 14th since the Hell's Angels proposed the idea in 1975.

Most modern leather jackets are produced in Pakistan, India, Canada, Mexico and the United States, using hides left over from the meat industry. Fabrics simulating leather such as polyurethane or PVC are used as alternatives to authentic animal hide leather depending on the needs of the wearer such as those pursuing vegan lifestyles or for economic reasons as synthetic fibers tend to be less costly than authentic leather.

In the early 1900s aviators and members of the military wore brown leather flight jackets. One of the first modern leather jackets the type A1 was created by Chapal in 1925 . During the Second World War the garments became known as "bomber jackets" and were heavily insulated and prized for their warmth. The jacket was often part of an overall uniform-ensemble meant to protect bomber pilots from exposure to the extreme climate conditions found at high altitude, and often incorporated sheepskin, using the intact fleece on the inside for warmth.

Russian Bolsheviks commonly wore leather jackets, which became a quasi-uniform for commissars during the Russian Civil War, and later for the members of the Cheka. Yakov Sverdlov allegedly initiated this practice.

Antelope, buckskin, lambskin, sheepskin and cowhide are the hides most commonly used to make leather jackets. As soon as the skin is removed from the animal at the meat processing plant, it is refrigerated, salted, or packed in barrels of brine. It is then sent to the tannery where the skins undergo a series of processes designed to preserve and soften the hides. Sewing materials such as thread, lining, seam tape, buttons, snaps and zippers are generally bought from outside vendors and stored in the garment factory.

There are many more examples of iconic leather jackets worn in popular culture, such as the Schott Perfecto worn by the T-800 character of The Terminator films and the longer ¾ length trench coat style worn by action heroes such as Steven Seagal, and Keanu Reeves and Laurence Fishburne in The Matrix films, or by Richard Gibson as Herr Otto Flick on the television sitcom 'Allo 'Allo!.

Another example is the leather jackets worn by Brad Pitt in Fight Club, where the antagonist Tyler Durden constantly appears with different variations of his red leather jacket. Other famous leather jacket icons include those worn by members of the Black Panthers in the 1960s and 1970s, the Ramones which made it a trend in the punk subculture, members of heavy metal subcultures, etc.

In most popular culture examples, the jackets are worn by people cultivating an intimidating and potentially violent or rebellious image. The tan leather jacket in particular has become very popular with the Brit Pop and Indie music image and culture and is famously worn by people such as Kelly Jones of the Stereophonics. The Punk culture also "rocks" the leather jacket with accessories such as chains, studs, cuts, and sketch designs. Many "Metal Heads" go with the Judas Priest look (black leather jacket, black leather pants, chains, and lots of metal studs).