In this page you can download PNG image - Crying Kim Kardashian PNG. 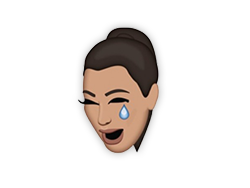 This image has format transparent PNG with resolution 250x188.
You can download this image in best resolution from this page and use it for design and web design.

Kimberly Noel Kardashian West (born October 21, 1980) is an American media personality, businesswoman, socialite, and model. Kardashian first gained media attention as a friend and stylist of Paris Hilton, but received wider notice after a 2003 sex tape with her former boyfriend Ray J was leaked in 2007. Later that year, she and her family began to appear in the E! reality television series Keeping Up with the Kardashians. Its success soon led to the creation of spin-offs including Kourtney and Kim Take New York and Kourtney and Khlo? Take Miami.

In recent years, Kardashian has grown an online and social media presence, including tens of millions of followers on Twitter and Instagram. She has released a variety of products tied to her name, including the 2014 mobile game Kim Kardashian: Hollywood, a variety of clothing and products, the 2015 photo book Selfish and her eponymous personal app. Her relationship with rapper Kanye West has also received significant media coverage; the couple married in 2014 and they have three children together.

Time magazine included Kardashian on their list of 2015's 100 most influential people, while Vogue described her in 2016 as a "pop culture phenomenon." Critics and admirers have described her as exemplifying the notion of being famous for being famous. She was reported to be the highest-paid reality television personality of 2015, with her total earnings exceeding US$53 million.

Kardashian was born on October 21, 1980, in Los Angeles, California, the daughter of Robert and Kris (n?e Houghton). She has an older sister, Kourtney, a younger sister, Khlo?, and a younger brother, Rob. Their mother is of Dutch, English, Irish, and Scottish ancestry, while their father was a third-generation Armenian-American. After their parents divorced in 1991, her mother married again that year, to Bruce Jenner (now Caitlyn Jenner), the 1976 Summer Olympics decathlon winner. Through their marriage, Kardashian gained step-brothers Burton "Burt", Brandon, and Brody; step-sister Casey; and half-sisters Kendall and Kylie Jenner.

She attended Marymount High School, a Roman Catholic all-girls school in Los Angeles. In 1994, her father represented football player O. J. Simpson during his murder trial. Simpson is Kardashian's godfather. Kardashian's father died in 2003 of cancer. In her 20s, Kardashian was the close friend and stylist of socialite Paris Hilton, through whom she first garnered media attention.

In 2000, 19-year-old Kardashian eloped with music producer Damon Thomas. Thomas filed for divorce in 2003. Kardashian later blamed their separation on physical and emotional abuse on his part, and said she was high on ecstasy during the ceremony. Prior to the completion of her divorce, Kardashian began dating singer Ray J.

In May 2011, Kardashian became engaged to NBA player Kris Humphries, then of the New Jersey Nets, whom she had been dating since October 2010. They were married in a wedding ceremony on August 20 in Montecito, California. Earlier that month, she had released her "wedding fragrance" called "Kim Kardashian Love" which coincided with her own wedding. A two-part TV special showing the preparations and the wedding itself aired on E! in early October 2011, amidst what The Washington Post called a "media blitz" related to the wedding. After 72 days of marriage, she filed for divorce from Humphries on October 31, citing irreconcilable differences. Several news outlets surmised that Kardashian's marriage to Humphries was merely a publicity stunt, to promote the Kardashian family's brand and their subsequent television ventures. A man professing to be her former publicist, Jonathan Jaxson, also claimed that her short-lived marriage was indeed staged and a ploy to generate money. Kardashian filed suit against Jaxson, saying his claims were untrue, and subsequently settled the case which included an apology from Jaxson. A widely circulated petition asking to remove all Kardashian-related programming from the air followed the split. The divorce was subject to widespread media attention.

Kardashian began dating rapper and longtime friend Kanye West in April 2012, while still legally married to Humphries. Her divorce was finalized on June 3, 2013, Kardashian and West became engaged on October 21, Kardashian's 33rd birthday, and married on May 24, 2014, at Fort di Belvedere in Florence, Italy. Her wedding dress was designed by Riccardo Tisci of Givenchy with some guests' dresses designed by designer Michael Costello. The couple's high status and respective careers have resulted in their relationship becoming subject to heavy media coverage; The New York Times referred to their marriage as "a historic blizzard of celebrity."

On October 2, 2016, while attending Paris Fashion Week, Kardashian was robbed at gunpoint in the apartment where she was staying. Five individuals, dressed as police officers, bound and gagged her, then stole $10 million worth of jewelry. The thieves got in her residence by threatening the concierge. Once they accessed Kardashian's room, they held a gun to her head, tying her wrists and legs and wrapping duct tape around her mouth as a gag. Kardashian, who was placed in the bathtub, was physically unharmed and reportedly begged for her life. She managed to wriggle her hands free from the plastic ties around her wrists and scream for help. The thieves escaped. On October 6, 2016, it was revealed that filming for the next season of Keeping up with the Kardashians had been placed "on hold indefinitely" after the robbery. Production resumed on October 26.

Kim Kardashian is a Christian and has described herself as "really religious". She was educated in Christian schools of both the Presbyterian and Roman Catholic traditions.

In April 2015, Kardashian and West traveled to the Armenian Quarter of the Old City in Jerusalem to have their daughter, North, baptized in the Armenian Apostolic Church. The ceremony took place at the Cathedral of St. James. Khloe Kardashian was appointed the godmother of North.