In this page you can download PNG image - Carriage PNG. 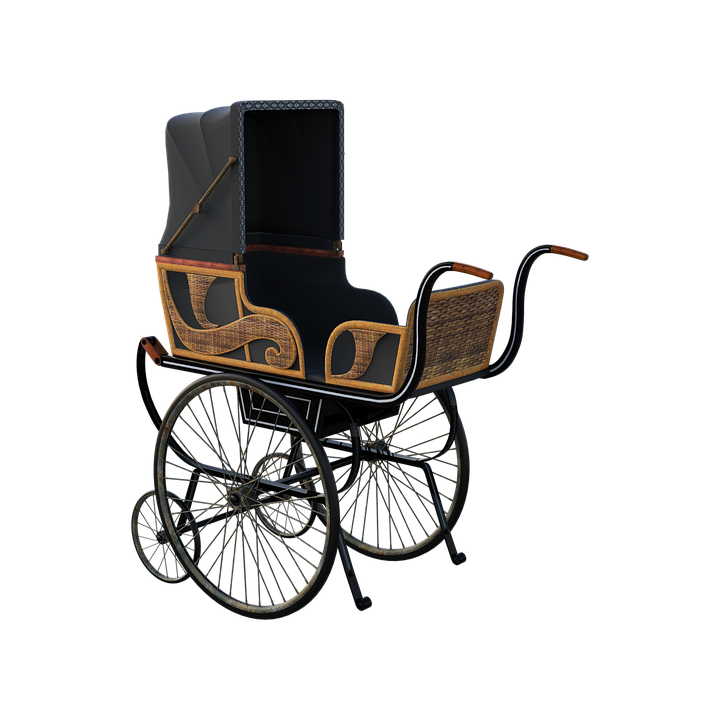 This image has format transparent PNG with resolution 720x720.
You can download this image in best resolution from this page and use it for design and web design.

A carriage is a wheeled vehicle for people, usually horse-drawn; litters (palanquins) and sedan chairs are excluded, since they are wheelless vehicles. The carriage is especially designed for private passenger use, though some are also used to transport goods. A public passenger vehicle would not usually be called a carriage – terms for such include stagecoach, charabanc and omnibus. It may be light, smart and fast or heavy, large and comfortable or luxurious. Carriages normally have suspension using leaf springs, elliptical springs (in the 19th century) or leather strapping. Working vehicles such as the (four-wheeled) wagon and (two-wheeled) cart share important parts of the history of the carriage, as does too the fast (two-wheeled) chariot.

The word carriage (abbreviated carr or cge) is from Old Northern French cariage, to carry in a vehicle. The word car, then meaning a kind of two-wheeled cart for goods, also came from Old Northern French about the beginning of the 14th century (probably derived from the Late Latin carro, a car); it was also used for railway carriages, and was extended to cover automobile around the end of the nineteenth century, when early models were called horseless carriages.

A carriage is sometimes called a team, as in "horse and team". A carriage with its horse is a rig. An elegant horse-drawn carriage with its retinue of servants is an equipage. A carriage together with the horses, harness and attendants is a turnout or setout. A procession of carriages is a cavalcade

A person whose business was to drive a carriage was a coachman. A servant in livery called a footman or piquer formerly served in attendance upon a rider or was required to run before his master's carriage to clear the way. An attendant on horseback called an outrider often rode ahead of or next to a carriage. A carriage starter directed the flow of vehicles taking on passengers at the curbside. A hackneyman hired out horses and carriages. When hawking wares, a hawker was often assisted by a carriage.

Upper-class people of wealth and social position, those wealthy enough to keep carriages, were referred to as carriage folk or carriage trade.

Carriage passengers often used a lap robe as a blanket or similar covering for their legs, lap and feet. A buffalo robe, made from the hide of an American bison dressed with the hair on, was sometimes used as a carriage robe; it was commonly trimmed to rectangular shape and lined on the skin side with fabric. A carriage boot, fur-trimmed for winter wear, was made usually of fabric with a fur or felt lining. A knee boot protected the knees from rain or splatter.

A horse especially bred for carriage use by appearance and stylish action is called a carriage horse; one for use on a road is a road horse. One such breed is the Cleveland Bay, uniformly bay in color, of good conformation and strong constitution. Horses were broken in using a bodiless carriage frame called a break or brake.

A carriage dog or coach dog is bred for running beside a carriage.

A roofed structure that extends from the entrance of a building over an adjacent driveway and that shelters callers as they get in or out of their vehicles is known as a carriage porch or porte cochere. An outbuilding for a carriage is a coach house, which was often combined with accommodation for a groom or other servants.

A livery stable kept horses and usually carriages for hire. A range of stables, usually with carriage houses (remises) and living quarters built around a yard, court or street, is called a mews.

A kind of dynamometer called a peirameter indicates the power necessary to haul a carriage over a road or track.

Carriages may be enclosed or open, depending on the type. The top cover for the body of a carriage, called the head or hood, is often flexible and designed to be folded back when desired. Such a folding top is called a bellows top or calash. A hoopstick forms a light framing member for this kind of hood. The top, roof or second-story compartment of a closed carriage, especially a diligence, was called an imperial. A closed carriage may have side windows called quarter lights (British) as well as windows in the doors, hence a "glass coach". On the forepart of an open carriage, a screen of wood or leather called a dashboard intercepts water, mud or snow thrown up by the heels of the horses. The dashboard or carriage top sometimes has a projecting sidepiece called a wing (British). A foot iron or footplate may serve as a carriage step.

A carriage driver sits on a box or perch, usually elevated and small. When at the front it is known as a dickey box, a term also used for a seat at the back for servants. A footman might use a small platform at the rear called a footboard or a seat called a rumble behind the body. Some carriages have a moveable seat called a jump seat. Some seats had an attached backrest called a lazyback.

The shafts of a carriage were called limbers in English dialect. Lancewood, a tough elastic wood of various trees, was often used especially for carriage shafts. A holdback, consisting of an iron catch on the shaft with a looped strap, enables a horse to back or hold back the vehicle. The end of the tongue of a carriage is suspended from the collars of the harness by a bar called the yoke. At the end of a trace, a loop called a cockeye attaches to the carriage.

In some carriage types the body is suspended from several leather straps called braces or thoroughbraces, attached to or serving as springs.