In this page you can download PNG image - Aikido PNG. 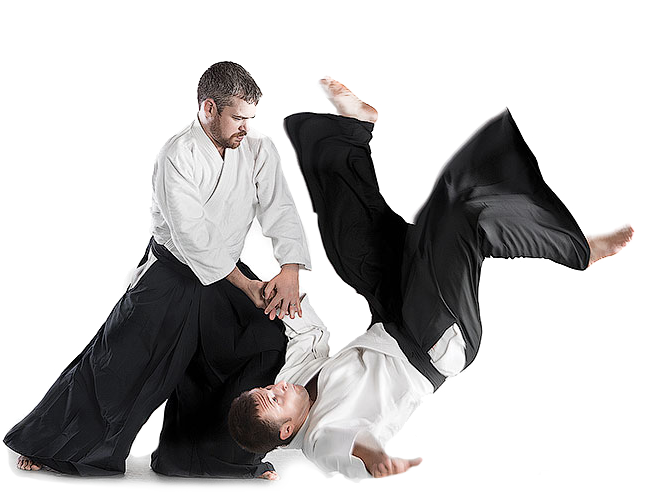 This image has format transparent PNG with resolution 645x492.
You can download this image in best resolution from this page and use it for design and web design.

Aikido is a modern Japanese martial art developed by Morihei Ueshiba as a synthesis of his martial studies, philosophy, and religious beliefs. Ueshiba's goal was to create an art that practitioners could use to defend themselves while also protecting their attacker from injury. Aikido is often translated as "the way of unifying (with) life energy" or as "the way of harmonious spirit".

Aikido was created by Morihei Ueshiba, referred to by some aikido practitioners as ?sensei (Great Teacher). The term aikido was coined in the twentieth century. Ueshiba envisioned aikido not only as the synthesis of his martial training, but as an expression of his personal philosophy of universal peace and reconciliation. During Ueshiba's lifetime and continuing today, aikido has evolved from the aiki that Ueshiba studied into a variety of expressions by martial artists throughout the world.

Ueshiba developed aikido primarily during the late 1920s through the 1930s through the synthesis of the older martial arts that he had studied. The core martial art from which aikido derives is Daiti-ryi aiki-jijutsu, which Ueshiba studied directly with Takeda Sikaku, the reviver of that art. Additionally, Ueshiba is known to have studied Tenjin Shin'y-ry with Tozawa Tokusaburi in Tokyo in 1901, Gotiha Yagyi Shingan-ryi under Nakai Masakatsu in Sakai from 1903 to 1908, and judo with Kiyoichi Takagi in Tanabe in 1911.

The art of Daiti-ryi is the primary technical influence on aikido. Along with empty-handed throwing and joint-locking techniques, Ueshiba incorporated training movements with weapons, such as those for the spear (yari), short staff, and perhaps the bayonet. However, aikido derives much of its technical structure from the art of swordsmanship (kenjutsu).

Ueshiba moved to Hokkaid? in 1912, and began studying under Takeda Sokaku in 1915. His official association with Dait?-ry? continued until 1937. However, during the latter part of that period, Ueshiba had already begun to distance himself from Takeda and the Daiti-ry. At that time Ueshiba was referring to his martial art as "Aiki Budi". It is unclear exactly when Ueshiba began using the name "aikido", but it became the official name of the art in 1942 when the Greater Japan Martial Virtue Society (Dai Nippon Butoku Kai) was engaged in a government sponsored reorganization and centralization of Japanese martial arts.

In aikido, as in virtually all Japanese martial arts, there are both physical and mental aspects of training. The physical training in aikido is diverse, covering both general physical fitness and conditioning, as well as specific techniques. Because a substantial portion of any aikido curriculum consists of throws, beginners learn how to safely fall or roll. The specific techniques for attack include both strikes and grabs; the techniques for defense consist of throws and pins. After basic techniques are learned, students study freestyle defense against multiple opponents, and techniques with weapons.

Physical training goals pursued in conjunction with aikido include controlled relaxation, correct movement of joints such as hips and shoulders, flexibility, and endurance, with less emphasis on strength training. In aikido, pushing or extending movements are much more common than pulling or contracting movements. This distinction can be applied to general fitness goals for the aikido practitioner.

In aikido, specific muscles or muscle groups are not isolated and worked to improve tone, mass, or power. Aikido-related training emphasizes the use of coordinated whole-body movement and balance similar to yoga or pilates. For example, many dojos begin each class with warm-up exercises, which may include stretching and ukemi (break falls).

The most common criticism of aikido is that it suffers from a lack of realism in training. The attacks initiated by uke (and which tori must defend against) have been criticized as being "weak", "sloppy", and "little more than caricatures of an attack". Weak attacks from uke allow for a conditioned response from tori, and result in underdevelopment of the skills needed for the safe and effective practice of both partners. To counteract this, some styles allow students to become less compliant over time but, in keeping with the core philosophies, this is after having demonstrated proficiency in being able to protect themselves and their training partners. Shodokan Aikido addresses the issue by practising in a competitive format. Such adaptations are debated between styles, with some maintaining that there is no need to adjust their methods because either the criticisms are unjustified, or that they are not training for self-defense or combat effectiveness, but spiritual, fitness or other reasons.

Another criticism pertains to the shift in training focus after the end of Ueshiba's seclusion in Iwama from 1942 to the mid-1950s, as he increasingly emphasized the spiritual and philosophical aspects of aikido. As a result, strikes to vital points by tori, entering (irimi) and initiation of techniques by tori, the distinction between omote (front side) and ura (back side) techniques, and the use of weapons, were all de-emphasized or eliminated from practice. Some Aikido practitioners feel that lack of training in these areas leads to an overall loss of effectiveness.

Conversely, some styles of aikido receive criticism for not placing enough importance on the spiritual practices emphasized by Ueshiba. According to Minoru Shibata of Aikido Journal, "O-Sensei's aikido was not a continuation and extension of the old and has a distinct discontinuity with past martial and philosophical concepts." That is, that aikido practitioners who focus on aikido's roots in traditional jujutsu or kenjutsu are diverging from what Ueshiba taught. Such critics urge practitioners to embrace the assertion that "[Ueshiba's] transcendence to the spiritual and universal reality were the fundamentals of the paradigm that he demonstrated."