In this page you can download PNG image - Thermos, vacuum flask PNG. 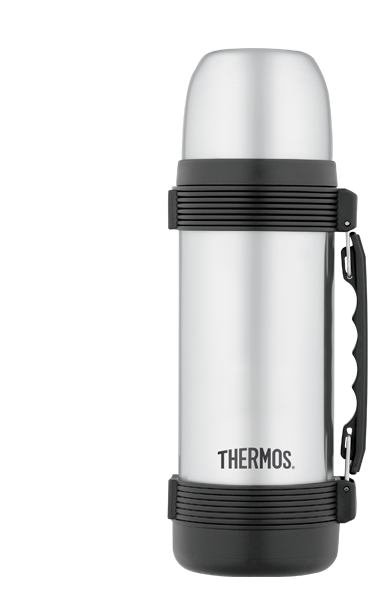 This image has format transparent PNG with resolution 390x600.
You can download this image in best resolution from this page and use it for design and web design.

A vacuum flask (also known as a Dewar flask, Dewar bottle or thermos) is an insulating storage vessel that greatly lengthens the time over which its contents remain hotter or cooler than the flask's surroundings. Invented by Sir James Dewar in 1892, the vacuum flask consists of two flasks, placed one within the other and joined at the neck. The gap between the two flasks is partially evacuated of air, creating a near-vacuum which significantly reduces heat transfer by conduction or convection.

Vacuum flasks are used domestically to keep beverages hot or cold for extended periods of time and for many purposes in industry.

The vacuum flask was designed and invented by Scottish scientist Sir James Dewar in 1892 as a result of his research in the field of cryogenics and is sometimes called a Dewar flask in his honour. While performing experiments in determining the specific heat of the element palladium, Dewar made a brass chamber that he enclosed in another chamber to keep the palladium at its desired temperature. He evacuated the air between the two chambers, creating a partial vacuum to keep the temperature of the contents stable. Through the need for this insulated container James Dewar created the vacuum flask, which became a significant tool for chemical experiments and also became a common household item. The flask was later developed using new materials such as glass and aluminum; however, Dewar refused to patent his invention.

Dewar's design was quickly transformed into a commercial item in 1904 as two German glassblowers, Reinhold Burger and Albert Aschenbrenner, discovered that it could be used to keep cold drinks cold and warm drinks warm. The Dewar flask design had never been patented but the German men who discovered the commercial use for the product renamed it "Thermos," and subsequently claimed both the rights to the commercial product and the trademark to the name. In his subsequent attempt to claim the rights to the invention, Dewar instead lost a court case to the company. The manufacturing and performance of the Thermos bottle was significantly improved and refined by the Viennese inventor and merchant Gustav Robert Paalen, who designed various types for domestic use, which he also patented, and distributed widely, through his Thermos Bottle Companies in the United States and Canada. The name later became a genericized trademark after the term "thermos" became the household name for such a liquid container. The vacuum flask went on to be used for many different types of scientific experiments and the commercial “Thermos” was transformed into a common item. "Thermos" remains a registered trademark in some countries, but it was declared a genericized trademark by court action in the United States in 1963, since it had become colloquially synonymous with vacuum flasks in general. However, there are other vacuum flasks.

After the German glassblowers determined the commercial uses for the Dewar flask, the technology was sold to the Thermos company, who used it to mass-produce vacuum flasks for at-home use. Over time, the company expanded the size, shapes and materials of these consumer products, primarily used for carrying coffee on the go and carrying liquids on camping trips to keep them either hot or cold. Eventually other manufacturers produced similar products for consumer use.