In this page you can download PNG image - Hummingbird PNG. 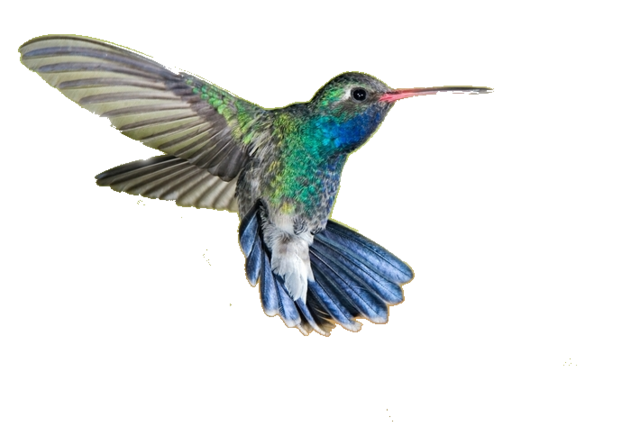 This image has format transparent PNG with resolution 640x426.
You can download this image in best resolution from this page and use it for design and web design.

Hummingbirds are birds native to the Americas that constitute the family Trochilidae. They are among the smallest of birds, most species measuring 7.5–13 cm (3–5 in) in length. Indeed, the smallest extant bird species is a hummingbird, the 5 cm (2.0 in) bee hummingbird weighing less than 2.0 g (0.07 oz).

They are known as hummingbirds because of the humming sound created by their beating wings which flap at high frequencies audible to humans. They hover in mid-air at rapid wing-flapping rates, which vary from around 12 beats per second in the largest species, to in excess of 80 in some of the smallest. Of those species that have been measured in wind tunnels, their top speed exceeds 15 m/s (54 km/h; 34 mph) and some species can dive at speeds in excess of 22 m/s (79 km/h; 49 mph).

Hummingbirds have the greatest mass-specific metabolic rate of any homeothermic animal. To conserve energy when food is scarce, and nightly when not foraging, they can go into torpor, a state similar to hibernation, slowing metabolic rate to 1/15th of its normal rate.

Hummingbirds exhibit sexual size dimorphism according to Rensch's rule, in which males are smaller than females in small species, and males are larger than females in large-bodied species. The extent of this sexual size difference varies among clades of hummingbirds. For example, the Mellisugini clade exhibits a large size dimorphism, with females being larger than males. Conversely, the Lophomithini clade displays very little size dimorphism; males and females are similar in size. Sexual dimorphisms in bill size and shape are also present between male and female hummingbirds, where in many clades, females have longer, more curved bills favored for accessing nectar from tall flowers. For males and females of the same size, females will tend to have larger bills.

Female hummingbirds tend to be larger, requiring more energy, with longer beaks that allow for more effective reach into crevices of tall flowers for nectar. Thus females are better at foraging, acquiring flower nectar, and supporting the energy demands of their larger body size. Directional selection will thus favor the larger hummingbirds in terms of acquiring food.

Another evolutionary cause of this sexual bill dimorphism is that the selective forces from competition for nectar between the sexes of each species are what drive the sexual dimorphism. Depending on which sex holds territory in the species, it is advantageous for the other sex to have a longer bill and be able to feed on a wide variety of flowers, decreasing intraspecific competition. For example, in species of hummingbirds where males have longer bills, males do not hold a specific territory and have a lek mating system. In species where males have shorter bills than females, males defend their resources and therefore females must have a longer bill in order to feed from a broader range of flower.

To serve courtship and territorial competition, many male hummingbirds have plumage with bright, varied coloration resulting both from pigmentation in the feathers and from prism-like cells within the top layers of feathers of the head, gorget, breast, back and wings. When sunlight hits these cells, it is split into wavelengths that reflect to the observer in varying degrees of intensity, with the feather structure acting as a diffraction grating. Iridescent hummingbird colors result from a combination of refraction and pigmentation, since the diffraction structures themselves are made of melanin, a pigment, and may also be colored by carotenoid pigmentation and more subdued black, brown or gray colors dependent on melanin.

By merely shifting position, feather regions of a muted-looking bird can instantly become fiery red or vivid green. In courtship displays for one example, males of the colorful Anna's hummingbird orient their bodies and feathers toward the sun to enhance the display value of iridescent plumage toward a female of interest.