In this page you can download PNG image - Moose, elk PNG. 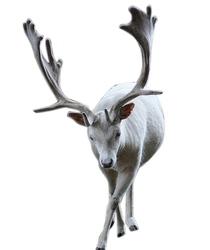 This image has format transparent PNG with resolution 210x250.
You can download this image in best resolution from this page and use it for design and web design.

The moose (North America) or elk (Eurasia), Alces alces is a member of the New World deer subfamily and is the largest and heaviest extant species in the Deer family. Moose are distinguished by the broad, palmate (open-hand shaped) antlers of the males; other members of the deer family have antlers with a dendritic ("twig-like") configuration. Moose typically inhabit boreal forests and temperate broadleaf and mixed forests of the Northern Hemisphere in temperate to subarctic climates. Hunting and other human activities have caused a reduction in the size of the moose's range over time. Moose have been reintroduced to some of their former habitats. Currently, most moose are found in Canada, Alaska, New England (with Maine having the most of the lower 48 states), Fennoscandia, Baltic states, and Russia. Their diet consists of both terrestrial and aquatic vegetation. The most common moose predators are the gray wolf along with bears and humans. Unlike most other deer species, moose do not form herds and are solitary animals, aside from calves who remain with their mother until the cow begins estrus (typically at 18 months after birth of the calf), at which point the cow chases away young bulls. Although generally slow-moving and sedentary, moose can become aggressive and move quickly if angered or startled. Their mating season in the autumn features energetic fights between males competing for a female.

Moose require habitat with adequate edible plants (e.g., pond grasses, young trees and shrubs), cover from predators, and protection from extremely hot or cold weather. Moose travel among different habitats with the seasons to address these requirements. Moose are cold-adapted mammals with thickened skin, dense, heat-retaining coat, and a low surface:volume ratio, which provides excellent cold tolerance but poor heat tolerance. Moose survive hot weather by accessing shade or cooling wind, or by immersion in cool water. In hot weather, moose are often found wading or swimming in lakes or ponds. When heat-stressed, moose may fail to adequately forage in summer and may not gain adequate body fat to survive the winter. Also, moose cows may not calve without adequate summer weight gain. Moose require access to both young forest for browsing and mature forest for shelter and cover. Forest disturbed by fire and logging promotes the growth of fodder for moose. Moose also require access to mineral licks, safe places for calving and aquatic feeding sites.

Moose avoid areas with little or no snow as this increases the risk of predation by wolves and avoid areas with deep snow, as this impairs mobility. Thus, moose select habitat on the basis of trade-offs between risk of predation, food availability, and snow depth. With reintroduction of bison into boreal forest, there was some concern that bison would compete with moose for winter habitat, and thereby worsen the population decline of moose. However, this does not appear to be a problem. Moose prefer sub-alpine shrublands in early winter, while bison prefer wet sedge valley meadowlands in early-winter. In late-winter, moose prefer river valleys with deciduous forest cover or alpine terrain above the tree line, while bison preferred wet sedge meadowlands or sunny southern grassy slopes.