In this page you can download PNG image - Leonid Brezhnev PNG. 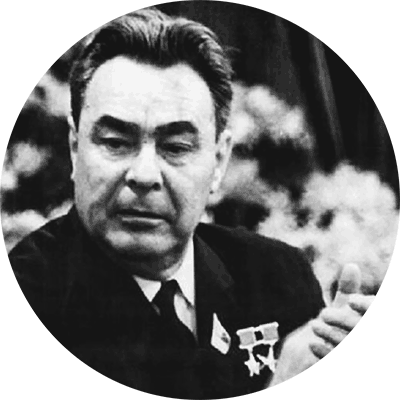 Leonid Brezhnev (19 December 1906 (O.S. 6 December) – 10 November 1982) was a Soviet politician of Ukrainian nationality, who led the Soviet Union from 1964 to 1982 as the General Secretary of the Central Committee (CC) of the Communist Party of the Soviet Union (CPSU), presiding over the country until his death and funeral in 1982. His eighteen-year term as General Secretary was second only to that of Joseph Stalin in duration. During Brezhnev's rule, the global influence of the Soviet Union grew dramatically, in part because of the expansion of the Soviet military during this time. His tenure as leader was also marked by the beginning of an era of economic and social stagnation in the Soviet Union.

Brezhnev was born in Kamenskoye, Russian Empire (now Kamianske, Ukraine), into a Russian worker's family in 1906. After graduating from the Kamenskoye Metallurgical Technicum, he became a metallurgical engineer in the iron and steel industry, in Ukraine. He joined the Komsomol in 1923 and became an active member of the CPSU by 1929. With the onset of World War II, he was drafted into immediate military service and left the army in 1946 with the rank of major general. In 1952, Brezhnev was promoted to the Central Committee and, in 1957 to full member of the Politburo. In 1964, he succeeded Nikita Khrushchev as First Secretary of the Communist Party of the Soviet Union.

As the leader of the Soviet Union, Brezhnev's conservatism and carefulness to reach decisions by consensus within the Politburo resulted in sustained political stability within the party and the country. However, his hostility towards reform and tolerance of corruption ushered in a period of socioeconomic decline that came to be known as the Brezhnev Stagnation. On the world stage, Brezhnev pushed hard for the adoption of d?tente to relax tensions and foster economic cooperation between the two Cold War superpowers. Despite such diplomatic gestures, Brezhnev's regime presided over widespread military interventionism and a massive arms buildup that ultimately grew to comprise 12.5% of the nation's GNP.

After years of declining health, Brezhnev died on 10 November 1982 and was quickly succeeded in his post as General Secretary by Yuri Andropov. Upon coming to power in 1985, Mikhail Gorbachev denounced his regime's pervasive inefficiency and inflexibility before overseeing steps to liberalize the Soviet Union.