In this page you can download PNG image - letter F PNG. 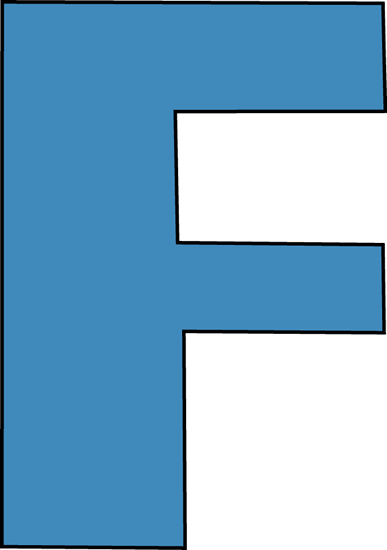 This image has format transparent PNG with resolution 387x550.
You can download this image in best resolution from this page and use it for design and web design.

F is the sixth letter in the modern English alphabet and the ISO basic Latin alphabet.

The Phoenician form of the letter was adopted into Greek as a vowel, upsilon (which resembled its descendant 'Y' but was also the ancestor of the Roman letters 'U', 'V', and 'W'); and, with another form, as a consonant, digamma, which indicated the pronunciation /w/, as in Phoenician. Latin 'F,' despite being pronounced differently, is ultimately descended from digamma and closely resembles it in form.

After sound changes eliminated /w/ from spoken Greek, digamma was used only as a numeral. However, the Greek alphabet also gave rise to other alphabets, and some of these retained letters descended from digamma. In the Etruscan alphabet, 'F' probably represented /w/, as in Greek, and the Etruscans formed the digraph 'FH' to represent /f/. (At the time these letters were borrowed, there was no Greek letter that represented /f/: the Greek letter phi '?' then represented an aspirated voiceless bilabial plosive /p?/, although in Modern Greek it has come to represent /f/.) When the Romans adopted the alphabet, they used 'V' (from Greek upsilon) not only for the vowel /u/, but also for the corresponding semivowel /w/, leaving 'F' available for /f/. And so out of the various vav variants in the Mediterranean world, the letter F entered the Roman alphabet attached to a sound which its antecedents in Greek and Etruscan did not have. The Roman alphabet forms the basis of the alphabet used today for English and many other languages.