In this page you can download PNG image - Nuclear bomb PNG. 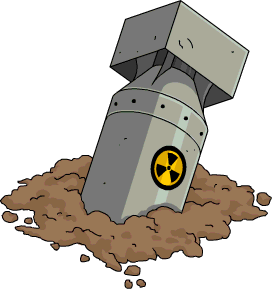 This image has format transparent PNG with resolution 272x289.
You can download this image in best resolution from this page and use it for design and web design.

A nuclear weapon is an explosive device that derives its destructive force from nuclear reactions, either fission (fission bomb) or from a combination of fission and fusion reactions (thermonuclear bomb). Both bomb types release large quantities of energy from relatively small amounts of matter. The first test of a fission ("atomic") bomb released an amount of energy approximately equal to 20,000 tons of TNT (84 TJ). The first thermonuclear ("hydrogen") bomb test released energy approximately equal to 10 million tons of TNT (42 PJ). A thermonuclear weapon weighing little more than 2,400 pounds (1,100 kg) can release energy equal to more than 1.2 million tons of TNT (5.0 PJ). A nuclear device no larger than traditional bombs can devastate an entire city by blast, fire, and radiation. Since they are weapons of mass destruction, the proliferation of nuclear weapons is a focus of international relations policy.

Since the atomic bombings of Hiroshima and Nagasaki, nuclear weapons have been detonated over two thousand times for testing and demonstration. Only a few nations possess such weapons or are suspected of seeking them. The only countries known to have detonated nuclear weapons—and acknowledge possessing them—are (chronologically by date of first test) the United States, the Soviet Union (succeeded as a nuclear power by Russia), the United Kingdom, France, China, India, Pakistan, and North Korea. Israel is believed to possess nuclear weapons, though, in a policy of deliberate ambiguity, it does not acknowledge having them. Germany, Italy, Turkey, Belgium and the Netherlands are nuclear weapons sharing states. South Africa is the only country to have independently developed and then renounced and dismantled its nuclear weapons.

The Treaty on the Non-Proliferation of Nuclear Weapons aims to reduce the spread of nuclear weapons, but its effectiveness has been questioned, and political tensions remained high in the 1970s and 1980s. Modernisation of weapons continues to this day.