In this page you can download PNG image - Nuclear explosion PNG. 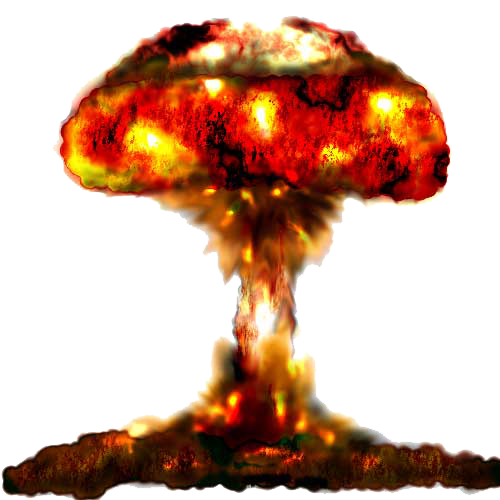 A nuclear explosion is an explosion that occurs as a result of the rapid release of energy from a high-speed nuclear reaction. The driving reaction may be nuclear fission or nuclear fusion or a multi-stage cascading combination of the two, though to date all fusion-based weapons have used a fission device to initiate fusion, and a pure fusion weapon remains a hypothetical device.

Only two nuclear weapons have been deployed in combat—both by the United States against Japan in World War II. The first event occurred on the morning of 6 August 1945, when the United States Army Air Forces dropped a uranium gun-type device, code-named "Little Boy", on the city of Hiroshima, killing 70,000 people, including 20,000 Japanese combatants and 20,000 Korean slave laborers. The second event occurred three days later when the United States Army Air Forces dropped a plutonium implosion-type device, code-named "Fat Man", on the city of Nagasaki. It killed 39,000 people, including 27,778 Japanese munitions employees, 2,000 Korean slave laborers, and 150 Japanese combatants. In total, around 119,000 people were killed in these bombings. (See Atomic bombings of Hiroshima and Nagasaki for a full discussion). Nuclear weapons are largely seen as a 'deterrent' by most governments; the sheer scale of the destruction caused by a nuclear weapon has prevented serious consideration of their use in warfare, rendering the concept of total war completely useless.

The dominant effects of a nuclear weapon (the blast and thermal radiation) are the same physical damage mechanisms as conventional explosives, but the energy produced by a nuclear explosive is millions of times more per gram and the temperatures reached are in the tens of megakelvin. Nuclear weapons are quite different from conventional weapons because of the huge amount of explosive energy they can put out and the different kinds of effects they make, like high temperatures and nuclear radiation.

The devastating impact of the explosion does not stop after the initial blast, as with conventional explosives. A cloud of nuclear radiation travels from the epicenter of the explosion, causing an impact to life forms even after the heat waves have ceased.

Any nuclear explosion (or nuclear war) would have wide-ranging, long-term, catastrophic effects. Radioactive contamination would cause genetic mutations and cancer across many generations.